A cup of coffee, a Nature, a drop of whiskey, an ACS Nano, Life is full of science

why people use coffee and whiskey can send the article it?

coffee ring effect, means that when a drop of coffee or tea dropped on the desktop, which particulate matter will leave a stain on the desktop staining. The stain color deeper than an intermediate edge, forming an annular spot phenomenon. In 1997, the University of Chicago and so that generation effect Deegan \”coffee ring\” due to the edge of the droplet evaporation rate greater than the center of the evaporation rate, resulting in a capillary flow of a liquid droplet inside outwardly, the suspended particles are deposited to the edge of the droplet ring. Papers related to \”Capillary flow as the cause of ring stains from dried liquid drops\” was published in \” Nature \” in 1997. This experiment demonstrates that we can in fact change the morphology of the particles can be eliminated, which is to proceed from the nature of the particles, to eliminate the effect, which provides a new method for coating engineer. 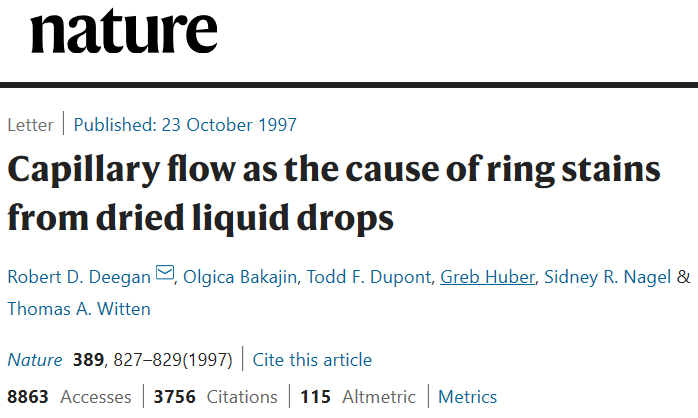 whiskey (Whisky, Whiskey) is a brewed from barley and other grains, after years of aging in oak barrels, about 43 degrees formulated spirits distilled spirits. British called \”Water for Life.\” According to the origin can be divided into: Scotch whiskey, Irish whiskey, American whiskey and Canadian whiskey four categories. U.S. distilled from a whiskey spirits, ABV (alcohol by volume) when the bottle is not less than 40%. American whiskey includes a wide variety of whiskey, such as bourbon, rye whiskey, whiskey and wheat, its main feature is in the process of mashing the grain mix to add flavor. During the fermentation process, homologues (congeners) formed as secondary products from side reactions determines the ultimate whiskey taste. Homologs include phenols, aromatic, esters, aldehydes and the like. Whiskey during storage, the composition of the liquid extracted wood will be constantly, continuously and whiskey different reaction between the organic matter. American whiskey whiskey different from other places is that the new oak barrel aging process to use. The new American oak barrels so that the solid content of whiskey higher. So, in addition to these, what difference will it make? For the Department of Chemistry is not a tasting of the small series how to differentiate it? Do not worry, University of Louisville United States Stuart J. Williams team presented to us The method of identifying American whiskey . Their study, entitled \”Multiscale Self-Assembly of Distinctive Weblike Structures from Evaporated Dilute American Whiskeys\” article in the authoritative journal \” ACS Nano \” published.

of the volatile American whiskey droplets evaporate, the droplets evaporate after the discovery will leave hierarchical mesh pattern, and to call \”whiskey web\”. I have to say the authors observe really carefully.

Here we demonstrate a wide variety of authors under the \”whiskey web\” pattern. OF whiskey diluted various existing products, such alcohol content was maintained between 20-25 vol.%, And then drying the droplets, it can be of about 2mm diameter of a pattern. Whiskey back to itself, many are amphiphilic organic components contained in whiskey and dissolved in ethanol. After whiskey diluted with water and the amphiphilic molecule will lead to aggregate into agglomerates Nami Wei degrees, as shown in FIG OF Tyndall effect demonstrated by formation of nano aggregates. 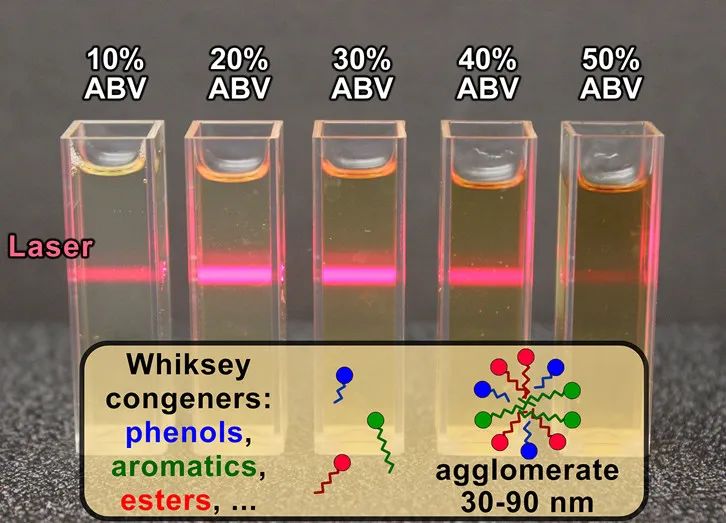 [exactly how did this happen]

The authors first explore whether such a structure on the floor or in the liquid – vapor interface formed. Manual focus will find that the droplet formed on the surface layer of the liquid film, indicating that the structure is in a liquid – vapor interface is formed, a monomolecular layer forming means and collapse. As shown, when the original image 1 min axisymmetric; 4 minutes, with the collapse of monolayers, the reflectance becomes distorted; continuous monolayer on the droplet surface collapse, the droplet is completely evaporated once (9 min), the features of these becomes more apparent. It can clearly be seen a side view of the evaporation process interface modification, can be described in a liquid – a force gradually produce a non-uniform air interface. [12During 3]

is formed in the whiskey web, mobile and self-assembled monolayer FIG. Wherein (a) a first phase is unstable, the liquid is driven into the ethanol molecules – gas interface, changing the composition and formation of monomolecular layer; (b) in the evaporation process, the interface area of ​​the droplet gradually decreases, monolayers collapse occurred.

When whiskey diluted in the range of 15-25% ABV form whiskey web. When the alcohol concentration of the

dilution of less than 10 vol.%, It will form a coffee ring (a), but long fermentation U.S. whiskey coffee can not form a ring (b). With increasing solute concentration, it would inhibit the formation of the coffee ring. Alcohol concentration is increased to reduce monolayer collapse reasons include: 1 in the process of rising alcohol concentration, the more chemicals will dissolve, monolayer more liquid, reducing the possibility of occurrence of collapse; 2. the high concentration of alcohol reduces the surface area of ​​the water once the alcohol evaporates, will reduce the probability of collapse a monolayer on the remaining solution; 3. before study of chemically active whiskey shows that the higher the concentration of aggregates the lower the volatility. Described above can be formed whiskey web requires specific chemical composition and concentration of alcohol. Each figure shows the homolog in a unique manner will affect the formation of whiskey web structure. However, the prediction is whiskey homologues affect how monomolecular layer further collapse somewhat difficult. Collapse Behavior chemically homogeneous monolayers not associated with the response non-uniformity of the monolayers. Effect of the current still a large number of experiments to determine the particular combination of homologs of monolayer formation and collapse process. Perhaps there will then drink a little whimsy of it. 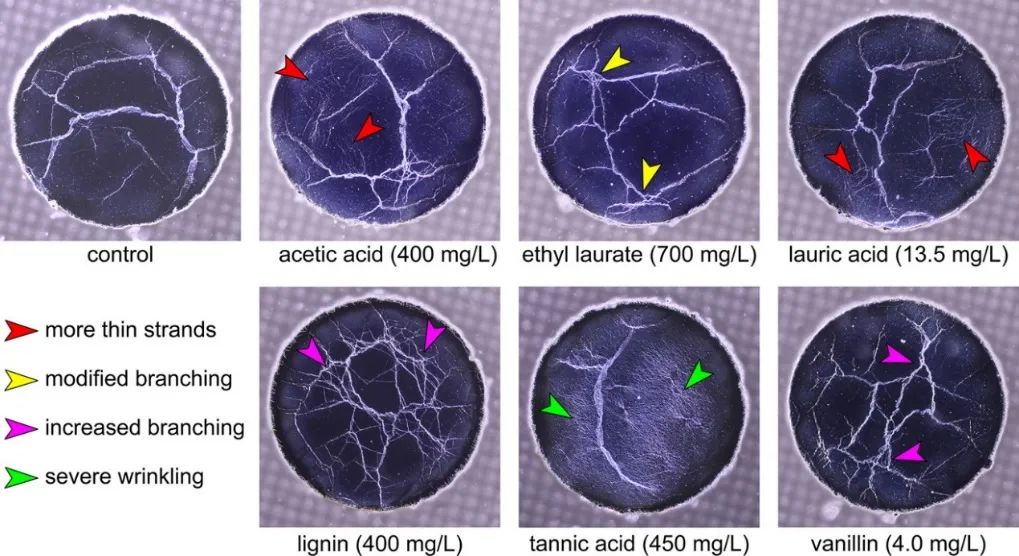 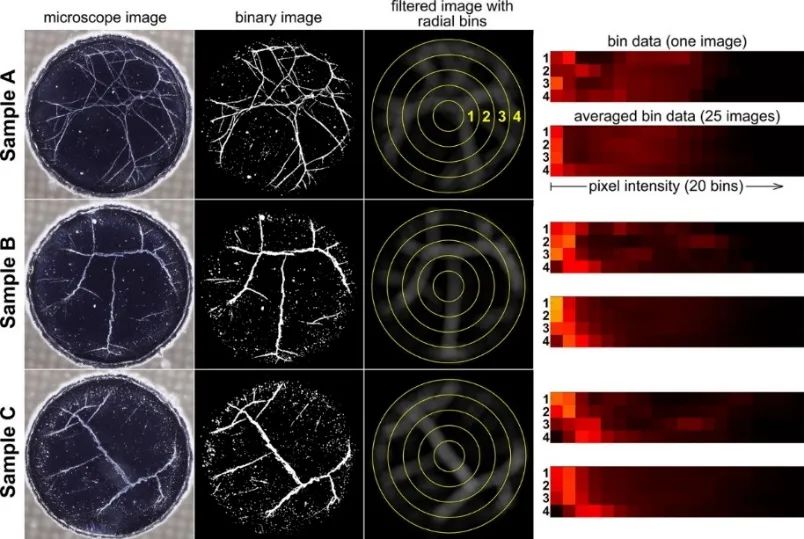