renewable energy and carbon dioxide, the carbon dioxide is electrochemically reduced as chemical feedstocks, either can reduce the use of fossil fuels, and can effectively reduce the atmospheric carbon dioxide, has multiple purposes. When the target is CO 2 when reduced to more valuable products more carbon, copper has been the main electrocatalyst this reaction, when the reduction target of ethylene was still need to improve the process. Carnegie Mellon University Professor Zachary Ulissi and the University of Toronto in Canada Edward H. Sargent Academy of Sciences cooperation use copper and aluminum electrocatalyst theoretical density function and a combination of active learning machine identification, the catalyst effective to reduce carbon dioxide to ethylene, to achieve the maximum Faraday efficiency reported so far , when the current density was 400 mA / cm 2 (voltage 1.5V, a reversible hydrogen electrode), the Faraday efficiency More than 80% of the (the Faraday efficiency of about 66% copper), the current density of 150 mA / cm 2 , a cathode side (half cell) ethylene power conversion efficiency was 55 ± 2%. The results show that: the copper alloy surfaces and provide a plurality of alignment positions, all but the most conducive to binding of CO, can be efficient and selective CO 2 reduction. Situ X-ray tests showed that: Cu Al and Cu capable of forming a favorable coordination environment, promote the C-C dimer. This proved the value in computing and machine learning experiments to explore the guidance beyond the traditional single-metal electrocatalyst limitations of multi-metal system in. 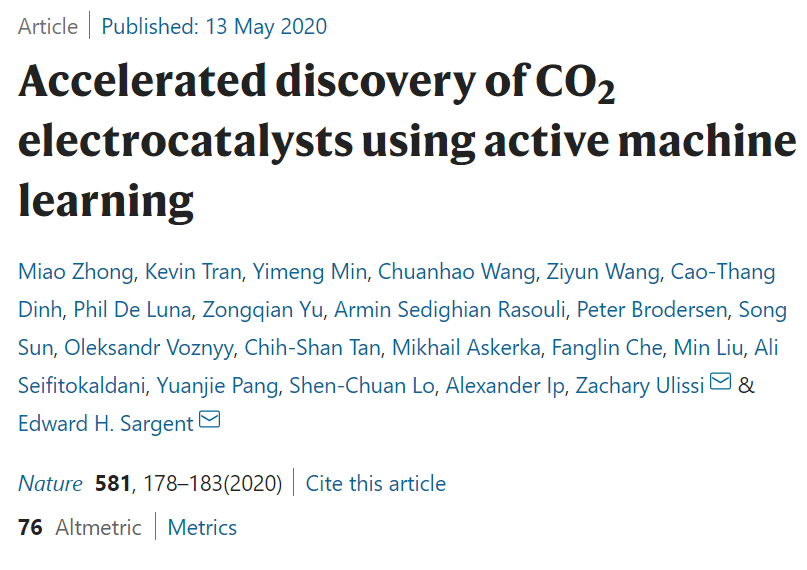 6 March \”Science\” tandem solar cell efficiency, 25.7% efficiency breakthrough! [The solar cell 123] having a smaller bandgap stacked to form a double conjunctiva, expected to overcome the single-junction photovoltaic cell Shockley-Queisser limit. The rapid development of a solid solution of perovskite brought a perovskite single-junction efficiency of> 20%. However, this process has not been associated with industry can be textured crystalline silicon solar cell for monolithic integration.

University of Toronto, Canada, Edward H. Sargent Academy of Sciences and King Abdullah University of Science and Technology Stefaan De Wolf cooperation , perovskite micron top of the battery was treated with a full texture crystalline silicon hetero-junction bottom cell combined to form dual-stack battery. Papers related to \”Efficient tandem solar cells with solution-processed perovskite ontextured crystalline silicon\” in the title, today published in \”Science\”. To overcome the challenges micron perovskite charge collection, the depletion width at the bottom of the TF silicon pyramid tripled. Further, by limiting the self-passivating agents (butanethiol) was immobilized on the surface of perovskite, increasing the diffusion length and further inhibits phase separation. These combined enhancements perovskite silicon tandem solar cell independent certification power conversion efficiency of 25.7%. These devices can be subjected to a thermal stability test for 400 hours at 85 ° C, and the maximum power point tracking at 40 ° C 400 hours, the performance loss is negligible. 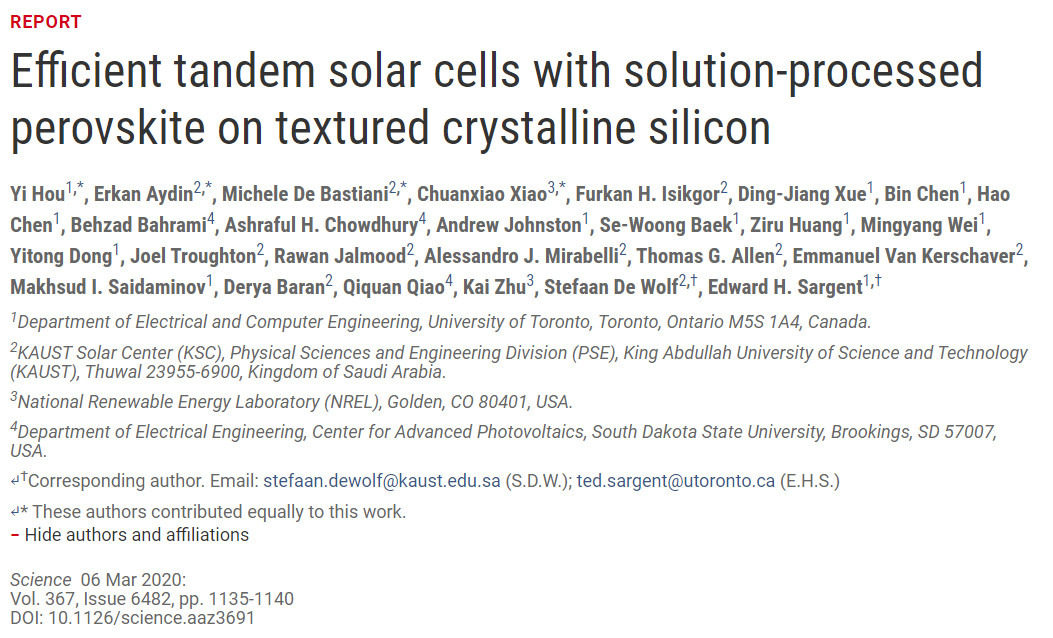 2 reduction of CO, and multi-carbon organic matter is expected to alleviate the current energy crisis and the growing prominence of environmental issues. General electrolysis catalyst device needs to be provided in an aqueous solution by the electrolysis of water to organic carbon multiple proton, which led to a serious problem: CO 2 in an aqueous solution diffusion poor ability (diffusion in alkaline solution length of only several tens of nanometers), thus resulting in a low current density electrolysis (<100 mA cm -2 ) and a low energy conversion efficiency, at the same time, since the catalytic reaction in the electrolytic gas (CO 2 ) – the solid (catalyst) – liquid (electrolyte) three-phase composite zone, the hydrophilic layer may be corroded catalyst activity at high alkaline electrolyte into the environment, resulting in increased catalytic activity and decreasing hydrogen evolution reaction. Based on this, 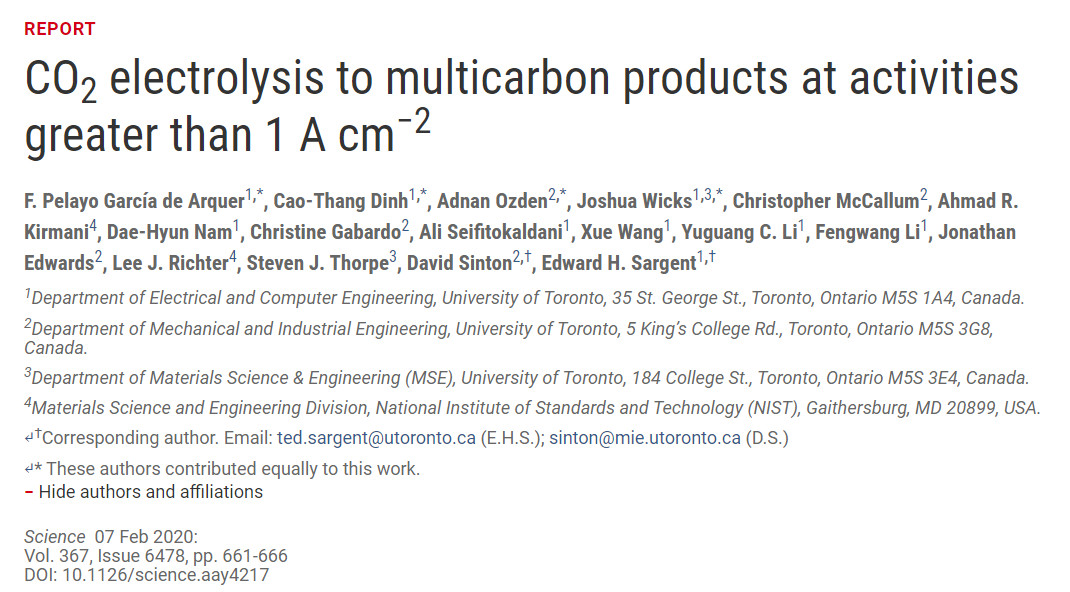 the University of Toronto Professor Edward H. Sargent joint team Professor David Sinton team design of the capable of decoupling the gas ions and electrons metalliferous – electrolytic ionic polymer composite catalytic system (CIBH) , the electrolysis CO.\’s 2 when preparing a multi-carbon compound current density exceeds 1 A cm -2 , for the current the highest value reported. Selection of with hydrophilic -SO 3 – group and a hydrophobic -CF 2 radical polymerization of perfluorosulfonic acid (PFSA ) coated on this catalyst surface is achieved CIBH structure , a hydrophilic group of the surface of the coating layer so as to contact the catalyst with the electrolyte in contact sufficiently wetted, facilitate the generation of protons, and the internal hydrophobic facilitate the passage CO 2 of the transmission. The results showed that only the thickness of the coating layer can be made of 5-10nm CO 2 to to enhance the diffusion length of nearly 400-fold , to the micron level. The structures were applied to the group of Ag and Cu catalysts were CO 2 prepared by reduction of CO, Ag-CIBH Cu-CIBH and current density, respectively, of the catalytic system can reach 400 m Acm -2 [ 123], and 340 m Acm -2 , while the original current density of Ag and Cu catalysts were only 54 mA cm -2 and 64 mA cm -2 . On this concept, the design of the 3D Cu- CIBH catalyst system, in 7M KOH electrolyte CO 2 the flow rate reached 50 cm 3 min -1 , the maximum current density of 1.32 a cm -2 , the cathode to improve the energy efficiency by 45%, this technique greatly enhance the catalytic electrolysis CO 2 preparation of multi carbon organics its feasibility iNDUSTRIAL ( \”Science\”: a record rate, the carbon dioxide is converted to ethylene !).

上一个：A record pace, the carbon dioxide is converted to ethylene!