A system to do more than a decade, grind 5 \”Science\”! These micelles morphology of the United States to suffocating!

In 2005, Science 125 anniversary of the founding presented 125 scientific problems facing the most challenging to address the 21st century, \”Can we push chemical self-assembly go far?\” (How far can we ? push chemical self-assembly) was introduced as an important scientific issue a chemistry (Science release: global challenges topic frontier top 125) . Self-assembly is an important method to create new materials, new structures and new functions can be defined as self-assembled by molecular bonding interactions units spontaneously reversible process organized into ordered structures non-covalently in the classical sense . In nature, life is a natural chemical self-assembly (self-assembly) and the perfect embodiment of the highest level. via self-assembly is both important structure of tissues, cells and various life activities, but also the interaction between the substance linked to natural means. Through the study of the nature of the substance contact, explore self-assembly system development needs for human life, become an increasingly urgent need. Carried out by a conventional amorphous polymer block assembly, can be a variety of micro-nano structures sphere, rod, flowers, tubes, vesicles, etc. However, these polymeric micelles are very difficult to control the growth and post-modification. Nearly twelve years ago, Ian Manners and Mitchell A. Winnik published the first \”activity on Science self-assembled \” policy-mediated self-assembly solution. For some poly ferrocene silane, polyethylene, polylactic acid, polythiophene crystalline – amorphous block copolymers, because of its presence in the epitaxially grown crystal nuclei, the block polymer is added in the same solution to continue to self-assemble at the end of the original micelles, which in turn can form micelles new extension block. The new block copolymers still have an active site, can ensure the continued growth of the whole system, such a self-assembly process referred to as \”active self-assembled\” program. Follow this scheme, a series of one-dimensional, two-dimensional, three-dimensional nanostructures are ordered regular Science , Nature Mater. , JACS , Adv. Mater. and Angew. Chem. and other well-known publications have reported. Today we have to review \”active self-assembled\” of twelve years: First Part Science: length and structure controllable co-micelles and cylindrical micelles block copolymer [123 ] traditional block polymers tend to form spherical micelles in solution, and only a small component of the block polymer may be a cylindrical rod-like micelles in solution. Because of the idiosyncratic crystalline polylactic ferrocene silane, such as a block polymer consisting of polyethylene ferrocenylsilanes –

while adding an appropriate amount of this solution of PFS53-PI320 of the copolymer in tetrahydrofuran or toluene solution, micelles can be correspondingly epitaxial growth . by the dynamic light scattering to quantify the length of the micelle, the authors found that addition of 0.5 mg respectively PFS53-PI320 average length of the original micelles of 250 nm (FIG. 1 B), 1 mg (FIG. 1 C) and 2 mg (FIG. 1 D) After PFS53-PI320 of tetrahydrofuran (0.1 mL), the long cylindrical micelles are respectively increased to ~ 500, 750, and 2000 nm, which is roughly proportional to the amount of added PFS53-PI320.

The second Science: unidirectional growth noncentrosymmetric cylindrical micelles Traditional self-assembly, and the series of assembly embodiment previously reported, including an \”active self-assembled\” scheme, can be obtained only symmetric micelles (FIG. 4A). This is because the micelles are conventional in both ends of the active sites exist, if one end of the extension may be prevented by appropriate means micelles, polymeric micelles can then perform specific growth along the other end, can be to give non-centrosymmetric structure of novel micelles. Found OF PI after the end of the corresponding cross-linking reaction, so that this end can be directly deactivated, this provides the feasibility to achieve the growth direction of the single micelle. The micelles of the triblock M ends of the PI (PI1424-PFS63) -b-M (PFS60-PDMS600) -b-M (PI1424-PFS63) a crosslinking reaction, and selectively removing the corresponding midblock, to give the sub-micelles have a single active site (FIG. 4B). Was added a solution of active polymer in a sub-micelles have a single active site, as PFS60-b-PDMS660 novel solution to obtain a single micelle XLM growth direction (PI1424-b-PFS63) -bM (PFS60-b-PDMS660 ), in addition, with the increase in the polymer solution, the micelles grow in a single direction corresponding end may become longer, which is asymmetrical construction provides a novel micelle solution.

Part III Science: Multidimensional Hierarchy cylindrical micelles of amphiphilic self-assembly \”active self-assembled\” in constructing a simple, controllable length and structure of cylindrical micelles , it has already demonstrated a very big advantage. How can the \”active self-assembly\” has been multi-dimensional levels of cylindrical micelles is still a question worth pondering. By skillfully selecting the hydrophilic and lipophilic groups, polymeric micelles prepared exquisitely multidimensional hierarchy in a suitable solvent, is particularly important. In the previous Science, the authors found that provides an effective way to create new topography of micelles prepared by two tri-block amphiphilic micelles, so in this post, the authors focus on the design of amphiphilic triblock rubber beam, to build more complex micelle structure by changing the structure of the hydrophilic and lipophilic block, try \”active self-assembly.\”

Part IV Science: derived from the crystalline polymeric co and a sheet-like homogeneous blend hollow rectangular micelles in addition to one-dimensional columnar, three-dimensional superlattice structure, how the \”active self-assembly\” get some other two-dimensional structures, still inspire Study interested persons. The researchers found that the polymer (PFS36-b-P2VP502 and PFS20 homopolymer or PFS36-b-PDMS560 and PFS20 monopolymer) was added in the mixing of the two components obtained by PFS28-b-PDMS560 cylindrical micelles in solution , dominated by isopropanol isopropanol / hexane mixture, to give the corresponding rectangle can micelles. Such causes of new 2D rectangular PFS micelles that less components, a mixture of polymers added to the new epitaxial growth tends to tail and side of the original cylindrical micelles. Furthermore, in rectangular micelles obtained (PFS36-b-P2VP502 and PFS20 monopolymer) prepared PFS28-b-PDMS560 and the P2VP block by the use of crosslinking metallic Pt, and selectively removing embedded in THF PDMS560 section having a hollow structure can be obtained2D rectangle micelles. 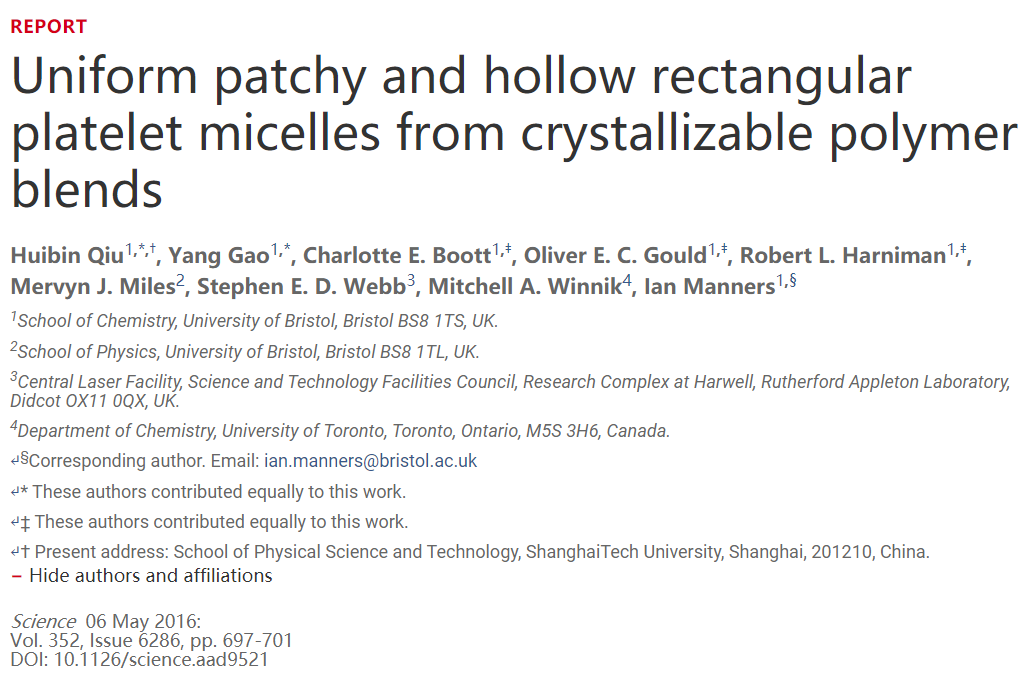 Qiuhui Bin and Professor Ian Manners together again reported for \”active self-assembled\” the material surface by poly (ferrocenyl dimethylsilane) – poly (2 vinylpyridine) (PFS-b-P2VP) hydrogen bonding of silicon and P2VP, PFS36-b-P2VP502 micelle core may be a seed planted in the surface of the wafer, addition of various amounts of growth micellar solution PFS20-b after -P2VP140, micelles may be in the surface of the wafer \”Grass-like \”growth, the growth of the micelles and this length of about newly added amount of micelles (FIG. 11A-D). At the same time this hydrophilic-lipophilic properties of the wafer surface by the dropwise addition of a micelle solution corresponding micellar growth control, such as the growth of micelles by the addition of PFS-b-P2VP into PFS-b-PDMS, the surface contact angle from 68 ° to corresponding changes 107 ° (FIG. 11E-F). Since the 2-vinylpyridine modifying group having an adjustable length and of late, after the growth of the micelle surface of silicon brush can be protonated to obtain micelles having a highly hydrophilic surface, while since the coordination and the in situ reduction of the pyridine group, this brush micelles may be directly modifying the surface of gold nanoparticles, or reduced in situ to give silver nanoparticles. such \”active self-assembled\” construction provides a novel way for the organic / inorganic hybrid material, to obtain a modified gold nanoparticle micellar brush have good catalytic properties, and the silver nanoparticles can be modified micelles related antibacterial brush application.

Professor Ian Manners is a world famous inorganic, polymer chemists and materials, now the University of Bristol (University of Bristol), Professor, Department of Chemistry, the Canadian Academy of Sciences Fellow (Fellow to the Royal Society of Canada, FRSC) and the British Academy (Fellow of the Royal Society of London, FRS), while for the EU Marie Curie Chair Professor (Marie Curie Chair). Block copolymers proposed in recent years, Professor Manners crystal drive \”activity\” is the self-assembly of polymer science a new international hot research. Professor Manners in this area has greatly expanded the theoretical basis of the field of polymer self-assembly, research work has been published in many high-level academic journals. Professor Ian Manners has so far published over 630 (H-index = \”86, he cited more than 21,000 times), including Science (7 Pian), Nature\” sub-Journal (17), JACS (> 90 articles), Angew (> 50 papers) and so on. 11 patents, authored four professional books, published more than 500 invited and the General Assembly. 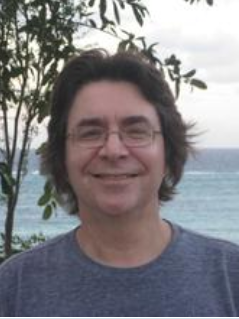 下一个：Is perovskite! Gangster pinch frame, one to one to three \”Science\”