Airgel nanofibers: the next generation of the high efficiency filter

It is well known, since the nanofiber membrane having a small pore size and high specific surface area, particles having a good filtration performance, as many anti-haze artifact is a filter layer. However, after a period of use of such nano-fiber membrane inevitably be greater pressure drop. Some scientists plurality nanofiber films laminated together to prepare a 3D filter media, a higher filtering efficiency is obtained, however, it remains over time growth, filtration efficiency and pressure drop is reduced. Recently, researchers from Zurich University of Applied Sciences and other institutions published the results of a study, they used electrospinning nanofibers prepared and used to prepare nanofibers become Aerogels , and can be effective control the porosity and microstructure, as a filter which was found to have high filtration efficiency, and does not significantly reduce the filtration efficiency at a high filtration rate. According to the research paper, such a 3D nano-fiber manufacturing process airgel as follows: First, nano-fiber membrane was prepared. Composite prepared Pul / PVA composite nanofibers by 4g Pul 90g and 6g PVA was dissolved in water. Electrospinning machine solution electrospinning. Nanofibers are spun nanofiber membrane and the cylindrical electrode of the high voltage 80kV 16cm collector. In the electrospinning process, the temperature and humidity were 26 ± 3 ° C and 26 ± 4% RH. The final diameter is obtained of 240 ± 55nm uniform nanofibers. Main Step 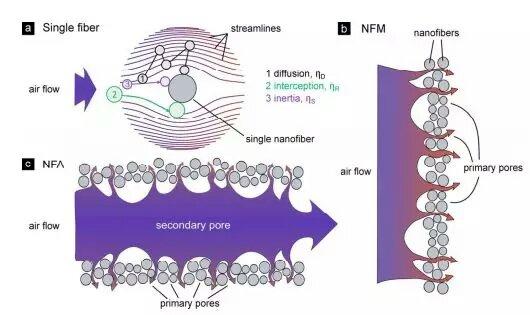 Filter Mechanism schematic researchers different filtration media proposed by researchers studied the filtration performance characteristics and mechanism of different filters, they consider different mechanisms of different filter media, for the individual nanofibers mainly diffusion, interception, prejudice to particulate capture, and the expansion speed calculation nanofiber membrane filter particles is very short, will soon form a filter cake pores in the primary particles at high load. Filter the nanofiber airgel unlike rods, which was a big diffusion path through the secondary aperture, showing the form of cross-flow filtration, can effectively reduce the pressure drop and dust holding capacity increased. The researchers further found that, by adjusting the porosity of the nanofiber airgel, can reduce the permeation 1000 times the number of particles. They openings by introducing a layered structure nanofiber airgel, the diffusion velocity of the particle is no longer a limiting factor in the efficiency filters, can be stably operated at high face velocity, face velocity increased to 6cm / s when, still maintained at a high filtration efficiency factor range of 10. Airgel scene for filtering is not new, but these scientists from Europe for its comprehensive study of filtering mechanism is commendable, and the team won the nanofiber airgel has commercial application-level filtering performance, is expected to advance its widely used in the industrial field, called the next generation of high-performance filters.