Biological regulating the nervous system of the electronics used in the treatment of treatment of neurological diseases more widely, however, the current rapid growth of implantable electronic component can not meet a fixed size and may damage tissue development. For infants, children and adolescents, once implanted devices can not meet the needs of neural development, generally require additional surgery to replace the equipment, resulting in the occurrence of repeated interventions and complications. Despite the restrictions, such as vagus nerve stimulation and deep brain stimulators like bio-electronic device is in active laboratory and clinical for the treatment of various diseases, but their use in the growth of the organization by its fixed shape. Although a lot of studies of nerve stretch apparatus has shown its good biocompatibility and seamless interaction with the peripheral nervous system and the central nervous system, but even if the elastic electronic device adaptable to a biological organ and repetitive strain caused by the dynamic changes in body movement, but to adapt to growth and development organization in the case of the adaptation process does not require substantial pressure remains a challenge. For example, for certain drug-resistant epilepsy (epilepsy accounts for 30% of the total population), which can effectively reduce implantable fans seizures vagus nerve stimulator in children (<12岁）中经常被禁止使用。对于这项挑战，斯坦福大学鲍哲南教授和Paul M. George教授等人 solved this by studying biological deformable electronic components a limitation, deformable electronic devices with minimal mechanical constraints adapted to grow in vivo nerve tissue. relevant outcomes to \”Morphing electronics enable neuromodulation in growing tissue\” in the title, published in the top international biomedical journals Nature Biotechnology [ 123] 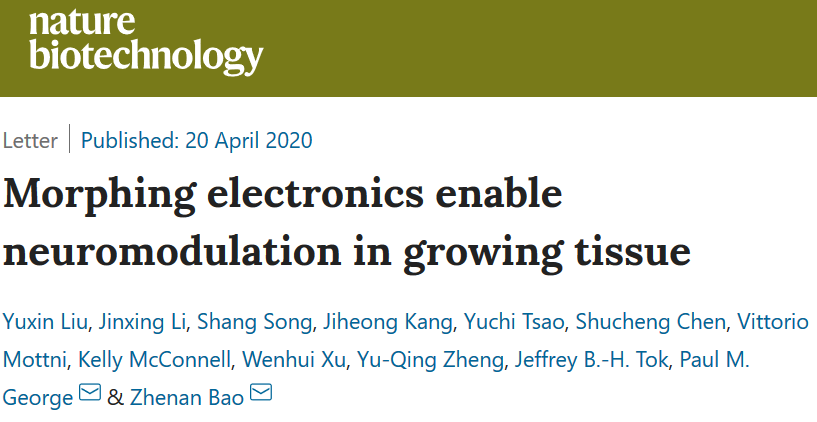 in this work it was designed morphE (Morphing Electronics) and fast-growing rats implanted on the sciatic nerve (Fig. 1a, b). morphE key viscoplastic material comprises a conductive polymer and an insulating self-adhesive and plastic polymer (VP) repair. biocompatible destructurized be used to introduce glycerol and adjust the mechanical properties while maintaining the conductive polymer poly (3,4-ethylene dioxythiophene) polystyrene sulfonate. (PEDOT: PSS) high conductivity when stretchedWhen the 100% strain, PEDOT: resistance PSS / glycerol conductor only increased 3.9-fold (Fig. 1c). In contrast, in the case where glycerin is not added, PEDOT: PSS in resistance at 8% uniaxial strain increases more than 30 times. To achieve the desired self-healing and viscoplastic characteristics, by adjusting isophorone diurea (isophorone bisurea) unit and a strong hydrogen bonding between 4,4\’-methylene-bis (phenyl urea) (an MPU) of the ratio of the polydimethylsiloxane (PDMS) -IU blended with a PDMS-IU0.6-MPU0.4. PEDOT: PSS / glycerol / VP above exhibits typical viscoelastic behavior at 5% strain rate s-1, and the display below zero stress strain rate of 0.05% s-1, indicating that the sciatic nerve is not in mechanical constraints of normal growth (~2 × 10-5% × s-1; FIG. 1d).

2, a self-adhesive for soft and compliant connector morphe neural interface

self-repair mechanism surgery using an implantable flexible electronic particularly advantageous, because it allows in situ to reconfigure the device and re-shaping during implantation, so that a neuromorphic about without any prior information and size can be fully customized installation. In conventional implantation procedures, peripheral nerve cuff slid through the slot (Fig. 2a). Stress at the interface between the relatively large Young\’s modulus mismatch rigid and soft nerve cuff electrode (platinum and elastic silicone rubber) may affect nerve function. The study used self-healing component has developed a biomechanical compatibility, seamless, implantable program individually reconfigured so that remains stable and tight interface between tissue samples MorphE and the sciatic nerve. First, thin film devices placed gently on the bottom of the sciatic nerve (FIG. 2B), tweezers wrapped around the nerve, and then connected to the other side, to form a soft shell. The ability to self-repair the physiological environment due to the hydrophobic PDMS-IU in PDMS backbone. It will be observed MorphE repeated pulling means does not cause a visible delamination or dislocation after sciatic nerve MorphE assembly, which constitutes a durable show MorphE neural interface able to withstand the physiological movement (FIG. 2c). scanningElectron microscopy (SEM) confirmed the neural interface apparatus (FIG. 2d) strain cycle in vivo after 4 weeks seamless. In phosphate buffered saline (PBS), only 1 minute from the recovery at 37 ° C, bound sample 5% s-1 is subjected to a strain rate 858% strain (FIG. 2e).

In order to determine whether and how it affects adult rats MorphE, paper next investigated gait adolescence adult rats, behavioral changes, structural damage and immune responses. Rats implanted MorphE exhibit normal gait, the position of the sole was observed when the normal walking and the toes to spread (Figure 3a). But the rats implanted cuff electrode of abnormal foot function, the entire foot on the ground and dragging the toes, which is a typical symptom of severe sciatic nerve dysfunction. On objective measurement sciatic nerve injury, and carried out a series of sensory and motor tests. Rats implanted with cuff electrodes exhibited severe perceptual dysfunction compared to rats implanted MorphE of high temperature exhibit normal hurt feelings. Further tests showed that a series of motion implanted rats MorphE retain the natural movement function, the cuff electrode implanted rats is permanently reduced motion response (Figure 3b). 8 weeks after implantation, the normal posture of extensor thrust force display electrode cuff decreased 51.5%, and 5.5% MorphE changed only. Next, the reconstruction of three-dimensional micro-computed tomography ([mu] CT) display, and the sciatic nerve morphe seamlessly and consistently intersect (FIG. 3c). In contrast, the inner diameter was observed over the sciatic nerve cuff electrode has a length, resulting in structural deformation of the peripheral nerve. Masson\’s trichrome staining test further indicates that the cuff electrode implanted rats mangled nerves, resulting in decomposition of the epineurium, size reduction and increase in the number of vascular bundles. These results indicate that, contrary to the original crush injury, separated by the implant and \”chronic Compression\” mechanical stresses likely to be caused by the underlying mechanism. Gait, behavior, structure and histological results together prove MorphE can properly adapt nerve growth, and minimal negative impact on adult rats.

1, and herein the design and manufacture of implantable biological multilayer electronic device may be deformable, which device consists of an electrode and a viscoplastic strain sensors, electronic devices can be eliminated stress at the interface between the growth of tissue. Electronic manipulation implant surgery deformable biological electronics to the ability to repair and can realize seamless reconfigurable neural interface. 2, during the fastest growing rats, deformable biological damage electronics on the nerve caused by small diameter increased by 2.4 times, and allow long-term monitoring of electrical stimulation and 2 months without disrupting the functional behavior. Research deformable bio-electronic implant device is used in the treatment of pediatric neurological disease research and development of electronic components offer provides a new way of thinking.