Belittle the work of others, made a \”Science\” is hate! After writing articles to be careful!

I believe that most researchers engaged in related research materials at the time of writing SCI papers, developed in order to explain their reasons for preparing this material, or the like material shortcomings in the Introduction section briefly describes previous work in the paper (such as preparation of poor performance or high cost method), and then put forward their ideas and novel design with \”excellent\” results and \”poor\” the consequence of their products as opposed to the result, which reflects the importance of their own research. But recently, this routine to the wording and published in Science, a research paper to get into trouble! Beijing 2020 May 15, \”Science\” published an online article entitled \”Dry reforming of methane by stable Ni-Mo nanocatalysts on single-crystalline MgO\” research paper, first author and corresponding author of Youngdong Song Cafer T. Yavuz (later referred to as Y & S) are from the Korea advanced Institute of Science and technology. The main contents of this article is based on the previous Ni / MgO catalyst on the nano we developed a new process, a Mo-Ni / MgO composite nano catalyst prepared by the process of Mo doped, for dry Methane method reforming reaction (dry reforming of methane, DRM). Wherein, the DRM refers to the reaction of both CH4 and CO2 greenhouse gas into an organic solvent or the reaction can be used as a fuel, thereby reducing environmental pollution, specific chemical reactions shown in Fig.

Y & S in this \”Science\”, he said own design Mo-Ni / MgO catalyst can solve the long reaction DRM two important problems faced when time of the catalyst: (1) carbon deposition (coking); (2) Since the agglomeration of the metal nano results in reduced specific surface area (Sintering) ( these two issues will lead to failure of the catalyst). At the same time, also has excellent stability and catalytic efficiency: at a temperature of 800 deg.] C conditionsAfter the continuous catalytic reaction of DRM 850 h, CH4 conversion efficiency was 98%, CO2 conversion efficiency of 100%. [time-tested routine of writing, attracted big trouble! ] It would have been gratifying when a study, but the Introduction section in the article, possibly to the importance of preparation containing Mo Mo-Ni elements / MgO catalyst proposed, Y & S wrote a \”Dry reforming catalysts are no exception, and although nickel on magnesium oxide (Ni / MgO) was identified long ago as a suitable non-noble catalyst, rapid coke formation and sintering have prevented its implementation at an industrial scale ……. In order to develop an efficient ……, We …… \”, which roughly means that there is coking and sintering the two major issues previously reported Ni / MgO catalyst dry reforming catalyst based on, affecting its application in industrialization, it was proposed preparation Mo- the idea Ni / MgO catalysts. This article came out, immediately attracted the Michigan Technological University Yun Hang Hu and Eli Ruckenstein et al (hereafter called H & R) dissatisfaction, because in 1995, H & R In: published an article entitled the \”Applied Catalysis A General\” Journal \”Carbon dioxide reforming of methane over nickel / alkaline earth metal oxide catalysts\”, they do is prepared an Ni / MgO (1995 is the original write NiO / MgO, hydrogenatedAfter becomes Ni / MgO) DRM catalyst to catalyze the reaction, and no coking and sintering these two major problems, such as said Y & S in \”Science\” herein. Thus, Y & S of \”Science\” was published out the day, H & R, et al flew in the \”Science\” wrote an article entitled \”Comment on\” Dry reforming of methane by stable Ni-Mo nanocatalysts on single-crystalline MgO \” \”comments and questions to refute studies of Y & S. 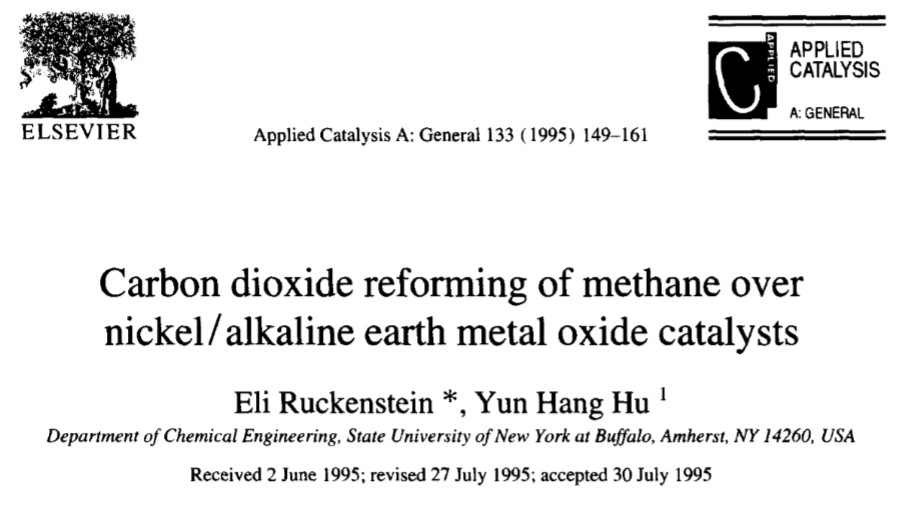 H & R in this opening to write comments: \”the Ni / MgO solid-solution catalysts have been widely investigated and recognized as among the most efficient catalysts to inhibit coke formation and sintering for the process \”. Means that the Ni / MgO catalyst to avoid coking and sintering these two issues, you actually dare to say \”rapid coke formation and sintering have prevented its [Ni / MgO] implementation at an industrial scale\” in the text! This is not consistent with the fact that serious! Then, H & R began to look for Y & S published in Science this study \”stubble\” the. First, H & R that Mo-Ni / MgO catalyst is not Y & S claims as high catalytic efficiency, because in the experiment, Y & S with the CH4 / CO2 / He (1: 1: 8) composite gas instead of CH4 / CO2 gas. After recalculation of H & R, Mo-Ni / MgO catalyst conversion efficiency should be real 75% (CH4) and 80% (CO2), instead of 98% and 100%, while the efficiency is still required to achieve activation time 200h, which is obviously a great influence on the practical application will (Such a long induction time for the Mo-doped Ni / MgO catalyst would seem to present an issue for its application). And Ni / MgO catalyst H & R prepared in 1995, the conversion efficiency of CH4 and CO2, respectively, can reach 91% and 98%, and does not require any activation time, which is significantly better than the Y & S reported Mo-Ni / MgO catalyst ( ni / MgO and Mo-ni / MgO catalyst type actual performance comparison of the results shown in table 1).

In this last comment, H & R Y & S believes ignores many facts in the study exaggerated the novelty and importance of Mo-Ni / MgO catalysts. However, at the same time he refuted and questioned the work of Y & S, H & R also carefully analyzed the causes of Y & S work these problems, and gives some professional advice. [Detractors self \”salvation\”? ] To see the results of their research is hate, Y & S which sit live, flew again on \”Science\” wrote an article entitled \”Response to Comment on\” Dry reforming of methane by stable Ni-Mo nanocatalysts on single-crystalline MgO \”\” article to respond to comments H & R\’s.

In this response herein, Y & S opening on wrote: \”As stated in our paper, the use of Ni for dry reforming goes back to 1928 and Ni / MgO dates to ~ 1974, not what was claimed by Hu and Ruckenstein . \” We do not mean to say that you prepared in Ni 1995 / MgO catalyst is not good, and say that the Ni / MgO catalyst in 1974 reported in the literature (but small series to find a moment in the Science study literature Y & S\’s, and there is no reference to the 1974 document, the fact is quoted in 2004 and 2014 the article, however, does not H & R research literature). However, the face of \”Mo-Ni own preparation / MgO (2020) and 25 years ago the advent of Ni / MgO (1995), which in the end catalyze better?\” This question, Y & S is not directly in response to the text answer, but that the total number of catalytic performance and reactant conversion and other related conditions, but also the durability of suitable catalysts investigated. After the Mo-Ni / MgO own prepared at 800 ℃ continuous catalytic 850h, 1g can be catalyzed L 10110 starting materials and reaction conversion, coking 35 days while using this problem did not appear. And after a lot of Ni / MgO catalyst used for some time in the industry will be significantly inactivated. H & R with a facing of activated 200h up to this challenge the Mo-Ni / MgO, Y & S was 7:00 in the responses detailed herein set forth. In those described in, Y & S published work on \”Science\” is carried out its own more detailed analysis and explanation of his own designed a large number of control experiments in the study, the results showed Mo-Ni / MgO ratio Ni / MgO It has better catalytic performance, and the mechanism of evolution of the process conducted in-depth inquiry.

[summary] By paper \”demeaning\” others work to set off their own good work, this really appropriate? In small series, each published study has come out of its great value, and it is based on previous studies with a large number of descendants to avoid the study of many pits, and then find a shortcut on developing and producing better products; for example in the incident, Mo-Ni / MgO catalyst was prepared by changing out the process and the component based on Ni / MgO catalyst on. So, writing papers need to be cautious, if not all-round understanding of other people\’s work, Do not easily work on someone else\’s qualitative and conclusions. Another aspect, though this event is not over, but this \”fight\” the result of a bout, both sides in the dispute at the same time, but also on the other side and their job was to think deeper. It was with these disputes and thinking, scientific research in order to move forward in the spiral continues to harvest truth, promote the progress of human society. Original link: