Beyond the natural! Preparation of highly complex artificial nanostructures made important progress

April 9, the research group of Professor Zhou Yongfeng Department of Chemistry, Shanghai Jiao Tong University doctoral Jiang Wenfeng collaboration with Prof. Nicholas A. Kotov University of Michigan et al , in top academic journals \” Science \”on the\” \”form published an article entitled\” First Release Emergence of complexity in hierarchically organized chiral particles \”of the latest research results. Work was supported by the University of Michigan, Center for Science in the forefront of Chemistry and Chemical Engineering and transformative molecular Shanghai Jiaotong University, as well as the strong support of CSC.

size polydisperse nanoparticles self-assembly process, due to thermodynamic reasons, tend to aggregate or bulk morphology assembly simply formed. How to overcome the energy barrier, these nanoparticles form a multi-level complex and orderly structure? On the basis of their gold – cysteine ​​(Au-Cys) successfully synthesized chiral material particles having a highly complex structure, and reveals the mechanism of formation of complex structures. Found, Au, and Cys generated nanosheet under action of the surfactant CTAB, avoiding the formation of aggregates bulk assembling a random path, forming a complex multistage orderly particles. When the cysteine ​​is involved in the reaction of enantiomerically pure L- or D- form, the particles of stone pieces form a class structure algae (CLIPS); and when a racemic cysteine ​​participating in the reaction, forming a kayak like particle (KPs). Further structural analysis, CLIP particles containing two distinct chiral structure: a first stage from a chiral twisted structure nanoribbons; Chiral second stage from the coil arrangement between the belt and the surrounding nano nanoribbons . KP particles are also multiple levels of structure, but there is no chirality. Nucleation temperature 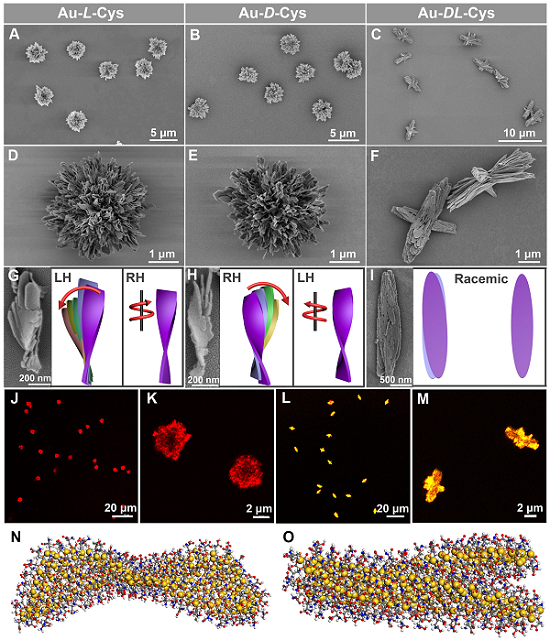 t The enantiomeric excess χ by modulating ligand of Cys, and changing the assembly when the initial n , the authors preparing a series of colloidal particles of different structures, and thus drawn χ- t n FIG dimensional phase morphology. These rich phase region of the phase diagram comprising, Provided material for further study of the mechanism of the assembly. The results show that, when the equivalent electrostatic confinement material is quite elastic restraint when proximity coupling assembly electrostatic repulsion force between the substrate sheet surface with the nano-membered nanosheet contribution of ΔG, assembling nanoparticle assembly no longer depends on the size of the primitive , and more dependent on their chirality / asymmetric shapes. The key complex synthesis of ordered structures, the assembly process is not dominated by a certain kind of force. Competition between the various roles, constraints, assembly structure so that strike a balance between these effects, which appeared in complex multi-level changes. By the establishment and development of mathematical graph theory algorithm complexity factor (CI) of the structure of FIG nanomaterials abstracted CI value is then calculated, enabling quantitative comparison of structures of varying complexity. The results show that the morphology of these Au-Cys colloidal particles at high values ​​of the most complex [chi] (χ → ± 100%), and the complexity of the structure beyond the complex occurs in nature, such as coccolith housing.

Finally, these complex structures colloidal particles exhibit special optical properties, such as light emitting chirality. The difference is that previously reported, the CLIP chiral particle emission, not only with its electronic excited states of polarization, but also on their associated geometries. This is due to the geometry of the chiral CLIP colloidal particles had a pair of left and right-handed light scattering asymmetry. Further, Au-Cys these materials have good chemical properties can be designed and adjustability.