A hydrogel is a physically or chemically crosslinked polymer network water-swellable synthetic soft material. Because of its excellent biocompatible / biodegradable, similar to natural tissue and organs of the mechanical properties and environmental responsiveness, hydrogels have been widely used in biomedical applications, including drug delivery, biosensors, tissue engineering synthesis of regenerative medicine and extracellular matrix (ECM). Recently, many biological molecules, including proteins, peptides, DNA and RNA are used as synthetic hydrogel structural unit. Protein Hydrogel its biochemical and mechanical properties can be designed and adjusted while much attention. . Nanjing University of Cao Yi team in the ACS Macro Lett published on the \”100th Anniversary of Macromolecular Science Viewpoint: Synthetic Protein Hydrogels\” to polymer science point of view latest developments synthetic protein hydrogel reviewed.

can be obtained from natural protein synthesis to protein from the native protein in nature, has been widely used in the hydrogel. For example, a mixture of proteins Matrigel various structures (including laminin, collagen and proteoglycans); hydrogel other natural proteins from a single protein components (including elastin, collagen, gelatin, collagen (denatured portion protein), silk proteins and globular proteins). In addition to natural sources, a protein can also be obtained by recombinant DNA techniques and solid-phase peptide synthesis methods. Protein hydrogels can be made entirely of synthetic proteins may also be made of the hybrid network of proteins and other polymers. Hydrogel advantages protein synthesis step is simple, relatively more uniform network structure. Compared with chemical synthesis, or naturally derived polymers, recombinant proteins are generally more expensive. Whole proteins and hybrid proteins hydrogel may be a physical gel or a dynamically stable chemical gel. The hydrogel network, the protein may act as both crosslinking agent, may also act as load modules.

Compared with other polymers, proteins characteristic of many proteins have multiple functions hydrogel. eggWhite matter is a polymer having a well-defined sequence, chemical properties (density and the amount of crosslinking biologically active ligand) on its molecular level is well controlled. Second, the unique secondary and tertiary structure of the protein sequence encoding it have a different mechanical properties. Further, the nature provides a wealth of protein member is a hydrogel. They may be derived from a structural protein mechanical properties, it may be no mechanical function of a protein in vivo. Most proteins have biocompatibility for biomedical applications.

Mechanical properties of the hydrogel is to regulate cell proliferation, differentiation and proliferation of important physiological signal. Cells can sense and respond to a variety of complex mechanical properties of the hydrogel, including flexibility, toughness, strain softening / stiffness and stress relaxation. These proteins may be native protein biological environment with a clear mechanical function, or may be a protein having no mechanical function (FIG. 1).

elastin resilin and random coil structure, and entropy spring acts in vivo. Their elasticity and ductility associated with the tissue, these proteins may be synthesized using recombinant DNA techniques. Stretching and relaxation curves of these proteins is reversible, without hysteresis. Elastin is generally highly water soluble, it may be chemically crosslinked to form a hydrogel. Soluble elastin and solubility depending on their sequence. Many natural fibrous elastin, but the fibrous structure of the protein synthesis is very limited. Compared with intrinsic disordered proteins and fibrous proteins, globular protein is more abundant in nature, is a major component of natural extracellular matrix. They may expand by mechanical force, thereby providing extensibility and toughness of the material. The various globular proteins can be designed to combine the mechanical properties (including elasticity, toughness, ductility, and self-healing properties) can be regulated protein hydrogel. By adjusting the crosslinking agent and the mechanical properties of the carrier module can be semi-quantitatively predicted engineered hydrogel mechanical properties.

in the hydrogel, cross-linked monovalent permanent co provide the desired mechanical rigidity to the hydrogel, and provides physical crosslinking and dynamic response characteristics of the hydrogel (FIG. 2A). idealThe crosslinking method is specific, fast, high yield. Typically these crosslinking methods based on protein tyrosine, cysteine ​​and lysine (FIG. 2B). The method of crosslinking includes a light catalysis, enzymatic catalysis, oxidative disulfide bond is formed, mercapto Michael addition with electron deficient carbon – carbon double bond in the reaction – carbon double bond or alkylene radical mercapto electron-deficient carbon. These reactions and used to design proteins – hybrid hydrogel polymers. The hydrogel may also be engineered (Figure 2C) using a number of enzyme-catalyzed reaction. Ligase commonly used include sortase, crack intestinal peptide, crotonaldehyde, vinyl phosphate acyltransferase pan and asparaginyl endopeptidase group. They may be connected to a specific peptide sequence or a peptide ligand to form a covalent bond. The specific enzymatic reactions and orthogonality. When different enzymes are combined, they can be used to project complex hydrogel structure. Enzyme concentration and activity may be controlled gelation kinetics, provide a way to control the gelation kinetics. Other proteins capable of changing the hydrophobic or conformational enzyme may be used to initiate gelling protein hydrogels, such as a gene encoding a click chemistry (FIG. 2D).

The hydrogel may also be based on protein – interaction physical crosslinking ligand – protein or protein. It is estimated that the presence of proteins in the human interaction ~650 000 body – protein interactions. However, the interaction can be used to crosslink the protein corresponding to the hydrogel meet the following requirements:

The hydrogel should have good self-healing properties and injection properties. However, if the interaction is too dynamic, hydrogels tend to be unstable.

A number of proteins in the body responsible for signal conversion and energy transduction, these functions are often dynamic conformational change of the protein is achieved. This unique property may direct the protein to the hydrogel to obtain a stimulus responsive. Binding protein hydrogel may induce conformational changes of proteins in response to different chemicals by ligand. Protein hydrogel by heat and chemical denaturant-induced protein folding / unfolding in response to external stimuli, but will destroy the chemical stability of the protein denaturant, and even lead to protein folding, greatly reduces the mechanical strength of the hydrogel; temperature also has the disadvantage of irreversible thermal denaturation and aggregation of a protein, although designed to be used to produce robust protein it was hydrogels. salt ions and pH responsive hydrogel can be engineered based on peptides and proteins folding / unfolding. Light-responsive protein hydrogels have special significance, they may be non-invasive, reversible control sol – gel transition and adjust the mechanical properties in the spatial and temporal scales, many light-responsive protein has been designed to respond to a hydrogel (FIG. 4). Light-responsive protein hydrogels can be engineered by three different methods:

has also been extensively studied other responsive hydrogel. The enzyme reaction may be used in pharmaceutical hydrogel controlled release and cell culture.

The hydrogel mechanical properties and the stability of its network directly to the structure, the hydrogel network decides how the external force is transmitted to a single protein. Although most synthetic protein is a linear polymer, but still much room for change in network configuration (FIG. 5). Protein and protein – protein complex mechanical stability is largely dependent on the direction of pull. Protein in the hydrogel is usually a protein from both ends to tensile forces, but some crosslinkingSynthetic hydrogels random network stretching direction is not clear. Using protein engineering technology can force a clear direction on the protein, which is particularly important for physically crosslinked hydrogel. Dobby crosslinking agent may be introduced into a protein hydrogel having the desired construct a network structure. A protein hydrogel new network topology due to the precise sequence close to the ideal network topology. Thus, protein hydrogel Dobby smaller defects, greater mechanical stability. 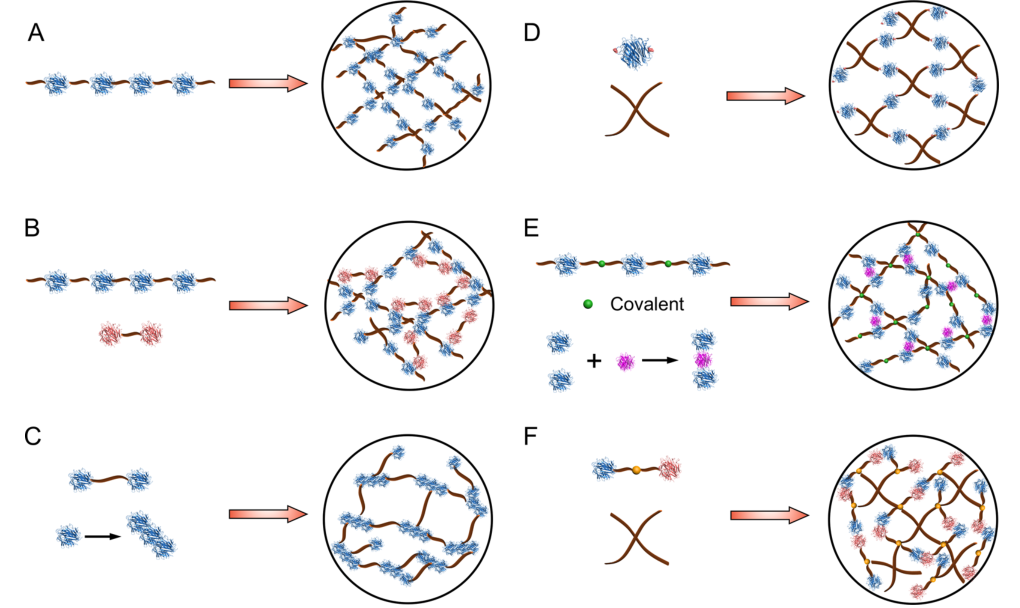 Many properties of the protein hydrogel soft material makes it ideal for biomedical applications. First, they can be constructed based on the use of extracellular matrix proteins, and thus has a high cell compatibility, for a variety of cell culture and in vivo applications. The hydrogel physical / chemical properties are also important for other biological applications. For example, in three-dimensional cell culture, the sol – gel transition speed should be very fast to avoid wrapping process in the cell pellet; mechanical properties of protein hydrogels can serve as a control cell self-renewal, proliferation, migration and differentiation of stem cells new means; when used in synthetic protein hydrogel transfer proteins and cells, and shear thinning properties of the injectable self-healing therapeutic agent is essential.

Although protein synthesis in the field of soft hydrogel biomaterials has made great progress, but there are still many engineering challenges. First, the stability and yield of engagement is difficult to increase protein synthesis, cost reduction difficult. Next, still difficult to replicate natural tissue anisotropic structures with well aligned fibers. System Third, the need for the rational design of the mechanical properties of the protein hydrogel. Fourth, once the cells are cultured in a protein hydrogel, the integrated system will have a synergistic mechanical properties. In addition, the dynamic response of the cell culture process would change the mechanical properties of protein hydrogels. Finally, while most proteins directly from the natural human protein, but its biocompatibility should be studied further. Based on the rapid expansion of the unique characteristics of the protein hydrogel and the field of study, the authors believe that the protein hydrogel in the future a wider range of biomedical applications. Some mature protein hydrogel material can be used as a standard laboratory cell cultures, and even can be used as medicine and clinical application of new biological material for commercial.