Carbon nanotubes (CNT) have a one-dimensional structural properties since the early 1990s and was first reported in the preparation of nanomaterials out has been a world star material, after nearly 30 years of development and research currently exhibited in many areas great potential. Meanwhile, with the progress and development of cutting-edge technology of high, industrial production of high density, high performance and energy efficiency requirements of field-effect transistors (FETs) are increasingly urgent. However, currently based on the use of metal – oxide semiconductor field effect transistor (MOS) FETs is difficult to adapt to future miniaturization and higher integration trends in integrated circuit (IC), and therefore a need for the development of new FETs. 2020 May 22, the latest issue of the magazine Science published the research progress of three in a row on CNT FETs in the field! Here, small series lead everyone to see it, to see what a breakthrough that\’s it!

, and the CNT-dimensional structure having an adjustable characteristic of nanoscale dimensions, so long before it was the search for alternative silicon FETs. However, due to the purity of the CNT, the prepared CNT FETs in density and regular arrangement of these problems were not solved, and thus limiting the application of large-scale preparation of the CNT-based FETs. To solve this problem, Peking University research team Peng Lianmao Academy Professor ZhangZhiYong joint research team developed a first preparation method for multiple dispersion and sorting to obtain a high purity for the preparation of CNT FETs; then, the method to limit the size of the automatic alignment 10 cm silicon wafer prepared on the substrate and a good arrangement of adjustable density (number per micrometer arrangement between 100 to 200), the CNT array. Under the same conditions the gate length, the CNT FETs aligned based on this preparation exhibits more excellent performance than the commercial silicon FETs – conditions at a voltage of 1V, on-state current reaches 1.3 mA · um-1, transconductance of a record of 0.9 mS · um-1. Meanwhile, when using an ionic liquid as the swing gate can hold a lower temperature threshold (<90mV / decade). In addition, mass production of a top gate five ring oscillator shows the highest maximum oscillation frequency may be greater than 8 GHz. Accordingly, based on such a field effect transistor in the CNT array exhibit a future microelectronics great potential. This research intoIf the order entitled \"Aligned, high-density semiconducting carbon nanotube arrays for high-performance electronics\" published in \"Science\". 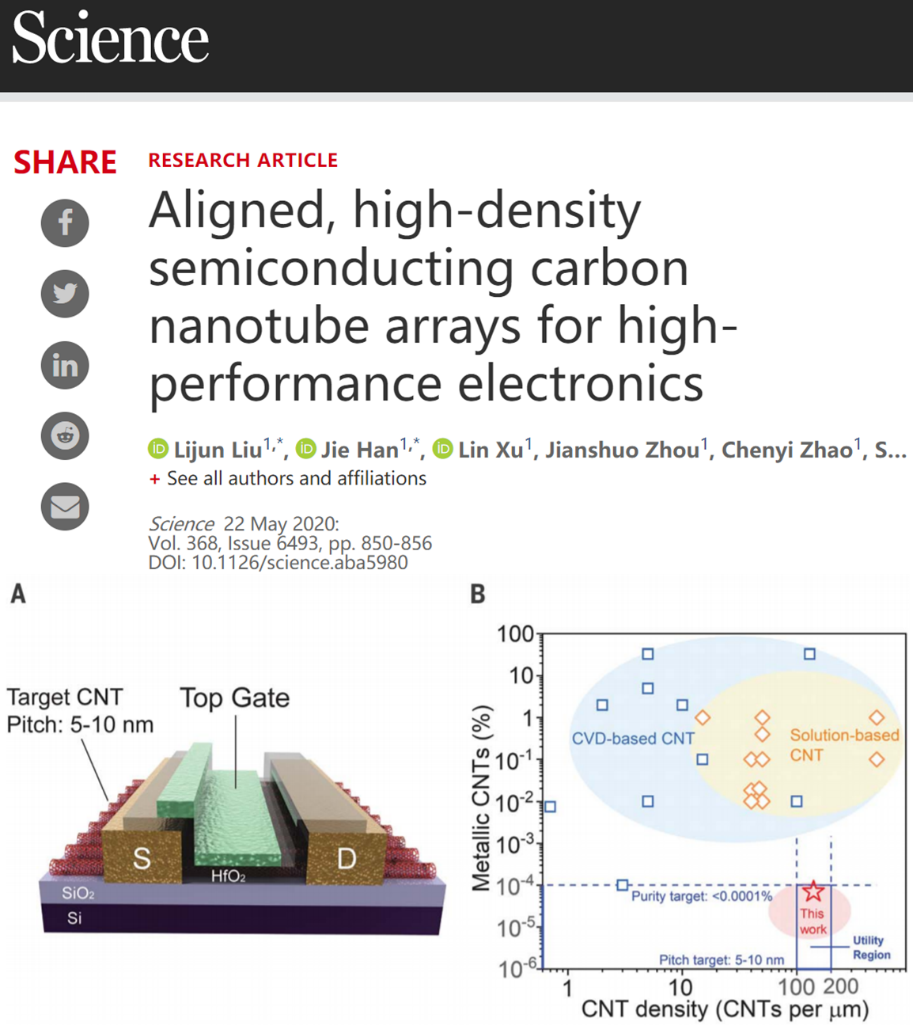 As previously said, the difficulty of preparing CNT-based field effect transistor is characterized by a high density CNT array and high degree of regularity. To solve this problem, Yin Peng Harvard University and Harvard Medical School\’s (graduated from Peking University), Professor Wei Sun research team developed a method to prepare supramolecular assembly of high density and high regularity CNT arrays. Specifically, researchers first self-assembly effect of single-stranded DNA constructs a regular array structure having a trench, followed by the surface of the CNT, \”modified specificity\”, make the design of CNT can be modified prior to accurately lay into the good grooves, can be obtained spacing of less than 10.4 nm, the deviation angle is less than 2 °, the assembling efficiency greater than 95% of the CNT array. The study, entitled \”Precise pitch-scaling of carbon nanotube arrays within three-dimensional DNA nanotrenches\” published in \”Science\”.

Compared with current photolithography using the semiconductor nano-arrays prepared using Method bioprocessing exhibits a smaller channel spacing. However, the biological lattice metal ions and characteristics of submicron size reduction and resulted in poor uniformity of the difference in transmission performance large area array. To solve this problem, Peking University Professor Sun Wei and HaGate University professor Zhu research team prepared an array of parallel CNT DNA template method as a model system, developed a first fixed after washing (rinsing-after-fixing) method will increase the transmission based on key performance indicators effect transistor CNT array 10 times or more (compared with the previous biological templates field effect transistor). In the study, use of space is limited, it is assembled in the cavity PMMA centimeter of the CNT array. In the high-performance electronic and biological molecules self-assembled interface, this method allows the production of biological templates retractable electronics possible. The study, entitled \”DNA-directed nanofabrication of high-performance carbon nanotube field-effect transistors\” published in \”Science\”.