Cooling the coating to a radiation spot colors

Cooling buildings, vehicles and other ground objects and data centers are the key challenges we face today. Cooling typically requires a lot of energy, because a lot of power consumed based on a compressor cooler. Using the reflection of sunlight and heat radiation surface sustainable way of cooling an object in the sun. However, these white or silver surface can not meet the demand for color. To solve this problem, people of color to study the radiation cooler (CRC). CRC may selectively display the desired portion of the visible spectrum absorbed by a color, and other solar wavelengths, especially in the past to SWIR is reflected. However, the existing CRC or performance range are restricted. Thus, in a highly scalable manner while achieving color and radiation cooling performance remains a challenge. 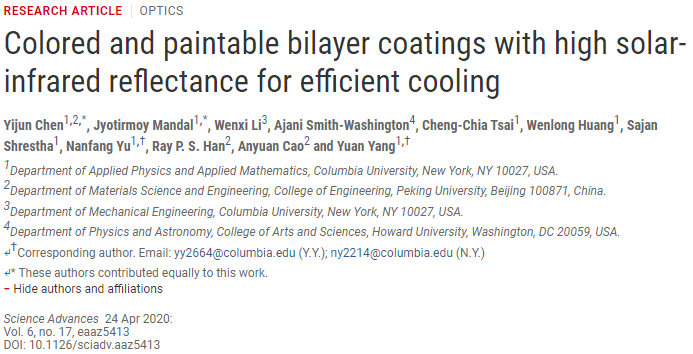 Recently, Columbia University Yang Yuan , Southern Yu in \” Science Advance [ 123] \”describes a two-layer coating of one color and radiative cooling may be achieved simultaneously on. The light scattering layer coating comprises a non-absorbing visible light-absorbing layer and the top layer. Top reflector to maximize the absorption of visible wavelength suitable to display a specific color, and the bottom layer is the near SWIR (NSWIR) light to reduce solar radiation. Accordingly, the temperature of the two-layer coating in strong sunlight low 3.0 ° to 15.6 ° C than the commercial single layer coating of the same color, and can obtain a higher reflectance NSWIR (0.1 to 0.51). These properties indicate that the double layer coating can be designed simple, inexpensive and scalable way to achieve efficient radiative cooling and color.

NSWIR . In addition, a conventional thin top layer having the same color of the target single colorant concentration and composition. Although much thinner than the single layer coating, it still has a sufficient thickness to ensure that the target is strongly absorbed by the complementary color of visible light, while other wavelengths were scattered sunlight itself or the underlying reflector.