Coulomb damping polymer self-assembly, the colloidal crystals may be

Simple Coulomb force to attract the member, generally form a more complex structure, such a structure everywhere, from rock salt particles to the superlattice. However, in the micrometer scale, the water from the colloid and oppositely charged substance forming such crystals is difficult to achieve a simple idea, but the formation of non-equilibrium structures such as gels and clusters. Although various systems have been designed for two yuan crystal growth, but in a natural aqueous environment of the surface charge is difficult to assemble the crystalline material. Recently, New York University Stefano Sacanna by a method other researchers coulomb damping self-assembled polymer (PACS) is called the formation of colloidal crystals ions in water. The key is to use a neutral crystalline polymer, so that the particles maintain a certain distance, it can be adjusted so that an electrical double layer overlap attractive guide particle dispersion, if necessary crystallization or permanently fixed. Using the Debye screening length to fine-tune the assembly proved macroscopic crystal nucleation and growth. And colloidal particles using a variety of commercial polymers, such as selected according to the particle size ratio of cesium chloride, sodium chloride, aluminum diboride and the like K4C60 ion with colloidal crystal structure. Once fixed simply by diluting the salt solution, the crystal will be pulled from the water for further operation, which indicates that the crystal phase can be accurately assembled dissolved transition from a dry solid structure. Unlike other assembly methods, in this method, the particles must be carefully designed in order to bind the encoded information, PACS model can be used to make conventional colloid colloidal ions as a crystalline preparation. The research results entitled \”Ionic solids from common colloids\” papers published in \”Nature\” (see the text description link). 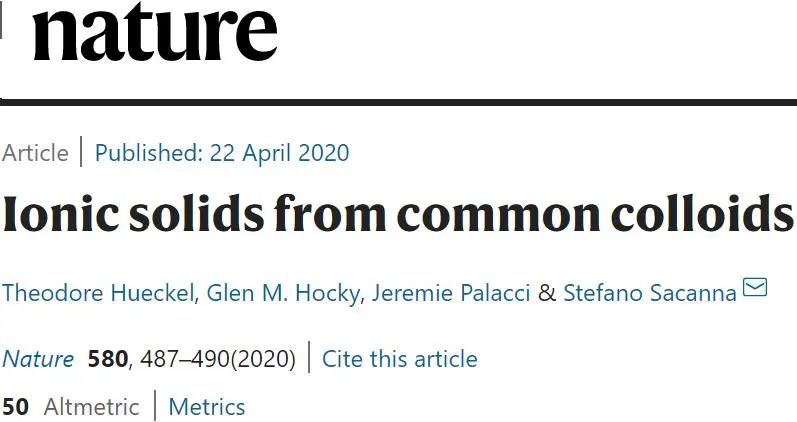 Researchers use root Degas – Landau – Weier Wei – Overton BAK (the DLVO) theory described in during assembly of colloidal crystals ions in water, the theoretical equilibrium space therebetween polymer brushes repulsion electrostatic attraction between oppositely charged particles and clearly defined. Wherein the thickness of the double layer is the Debye screening length λD, gravitational set range. A second weight disposed electric double layer; a first, prevent particles from entering the van der Waals regions: the spacer particles as polymer brushes, which acts bothFold. Particle separation control the amplitude of electrostatic attraction, the force can be effectively formed by λD tunable ionomer. As shown in FIG. 1a, researchers consider the contribution of the repulsive potential VP (dotted line) between the brush to the electrostatic potential overlap between the VE charge bilayer (dashed line) and the polymer. Superimposing both oppositely produce VEP potential (solid line), between the performance of the charged particles with respect to the thickness of the polymer spacer L can be obtained by changing a local minimum λD adjustment. Corresponds to the minimum depth value with the bond between oppositely charged particles energy Eb. When [lambda] d <<L聚合物刷可防止双层重叠，静电相互作用消失，粒子空间稳定；相反的，聚合物刷的存在是微不足道的，双层完全重叠，粒子聚集。此文中，粒子间隔区在静电吸引彼此的同时保持使带相反电荷粒子之间的分离，提供了可重构性的内聚性，这是可靠组装的必要条件。

Researchers factors crystallization experiments were carried out, including the type of spacer particles, solvent conditions and building blocks. Through a series of polyol surfactants, i.e., F108, F127, F68 and F38 to select different thickness of polymer brushes, and the length L decreasing listed. As expected, the particles having a shorter interval require higher salt concentration (i.e., less [lambda] d) the same weight to the self-assembly is now longer interval observed. The researchers found a direct correlation to cause crystallization (FIG. 2a) and positioned between the spacer λD values, thus demonstrating the separation between the oppositely charged particles allows static adjustable assembly. Meanwhile, at different pH values ​​the crystal assembly further tested the robustness of the PACS. Analysis showed that (FIG. 2B), the crystal can be assembled in a wide range of pH conditions, the only limit is determined by the isoelectric point of the particles, beyond these points, will annihilate opposite charges and electrostatic attraction disappears. Finally, the particles of different composition are mixed and matched, PACS proved applicable to almost all water-based colloidal systems. Silica, 3- (silane) propyl methacrylate (TPM) and PS particle size of from 200 nm to 2 μm all were successfully crystallized. In particular, the versatility of the method elucidated sufficiently mixed crystal formation, including solid and liquid components.

In contrast, PACS by the interaction of a convenient, general the self-locking key mechanism established between the particles, completely overcome the traditional self-assembly special needsGiven the shortcomings fixed mechanism. The researchers also found that in the deionization conditions, solid crystals becomes constant, which can be processed and dried in the solution, while maintaining the ordered crystal, and this process is irreversible. By this self-locking mechanism, the observed macroscopic ion colloidal single crystal grown in a solid form, and together with the atoms similar characteristics (FIG. 3). With atomic crystal structure of the ions changes the size composition, ionic structures herein is determined by the ratio of the colloidal crystals (beta]) of the building blocks. When β is located between 0.95 and 0.81, colloidal isostructural cesium chloride (CsCI) nucleated from a (110) plane of composition, rapid formation of a rhombic dodecahedron (FIG. 3 b, f). Lower β (= 0.61) values ​​observed the formation of two aluminum boride (AlB2) crystal structure (FIG. 3 c, g); β = 0.53, the observed phase unique K4C60 (FIG. 3 d, h). Finally, β = 0.47, the formation of a structure of a conventional crystal nucleating sodium chloride (FIG. 3 e).

In addition, researchers also use the second assembly method, i.e., heterogeneous nucleation by the substrate to the charging assembly. , Effectively growing solid was shaped by crystal growth along a particular direction. As shown in FIG. 4a, wherein a plane defined by CsCl negatively charged glass substrate (100), (111) and (110) plane, a planar density of the positive particles is selected in descending order. Thereby obtaining three different types of crystals, and having a characteristic color and shape: the yellow box (100), green hexagon (111) and pink hexagon (110) (FIG. 4b). Certain species due to color evenly the same angular orientation of the scattered light in the crystal. Wherein due to the higher density of the particles is positive, there is more (100) planes nucleation. When increasing the strength of the interaction, the more pronounced influence of the substrate, resulting in (100) plane of the formed pure. In experiments and simulations can be selected by the cone surface of different crystal gravitational self-assembled (FIG. 4c).

In summary, conventional colloidal self-assembly requiredInteraction to be carefully balanced, and any chemical or mechanical disturbance and incompatible requires a specific fixed mechanism, ultimately limits the production and scope. Here, PACS completely avoid this defect. At the same time, PACS self-locking mechanism to make it more widely and versatile. Original link: https: //doi.org/10.1038/s41586-020-2205-0

上一个：What Aerogels are? If there is no light matter, spend tip a \”cloud\”