Crystallization of the polymer bottle brush – breaking the translational symmetry!

The core principle of crystal growth is to meet the constantly repeats itself under the premise of the translational symmetry, and affects the macroscopic symmetry of the crystal lattice symmetry through. However, in the case of restricted internal or external, may be formed in the shape of a class of mismatched crystal symmetry. Causes of different materials to form such a shape does not match the symmetry of the crystal varies, the stress imbalance is considered to be an important reason for the destruction of the symmetry. 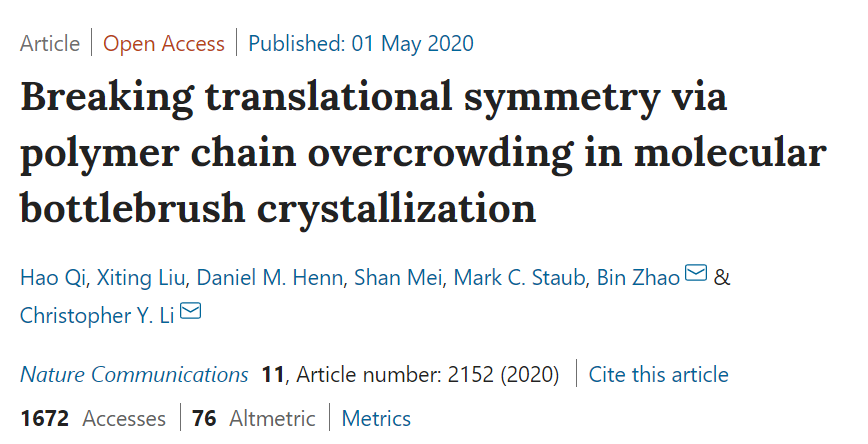 recently Drexel University in the US Chris Li Task Force and the University of Tennessee study Zhao Bin [123 ] cooperation in \”Nature communications\” reported bottle brush polymer crystallization process of spontaneous destruction of translational symmetry, forming a hollow opening controlled crystal ball, which is brushed on the level of a single crystal first reported the crystallization behavior of the polymer. Bottle brush polymer molecular bottlebrush (mBB) refers to the backbone of the graft polymer having a sufficiently high grafting density. This unique molecular structure helps to find many new properties, including precise control of mechanical properties, surface friction controllable, precise self-assembling and the like. The authors found that a linear two-dimensional plane is different from the plate-like crystals of polyethylene oxide (PEO) is formed, the bottle having a side chain grafted PEO brushes polymer mBBn-PEOm-100σ (subscript n and m represent the backbone the degree of polymerization and degree of polymerization of the side chains, [sigma] represents the grafting density, defined as the percentage of the number of side chains grafted to the main chain repeating unit, FIG. 1a) capable of disrupting the translational symmetry, three-dimensional hollow spherical crystals. The authors say this unique crystal structure mBB cyrstalsome (mBBC). MBBC growth method shown in Figure 1b, undergoes dissolution – pre-crystallization – from seed nucleation – four crystallization steps. Selected area electron diffraction (SAED) demonstrated the same mBBC crystalline microstructure of PEO and PEO flat sheet-like crystals, diffraction spots becomes like an arc by a non-planar curved crystal lattice extensor space inevitably caused. Atomic force microscopy (AFM) and scanning electron (SEM) show more intuitive mBBC morphology of hollow spheres. OF different crystal growth time were collected and observed by a scanning electron microscope found that, in the growth process, the constant radius of the sphere, spherical shell area with timeIncreased with stop growing (Fig. 2a-c) after thirty minutes. At this point mBBC spherical shell gaps exist, and can not grow into a complete spherical shell. The concentration of the polymer brush of the bottle increased from 0.01% to 0.02% mass fraction appeared in the rosette-like crystalline morphology (FIG. 2d). After mBBC spherical shell with a gap to the solution was further added a solution of the same mBB, spherical shell gap can be further reduced, but still can not form a closed spherical shell (FIG. 2e). The authors found that the PEO (molecular weight 5000) mBBC is added to the notched straight chain is capable of forming a closed spherical shell (FIG. 2f).

In the graft density greater than 0.48 were observed in the spontaneous formation of a spherical shell morphology destruction translational symmetry of the crystalline behavior. The method and by fluorescence resonance energy transfer is demonstrated that due to the loss of symmetry in the outer side of the crystalline PEO graft, due to the spherical shell. Such Spherical crystal bottle brush based polymer formed to provide a new design is functional nanomaterials. The full text link: https: //www.nature.com/articles/s41467-020-15477-5