Scientists have determined, Dragonfly wings, and the like cicadas insects having antibacterial properties, because having these nano-pillars on the wings of insects upon exposure to the bacteria will die, however, antibacterial principle is not yet nanocolumns -known . 2020 April 2, Nature sub-published Nature Communications published online the from the University of Bristol, UK [ 123] the article entitled: Antibacterial effects of nanopillar surfaces are mediated by cell impedance, penetration and induction of oxidative stress the research paper. In the high resolution scanning microscope, the researchers found, Antibacterial Mechanism dragonfly wings from the envelope surface modification process of the nano-pillars with a penetration of bacteria .

can be sterilized dragonfly wings

In addition to the cicada, dragonfly wings have also been proven effective in bactericidal properties. The researchers found that the wings called Diplacodes bipunctata Australian red dragonfly can kill both Gram-negative bacteria and gram-positive bacteria, nano-columns on its wings will enhance the cell wall stress, or even to deform, thus forming a bactericidal effect.

Note : gram-positive bacteria and Gram-negative bacteria using the Gram staining method to identify the two types of bacteria. Most pyogenic bacteria belong to Gram-positive bacteria, they can produce exotoxin make people sick, and most of the intestinal bacteria are mostly gram-negative bacteria, which produce endotoxins, rely on endotoxin make people sick. In order to ensure antibacterial, doctors will implant surgery these implants immersed antibiotics in advance, however, in view of the cicadas and dragonfly wings has a unique bactericidal properties, scientists want to take advantage of this nature design with antibacterial effect the implant material, so as to effectively solve the problem of bacterial infection on clinical. Titanium dioxide nanoM columns and dragonfly wings

To better understand and verify nanocolumn antibacterial mechanism, the research team electron tomography nano column 3D reconstruction of the sterilization process, and then, by proteomic analysis and understanding of the nano cylindrical surface molecular changes, in addition to quantitative measurement of bacterial viability assay using Staphylococcus aureus viability of E. coli and Klebsiella pneumoniae at the surface of the titanium dioxide nano-pillars. Note: Titanium is used for nano-columns multiple orthopedic implant. After oxidation at 850 ° C 5 minutes, and as shown, the surface of the titanium dioxide nano-topography is very similar to the dragonfly wings. The following figure is a top view of FIG titanium dioxide nano-pillars, b is a perspective view in FIG.

with the permeate envelope modification process

In the high resolution scanning microscope (SEM), researchers observed that the titanium dioxide nano-column Staphylococcus aureus, Escherichia coli and Klebsiella pneumoniae are envelope deformation phenomena occurred, wherein \”envelope modification\” is defined as: nano-columns in a contact manner or pressed to change the surface morphology of the bacterial envelope process. As shown below, the white arrow is the modified envelope region.

Subsequently, researchers using a transmission electron microscope (TEM) found nanocolumn Staphylococcus aureus, Escherichia coli and envelope appeared permeate envelope deformation phenomena, for Klebsiella pneumoniae, nano-pillars 11% cells induced deformation of the envelope, while 8% of the cells permeable. Similarly, the \”permeate envelope\” is defined as the ability to penetrate bacterial envelope nanorods process destroys the barrier between the cytoplasm and the extracellular environment. As shown below, the white arrow is the permeation of the envelope. 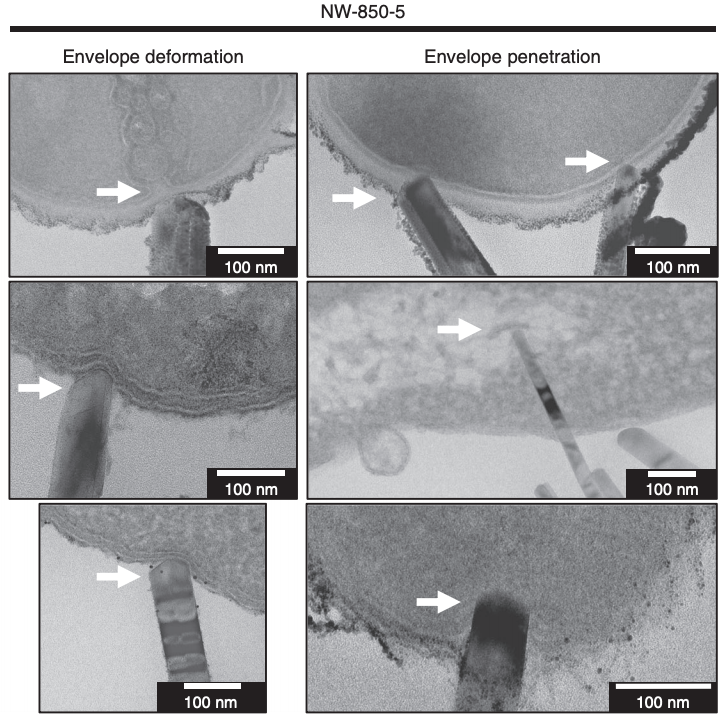 for producing an antimicrobial implant

historical studies suggest that the nano-pillars may be pierced wings bacterial cell surface, leading to mechanical lysis of the cells, so as to achieve an antimicrobial effect. However, this study has proposed a rebuttal, after observation and analysis, the scientists believe that the principle of antibacterial nano-pillars are actually affected by many factors, of which two key processes as cell envelope deformation and penetration, which are accumulated by the physical resistance and oxidative stress induced effects. Finally, the authors noted, \”in the understanding of mechanisms of nano-pillars destroy bacteria, the next step is to design and manufacture this knowledge to have antibacterial properties in clinical nano-implants.\” Papers link: https: //www.nature.com/articles/s41467-020-15471-x