Since the development of organic semiconductor devices and the manufacturing process, organic solar cells have made great progress. However, from small molecules and small molecule receptor donor whole small molecule organic solar cells (SM-OSCs) is much lower than the efficiency of a polymer composed of a body, a small molecule receptor polymer solar cells (of PSCs) efficiency thereof. Since the polymer having a donor PSCs length between the molecular skeleton and strong intermolecular forces, structured polymer film itself can form an interpenetrating polymer network suitable for the PSCs. Accordingly, when blended with small molecule receptor, it is easy to meet PSCs suitable phase separation, and therefore, without any post-treatment of most PSCs can provide reasonably efficient photovoltaic performance. However, for the SM-OSCs, since the chemical structures and physical chemistry of small molecules and small molecule acceptor donor material similar nature, it is difficult to achieve proper phase separation. Thus, although the SM-OSCs film having high charge mobility, but it is always relatively low Jsc and FF. In order to improve the photovoltaic performance of SM-OSCs, for a – is a very important receptor mixing the active layer nanotopography fine adjustment. Morphology of the active layer common way regulation are: physical methods like solvent additive solvent vapor annealing, thermal annealing; modification of a structure in the organic semiconductor material, such as engineering side chain, a fluorine atom, isomerization chemically, are aggregation and accumulation can regulate the molecular morphology, thus affecting the bulk heterojunction solar cell (a BHJ) morphology and photovoltaic performance.

the Institute of Chemistry / Suzhou University Li Yongfang Academy , Meng Lei researcher, joint Zhejiang University Professor Zhu Haiming al Based thiophene conjugated different side chain substituent starting synthesized small molecule to molecule to two kinds of materials, including an alkylthio SM1-S SM1-F and a fluoroalkyl group having a substituent, and substituted with an alkyl group as previously reported SM1, the influence of different side chains conjugated to a molecule to aggregate and photophysical, photovoltaic characteristics. The results showed that the receptor Y6 is, 120 deg.] C for 10 minutes thermal anneal SM1-F group the SM-OSCs The power conversion efficiency (PCE) up to 14.07% , is reported most SM-OSCs one good value. Furthermore, these results also show that crystallization and aggregation characteristics of different characteristic side chain thereof Small MoleculesHave a significant impact, thermal annealing treatment is effective to fine-tune the phase separation to form a suitable acceptor interpenetrating network, which facilitates exciton dissociation and charge transport, resulting in efficient photovoltaic performance. to the article entitled \”Adoption of the donor side chain engineering, thermal annealing process for preparing high-performance all-small molecule organic solar cells\” published in leading journals on international material \”advanced materials,\” corresponding author for the Institute of Chemistry Lee Wing-fang academician , Meng Lei, a researcher . 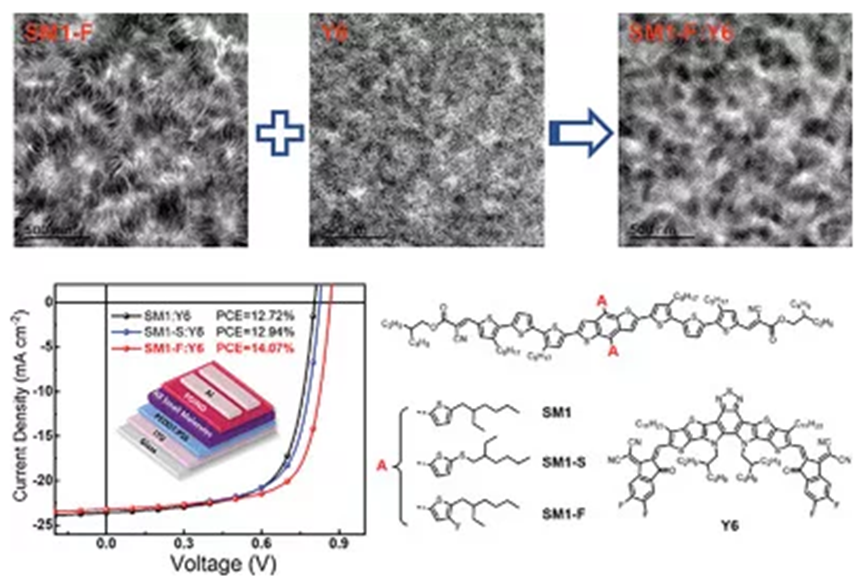 Researchers have different substituents on the side chain conjugated thiophene, comprising SM1-S alkylthio with fluorine and with Effects of the side chains of molecular aggregates as well as for photovoltaic and photophysical properties of the molecule and alkyl substituents SM1-F, and a donor molecule having alkyl substituents SM1 previously reported for different studies conjugate . FIG. 1 is a structural material molecular structure, fabricating a device, the optical properties of the new composite material, and a band diagram.

As shown in FIG. 2, the thermal annealing device performance improved significantly after the treatment, the optimum value of PCE device SM1-F group up to 14.07%, Voc values ​​up to 0.866V, Jsc value 23.25mA cm [123 ] -2 , FF value is 0.699, and the SM1-F-based mixed film device having a film thickness of 250 nm further efficiency of 11.9%, indicating the potential for a large area of ​​the prepared SM-OSCs, due to SM1- F: hole mobility higher Y6 mixing the active layer and the balance with the hole and electron mobility, bimolecular complex weak.

Conclusion Researchers have synthesized a series of wide-gap different substituents with a small molecular thiophene-donor conjugate on a side chain. In all of Y6 receptor SM-OSCs exhibited good photovoltaic performance. Wherein, based on the SM1-F SM-OSCs have a

up to 14.07% of the PCE , is one of the best efficiency of the SM-OSCs reported so far , which is preferably FF 0.699, higher Voc of 0.866 V. Further, based on the device SM1-F also has good thickness insensitivity, shows great potential for producing large area SM-OSCs. Morphological analysis showed that the small molecules of different side chain donor has a significant impact on its crystalline characteristics and aggregation characteristics. In addition, the thermal annealing treatment is effective to fine-tune the phase separation to form a suitable acceptor interpenetrating network resulted from efficient solutions excitons and charge transport, resulting in efficient SM-OSCs. This work not only to achieve efficient SM-OSCs, and a clear understanding of the effects of thermal annealing treatment and the side chains of engineering nanotopography, photophysical properties and photovoltaic performance of a photovoltaic material to provide for the further development and optimization of device SM-OSCs a guiding role. Reference Beibei Qiu et al. HighlyEfficient All-Small-Molecule OrganicSolar Cells with Appropriate Active Layer Morphology by Side Chain Engineering of Donor Molecules and Thermal Annealing, AM, 2020 DOI:. 10.1002 / adma.201908373.https: //doi.org/10.1002/adma.201908373

上一篇：Is perovskite! Gangster pinch frame, one to one to three \”Science\”