Fire in this area too, and this year has made 6 Nature / Science!

In recent years, a solar cell as a clean energy has become the research hotspot. This year, just in the past three months, the solar cell has published six papers in Nature / Science. Here we comb simple for everyone. .

One April 15 \”Nature\”: nano-scale defects, they are essential!

Although the machining liquid from the perovskite thin film at low temperature exhibit powerful, but that the preparation of such a large amount of crystal defects on the film. The band gap of the perovskite device having a plurality of defect states, which trap charge carriers will make them non-radiative recombination. These deep traps caused by a local change state photoluminescence, and limits the device performance. To date, origin and distribution of these trap states is not yet known. Cavendish Laboratory of Cambridge University professor Samuel D. Stranks and Okinawa, Japan University of Science and Technology University Professor M. Dani Keshav cooperation, the use of light-emitting electron microscopy latest halide perovskite thin films of trap states distribution imaging. By various test analysis indicated that the material structure and composition control is essential for optimal performance halide perovskite devices on the nanoscale. Related papers under the title \”Performance-limiting nanoscale trap clusters at grain junctions in halide perovskites\” in 2020, published April 15 in Nature. 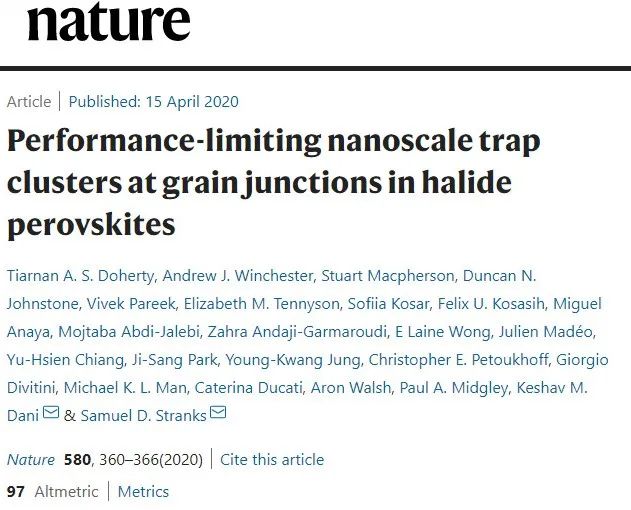 University of North Carolina Professor Huang Jinsong team reported a metal halide perovskite single crystal and polycrystalline solar cells trap states space and energy distribution. Trap density single crystal changes by 5 orders of magnitude, the minimum value of 2 × 1011cm-3, and most of deep traps located at the crystal surface. All the charge trap density depth larger than the inner film 1 to 2 orders of magnitude on the polycrystalline film interface. Inside the trap density high-quality single-crystal thin film off than 2 ~ 3 orders of magnitude. Even more surprising is that, after the surface passivation, near the interface with the hole transport layer and the perovskite detected most of deep traps in which is embedded a large number of nanocrystals, thus limiting the efficiency of the solar cell. Related to the results, entitled \”Resolving spatial and energetic distributions of trap states in metal halide perovskite solar cells\” published in Science.

University of Toronto Edward H. Sargent Academy of Sciences and King Abdullah University of Science and Technology Stefaan De Wolf [ 123] et al cooperation reported perovskite solution treatment (thickness of the order of microns) and the whole top of the battery textured crystalline silicon hetero-junction bottom cell combination, to obtain efficient and stable perovskite / Si tandem solar cells. After the power conversion efficiency of the solar cell break 25.7%, for 400 hours thermal stability test at 85 ℃, and at 40 ℃, the maximum power point after 400 hours test, which performance degradation is negligible. Researchers will benefit from this aspect of the depletion width of the bottom of the silicon pyramid has tripled. On the other hand, researchers will be self limiting passivating agents (butanethiol) was immobilized on the surface of perovskite, increasing the diffusion length and further inhibits phase separation. Related to the results, entitled \”Efficient tandem solar cells with solution-processed perovskite ontextured crystalline silicon\”, published in Science. Original link: https:. //Science.sciencemag.org/content/367/6482/1135.abstract

University of Colorado Michael D. McGehee and University of Science and technology of China Xu Jixian et people the alloy trihalide (chloro, bromo, iodo) adjusting the bandgap and stability perovskite semiconductors, 1.67 eV was prepared perovskite wide bandgap top cell. This top cell and bottom cell integrated in a siliconSince, to obtain an area of ​​1cm2 double ended monolithic tandem solar cell power conversion efficiency of 27% . This is mainly due to the replaced part bromo iodo, reducing the lattice parameter of enhancing the solubility of chlorine, light carriers and charge carrier mobility increased by 2 times, even in a case 100 such that the intensity of sunlight, the film light-induced phase segregation is suppressed; at 60 ° C, the maximum power point after 1000 hours of operation, the translucent top cell degradation less than 4%. Related to the results, entitled \”Efficient tandem solar cells with solution-processed perovskite on textured crystalline silicon\” published in Science. Original link: https:. //Science.sciencemag.org/content/367/6482/1135

6 February 19 \”Nature\”: to solve the problem of lead leakage lead toxicity and lead leakage and other problems perovskite solar cells hindered its further development. Tao Xu Northern Illinois University and Renewable Energy National Laboratory, who co-Kai Zhu, reported a chemical method for each device stack in front of and behind the lead coating of absorbent material to solve problems caused by lead leakage caused by damage to the device. On the transparent conductive electrode coated with a film containing molecular phosphonic acid group; and a metal electrode on the lead-containing chelating agent between the polymer film and the metal electrode is embedded into standard packaging film photovoltaic (packing film). Even if the device soaked in water, since the lead absorption film swell upon absorption of lead instead of being dissolved, so that the entire device structure can be maintained, thereby facilitating the collector lead devices corrupted. Related to the results, entitled \”On-device lead sequestration for perovskite solar cells\” published in Nature.