May 9, reporters learned that researchers in Sweden Chalmers University of Technology has recently announced a promising breakthrough results, they take advantage of the special structure of graphene sponge, improved performance of the cathode and electrolyte lithium-sulfur batteries. In order to meet future demand for electricity, new battery technologies will be essential. One strong candidate is lithium sulfur batteries, the theoretical energy density which is 5 times or more lithium-ion batteries.

The key to this is that the outcome of the graphene airgel, which is a made of a reduced graphene oxide comprising a porous, sponge-like structure material. In this experiment, the researchers imagine that it act as an independent electrodes in the battery, so that a more comprehensive and efficient use of sulfur. It is understood that the graphene oxide airgel airgel is a high strength, high elasticity, strong adsorption characteristics, a broad application prospect. According to reports, the \”carbon sponge\” with a high elasticity, still restitution is compressed 80%. It organic solvent having a fast, ultra-high suction force, a suction force is the highest reported to date materials. Existing products are generally only suck the liquid oil absorption of about 10 times its own mass, and the \”carbon sponge\” absorption amount of about 250 times, up to 900 times, and only oil absorbent. \”Big eaters\” to eat organics fast: such a \”carbon sponge\” to absorb 68.8 grams per gram of organic matter per second. This is reminiscent to deal with oil spills at sea it, \”they can be sprinkled on the sea, will be able to rapidly absorb the oil in, because of the elastic, oil absorbing recycling can be pressed out, \’carbon Sponge can also re-use. \”researchers expressed.

before the 2011 record of 0.9 milligrams per cubic centimeter, and later in the same year was 0.18 mg refresh data per cubic centimeter …… now this record is professor Gao Chao Zhejiang University (China news about the investigation, Professor name is superb, you lose Tucao name) carbon airgel prepared to break with a density of only 0.16 milligrams per cubic centimeter. Unlike airgel sol-gel method, freeze drying method they use carbon nanofibers and a mixed solution of graphene was dried, to obtain such a spongy material made of carbon. This material has high elasticity, it is compressed and can play back, and also has a high adsorption capacity fast, each gram of airgel can absorb up to store up to 900 g of oil at a rate of 68.8 grams per second .Obviously, this thing is best used to recover adsorbed marine oil pollution artifact. Of course, scientists are still trying to research this stuff for other purposes, such as energy storage, thermal insulation, at present, the laboratory is further applied research on the adsorption properties of this material as a catalyst carrier and the like. Researchers said \”carbon sponge\” may also be desirable to phase change thermal insulation material, the catalytic support, the sound absorbing material and a composite material efficiently. However, this material is just as newborn babies birth, scientists still difficult to predict accurately their applications and prospects, had to rely on the imagination of the industry and society, so that this new material out of the laboratory to application value. Conventional battery composed of four parts. First, there are two electrode support is covered with active material, i.e., positive and negative electrodes. The electrolyte is present between them, usually in liquid state, allowing ions to transfer back and forth. The fourth component is a membrane, which serves as a physical barrier to prevent contact between the two electrodes, while still allowing the transfer of ions. Prior to this, researchers have tried to make the cathode and electrolyte integration, combined into a liquid, the so-called \”catholyte\” *. This concept helps reduce the weight of the battery, and can provide better and faster charging of the power supply capacity. Now, with the development of graphene airgel, this concept proves to be feasible, and provides some experimental results are very promising. 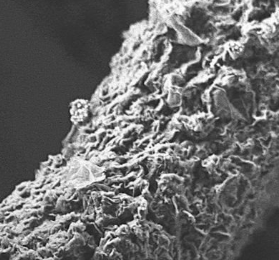 \”graphene airgel porous structure is the key which absorb a large amount of electrolyte, such that there is a sufficiently high that region\” sulfur \”density of the\” catholyte \”concept can be established. This semi-liquid\” catholyte \”allow sulfur cycle back down without any loss of circumstances, it will not dissolve lost – because it itself has been dissolved in it a,\” CarmenCavallo said. In order to give full play to the electrolyte, researchers are also added to the separator portion of the electrolyte solution, to maximize the sulfur content of the cell.