He Xi Min / Zhu Xinyuan \”PNAS\”: candle soot efficient deicing minus 50 ° light and heat does not freeze to ice the self-cleaning!!!

Ice could damage human activities, causing the danger of human life, it is a common problem of daily life. For example, icing and ice can lead to mechanical failure of the vehicle and aircraft; damage to the structure of the wind turbine, homes and power lines; slipping accidents and traffic collisions. Traditional strategies include heating anti-icing, chemical and mechanical de-icing. However, these methods are subject to energy-intensive, inefficient and environmentally unfriendly problems. To photothermal effect due to anti-icing without the addition of harmful chemicals and environmentally friendly. Recently, it was found that the plasma, magnetic particles and the light carbon nanomaterial can be used to heat the surface, the use of energy / heat and solar power generation melts ice. However, there are many challenges and limitations, such as an expensive material, difficult to manufacture; melting water in the absence of continuous illumination freeze again; dust and other contaminants may block the sun, resulting in low utilization efficiency of solar energy. Thus, the use of light and heat superhydrophobic effect, the development of multi-functional surface both melting ice, a new method in addition to water and other contaminants is needed. Recently, Professor University of California professor He Xi Min and the Shanghai University Jiao Tong University Zhu Xinyuan cooperation to Superhydrophobic photothermal icephobic surfaces based on candle soot was published in on the PNAS journal, the authors believe candle soot because of the characteristics of the structure and physical can be used to manufacture this versatile surface. Structurally, Incomplete combustion of soot so that the candle has a near-perfect hierarchy , this configuration makes the soot deposited on the substrate superalloy ideal coating. Physically, it has an excellent black photothermal conversion effect . In addition, it is also possible superhydrophobic further improved photothermal properties: First, the surface of the melt water can flow from the candle soot removal immediately, thus avoiding the melting of water due to reflectivity and thermal mass, which can greatly reduce heat loss. Second, dust and other contaminants to be easily washed or rain water from melting, and the barrier to prevent scattering of sunlight, thereby facilitating long-term high heat efficiency light. Based on the characteristics of the candle soot, which should be constructed to A cheap and efficient photothermal superhydrophobic coatings, it is possible to remove condensed droplets, frost and ice, andGreatly reduced the freezing temperature. This high-performance anti-icing a surface having a self-cleaning characteristics, high durability and light healing.

[Results and Discussion] 1 . PSCS production process by the broken sheet is placed over the candle flame, smoke candle easily deposited on glass slides (FIG. 1A). In order to enhance smoke candles layer (CS) layer, and the coating is more robust, the author of tetraethoxysilane (TEOS) in a chemical vapor deposition (CVD) coating of silica soot particles in the housing (SCS). Finally, under ultraviolet light polydimethylsiloxane (PDMS) onto silica brush housing. Therefore, the coating (of PSCS) consists of three parts CS particles, silica and PDMS brush housing (Figure 1B). CS particles generated heat in the sunlight, the silica shell enhancing coating, the PDMS brush imparting superhydrophobic coatings. PSCS surface has super-hydrophobicity and photothermal two properties: when it is irradiated with sunlight, the heat can be generated from the ice soot layer by photothermal effect of the melt, and because the top super-hydrophobic, water can easily roll off the melt ( FIGS. 1C and D). 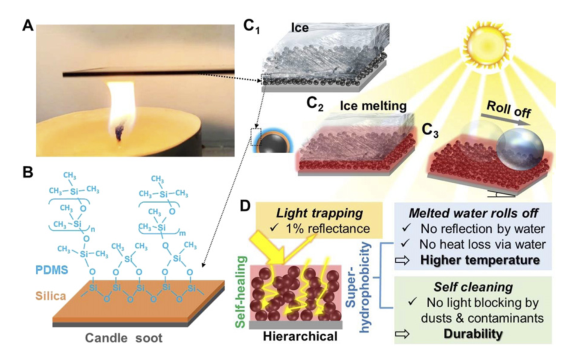 Figure 1 a schematic view of the manufacturing process PSCS surface. Soot deposition candle (A) on glass slides above the candle flame, then coated with silica and PDMS brush housing (B). (C) the working mechanism of the anti-icing surface. Under sunlight, since the photothermal effect (C2) generates heat, the surface (C1) is accumulated on the ice can melt while the melt water can be rolled onto the inclined surface (C3) on. Hierarchy (D) PSCS of. 2. PSCS When the hydrophobicity of the surface of the slides held above the candle flame, it acts as a barrier between the flame and oxygen, resulting in incomplete combustion and the production of carbon nanoparticles. The carbon nanoparticles coagulate and agglomerate formation CS layer. The layer is 30-40nm a diameter of interconnected carbon particles (FIG. 2A1 and A2). Due to the low energy surface of the carbon, CS layer is superhydrophobic. Static contact angle of water droplets in the CS surface is 161 ± 1 ° (Fig 2A3). Wrapped around the particles of silica soot particles is formed between the strong binding, which enhances the stability and robustness of the bare soot coating (FIG. 2B2). Since the hydrophilic silica, SCS layer is not hydrophobic (FIG. 2B3). graftAfter the PDMS, the morphology of the silica substantially remained unchanged (FIG. 2C1). SEM smooth the edges of the display between the particles showed PDMS successfully grafted onto silica (FIG. 2C2). Brush surface of the PDMS, the contact angle increased to 163 ± 1 ° (FIG. 2C3), while in the water droplet sliding angle less than 5 ° it is easy rolling. 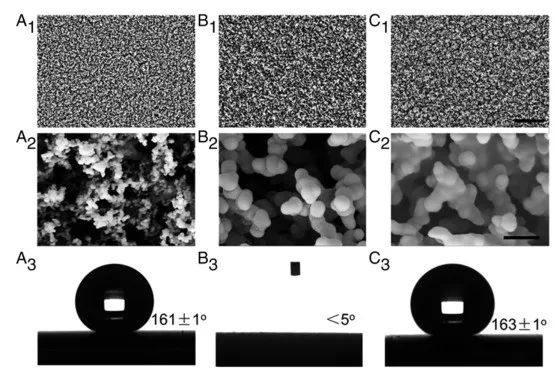 Figure 2. The morphology and surface wettability. (A 1 and A 2) SEM image of CS layer. (A 3) water contact angle surface CS. (B 1 and B 2) SEM image of the SCS. (B 3) water contact angle surface SCS. (C 1 and C 2) SEM image of the PSCS. (C 3) water contact angle surface PSCS. 3. P SCS SCS photothermal effect of CS CS thickness may be adjusted by changing the deposition time. Is a cross-sectional thickness of each layer of 30.0μm 1.5,5.1 and soot porous structure is uniform (FIG. 3 A-C). With increasing exposure time and the thickness of the soot layer, the coating temperature ([Delta] T) is greatly increased, reached a maximum after 300 seconds (FIG. 3D) 50 ° C when the thickness is greater than 10μm, ΔT no longer increases. This limit may be determined by the depth of penetration of sunlight. After irradiation, CS, SCS, and the △ T PSCS respectively 53.3,53.2 and 53.3 ° C, respectively, showed little silica and PDMS housing photothermal efficiency impact (Figure 3E). Further, as the light intensity increases sun 1.5 sun 0.5 sun and, [Delta] T increases to 53 ℃ and 73 ℃ (FIG. 3F) from 20 ℃. PSCS also shows infrared images of the temperature is uniform over the entire surface. Since the CS surface having a nanometer size which is smaller than the wavelength of the sunlight, can effectively absorb light, multiple internal reflections until fully absorbed light in the hierarchy. 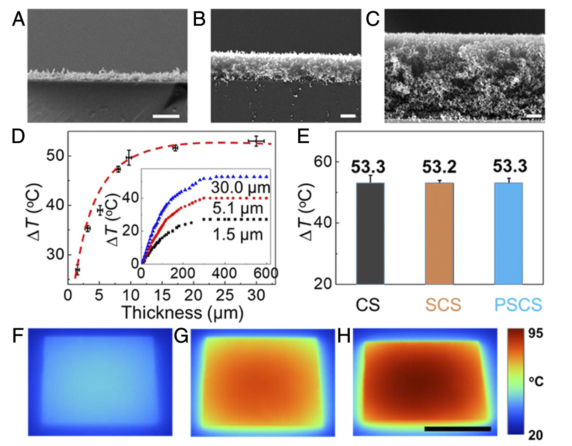 Figure 3. The thermal characteristics of the optical layer deposition CS. Thicknesses of 1.5μm (A), the cross-sectional SEM image of the CS 5.1μm (B) and 30μm (C) of. (D) CS in different thicknesses of a sun rise (ΔT). (E) CS, SCS and PSCS temperature rise (ΔT). (F) respectively at 0.5 sun (F 1), PSCS infrared image under 1.0 sun (F 2) and 1.5 sun (F 3). 4.And SCS PSCS frost and ice melting capacity compared to the dense transparent block of ice, frost and porous fractal, reflection and scattering of sunlight stronger by challenging the sun melt the frost. We investigated the ability of SCS and PSCS frost and ice are melting in the sunlight systematically. In PSCS surface, frost will begin to melt after 60 seconds of irradiation, the melted water droplets formed (FIG. 4A1) at the surface, the surface of the SCS process is required 240 seconds (FIG. 4A2). Further, the melted water remains on the surface of the SCS, while almost no PSCS surface water, a small amount of residual water-swellable into tiny molten droplets, it is easy to roll off from the surface of the platform. Within 720 seconds, the surface of the ice PSCS all melted, the water is easy to slide (Fig 4B1), but there are some surface ice SCS (FIG. 4B2). SCS remaining molten surface of the water reduces the thermal efficiency is, in contrast, no residue of PSCS melt water surface, surface temperature rises rapidly, almost 10 times higher than the surface temperature of the SCS. Compared with the mechanical de-icing method, having a melting ice photothermal effect without causing damage to the hierarchy, and after 20 cycles there deicing good stability. 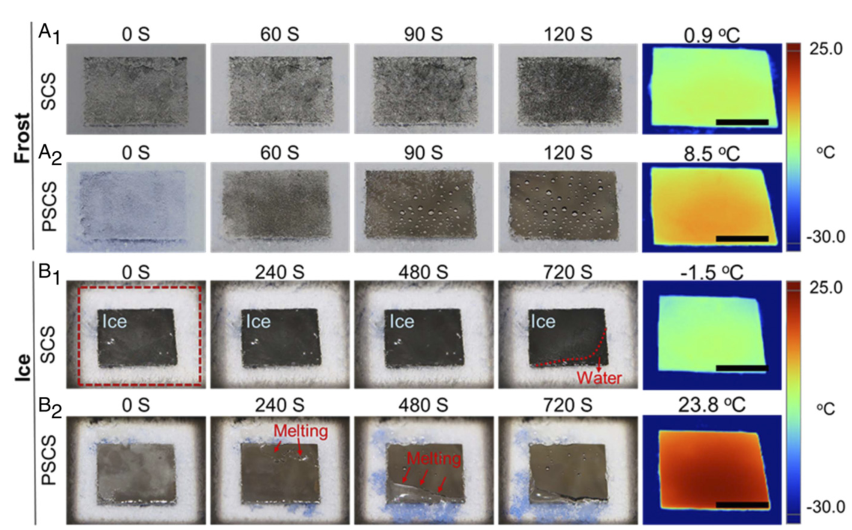 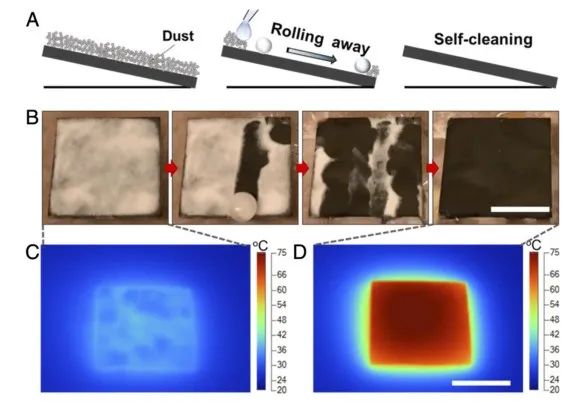 Figure 5. Effect of dust and temperature self-cleaning property. (A and B) a schematic view of self cleaning. (C and D) PSCS infrared images from before and after cleaning. Conclusion photothermal OF candles prepared anti-icing coating of soot, the coating having good mechanical toughness. As the sunlight in the nano / microporousStructure can be reflected a plurality of times, effectively improving the adsorption performance, the hierarchy photothermal performance is critical. In the melting process, water droplets roll off easily, PSCS frost and ice accumulated on the surface melts faster, virtually no residual water, thus having better light PSCS surface thermal performance. Meanwhile, the surface of PSCS self cleaning ability, rain and melted water will fall and remove dust and other contaminants to prevent blocking or scattering light, ensure long-term avoidance of ice and the thermal efficiency is. PSCS surface can also take advantage of the sun\’s heat recovery thermal effects of super-hydrophobicity. PSCS in the preparation of cheap, simple and environmentally friendly, energy-saving anti-ice surface has great prospect.

上一个：Water also has a glass transition? Tg and how much? Do not worry, listen to how bigwigs say