(CO2) a sharp increase in carbon dioxide emissions on the global climate caused serious consequences, extreme weather seems to be increasingly common across the globe, which had a huge threat to the life and survival of all life on earth. Since photocatalytic technology can directly use the solar sustainable CO2 molecules in the atmosphere into valuable carbonaceous fuel, so it is a source of energy while mitigating environmental pressures and promising approach. But visible light is achieved by driving with high selectivity and durability of carbon dioxide into remains a daunting challenge, especially considering how abundant element in the Earth\’s future to achieve this large-scale application. Currently, molecular CO2 photochemical reduction catalyst has proven to be effective method of preparing a specific product, such processes mainly molecular catalyst (usually a metal complex thereof) in combination with the solid semiconductor material, a semiconductor to absorb photons of visible light effectively in electronic form energy transfer to the catalyst, to achieve selective reduction of the carbon dioxide. But, based on molecular catalyst rich earth transition metals such as Fe or Mn easier to influence secondary reactions or photochemical instability byproducts / byproducts of degradation suffered by the stepwise structure. Further, the bimolecular reaction (catalyst, sensitizer and electron donor / electron acceptor between thereof) may severely limit the performance of a homogeneous catalytic system. To date, only been reported in several semiconductor solid catalyst (e.g., metal oxide such as TiO2) in catalytic applications for visible driven, most of which have poorer catalytic selectivity, which is a major problem in competition with hydrogen evolution . [research] To solve the above problems, recently, Professor Marc Robert University of Paris, France, the United Dongguan University of Technology Professor Chen Gui by metal complexes Coqpy-Ph- COOH via an amide bond covalently to the semiconductive polymer (mpg-C3N4), built a new molecule – material hybrids . Experimental results show that the metal complexes (Coqpy-Ph-COOH) and the mesoporous between semiconductive polymer (mpg-C3N4) by a chemical bond strong association with molecules of the material such that the 4 days after the irradiation (about 500 catalytic cycle, No structure degrading) according to any excellent long-term stability, and to obtain a 98% selectivity to achieve an effective reduction of CO2 CO . Such selective molecular catalyst with unique simple and robust combinations of materials for the semiconductor light-driven CO2 reduction catalytic a new way. The research results, entitled \”Efficient Visible-Light-Driven CO2 Reduction by a Cobalt Molecular Catalyst Covalently Linked to Mesoporous Carbon Nitride\” paper published in the \”Journal of American Chemical Society\” (see the text description link).

Preparation of [Detailed graphics] 1.Coqpy@mpg-C3N4 hybrids as shown in Scheme 1, 1- ethyl-3- (3- (dimethylaminopropyl ) carbodiimide (EDC, 3.05 mg, 16μmol) and triethylamine (TEA, 2.2μL, 16μmol) was added to the constantly stirred solution Coqpy-Ph-COOH (4.48 mg, 8μmol) in DMF (5 mL) suspension of in. the mixture was stirred at room temperature for 20 minutes and then dissolved in 0.5 mL DMF in 1-hydroxybenzotriazole (HOBt, 2.14 mg, 16μmol) was added and stirring continued for 1 h, then dissolved in 2 mL DMF in mpg-C3N4 (80 mg) was added to the mixture, stirring for 7 days, product was isolated by filtration on a nylon membrane (0.1μm). after filtration, washed with ultrapure water Coqpy @ mpg-C3N4 several times and then vacuum The precipitate was dried to give Coqpy @ mpg-C3N4 hybrids. Finally, by IR and XPS analysis showed the successful preparation obtained Coqpy @ mpg-C3N4 hybrids. 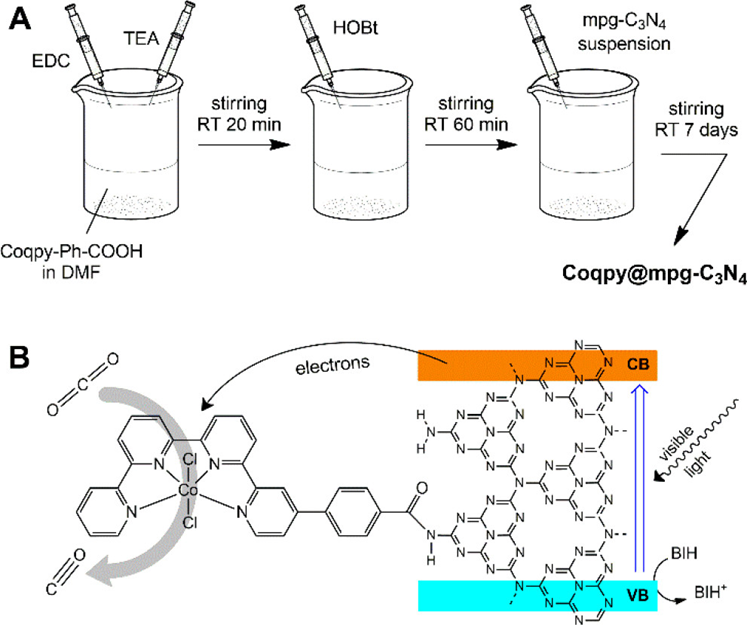 FIG. 2. mpg-C3N4 (black), A Coqpy / mpg-C3N4 (blue) and Coqpy @ mpg-C3N4 (red) hybrids) is transient (on / off) in response to the photocurrent, B) EIS response. 3. visible driving dioxide catalyst reduction catalyst Coqpy @ mpg-C3N4 catalyst suspension in the visible-light illuminating state in which the reduction of CO2 to CO selectivity 97%, the liquid phase was not detected formate, and Coqpy @ mpg-C3N4 efficiently and stably sustained released within about 4 days the product gases CO, TON value reached 254, as shown in Figure 3. Origin is determined by using the carbon isotope-labeled 13CO2 experiments demonstrated reduced product obtained as a 13CO. Under a chart recording the data obtained in different kinds of catalyst in 24 hours. To further investigate the stability of a hybrid body photocatalytic activity, we use the same catalyst reuse hybrids four consecutive cycles. Each cycle corresponds to a standard Coqpy mpg-C3N4 / BIH / visible radiation 24 hours PhOH ACN solution. After each cycle, the hybrid photocatalytic bodyWas washed with ACN agent under sonication, followed by centrifugation. After drying, the hybrids photocatalyst dispersion containing a new ACN PhOH BIH and in again, and then the solution was saturated CO2 reached within 30 minutes, and then start a new light catalytic cycle. The results (Figure 4) shows that each cycle can be achieved in the catalytic reduction to produce CO.\’S high stability, the complete structure of the catalyst described in the overall radiation catalytic process, catalytic activity was not decreased; it also illustrates one aspect of the light The catalyst can be easily recovered for further use. And 96 hours to reach 500 catalytic cycles. 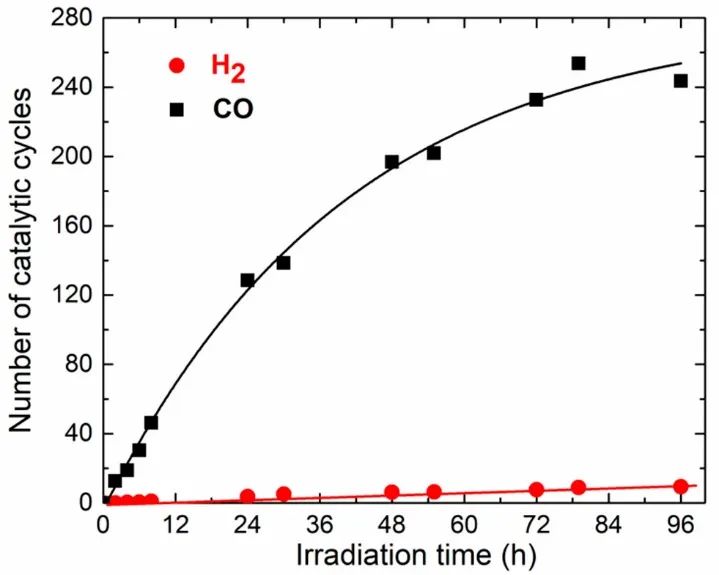 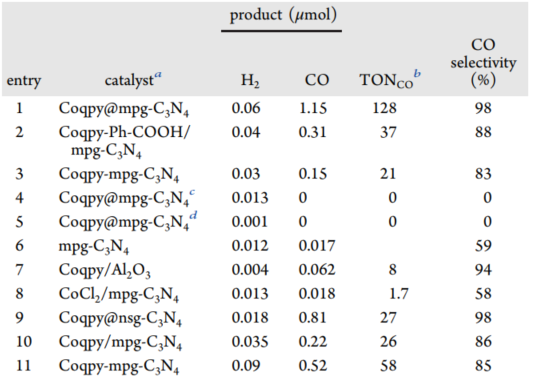 a reaction conditions: CO2 in a saturated solution of ACN containing 0.05 M BIH and 0.03 M PhOH in 6 mg of the catalyst (3μMCoqpy) having a diaphragm 6 mL quartz cell used as the reaction vessel, and equipped with a 400 nm long-pass filter AM1.5G solar simulator is used as the illumination source reaction time: 24 hours amount of the catalyst in Coqpy:.. mpg-C3N4 covalently linked (Coqpy @ mpg-C3N4), 3μM in; carbon nitride (Coqpy / mpg-C3N4 ) were mixed, 3μM; adsorbed on the surface of the carbon nitride (Coqpy-mpg-C3N4), 2.5μM; and Al2O3 (Coqpy / Al2O3) mixture of 3 uM; in nsg-C3N4 (Coqpy @ nsg-C3N4) covalently linked 9μM.b relative to the amount of CoCl2 or Coqpy .c .d under an argon atmosphere in the dark (as a result of a mercury lamp irradiation source available)

[summary] Coqpy @ mpg-C3N4 excellent binding selectivity and stability of the molecular catalyst is a solid material, carbon dioxide is used to achieve long-term stability of the high selectivity to photocatalytic reduction of carbon monoxide. The independent adjustment of experimental subjects and a metal complex structure of the semiconductor material (band gap energy and the conduction band modulation), and adjusting the electron interaction between the two components provide a new path for the development and optimization of highly active catalytic metal material visible for carbon dioxide reduction drive provides a new strategy. Original link: https: //pubs.acs.org/doi/pdf/10.1021/jacs.9b13930