The photocurable (meth) acrylate composite material in a resin matrix, an inorganic filler material dispersed in the polymer composite, in-situ radical polymerization agent may be cured by light field, having easy operation advantages, so widely used, can be used as adhesives, coatings, 3D printing materials, aerospace materials in the biomedical field, such as the large number of applications in dental materials is to promote the study of this material. At present, large-scale application of dental composites, in clinical application The reaction conversion rate group 55 to 75%. The higher the conversion rate of the reactive group, the strength of the composite material, surface hardness, and flexural modulus of elasticity, the better the performance, and a low residual monomer amount, unreacted monomer may be reduced immersion risk from composite materials to the surrounding tissue. Addition of nano and micro inorganic filler can be improved composite strength, toughness and wear resistance, reduced volume shrinkage stress during solidification, but at the expense of the conversion rate of the reactive groups of the cost. Infrared spectroscopy (FTIR) method This study is a reactive group conversion system most commonly used method, differences in band by comparing aliphatic monomers and polymers absorption, can be quantitatively described group change of conversion (DC) of. However, the fatal drawback of this method is characterized by the lateral resolution is too low, difficult to study microscopic scale, such as the conversion rate of the reaction space is between the filler particles and the matrix particles changes. This is important, however, because of the microstructure, in particular the conversion of the group at the interface with the resin and the filler determines the physical and mechanical properties of the material.

Based on the above analysis, Oral Rehabilitation Department of King\’s College London Professor Owen Addison Task Force [123 ] the infrared light imaging environment (IRENI), with a multi-beam source and the synchrotron focal plane array (FPA) detector IR microscope, photocurable (meth) acrylate composite micro-scale the reaction of the substrate conversion and residual strain in a quantitative study , found that conversion is the lowest group near the filler particles in a resin matrix, and only 40%, with an increase from the particle from the center of the group conversion continuously improve,It may be up to nearly 80%, and the efficiency of initiation is higher than the TPO photoinitiator camphorquinone (CQ). at the center of the filler particles, the residual strain of the material is low, as the distance increases, the residual strain is gradually increased. This study illustrates the composition of the matrix resin, filler and how conversion MICROSTRUCTURE composite material was established, a filler – the link between the interface and the material properties of the resin. Note: According to 2020QS World University Rankings, KCL\’s dentistry ranked first in the world. 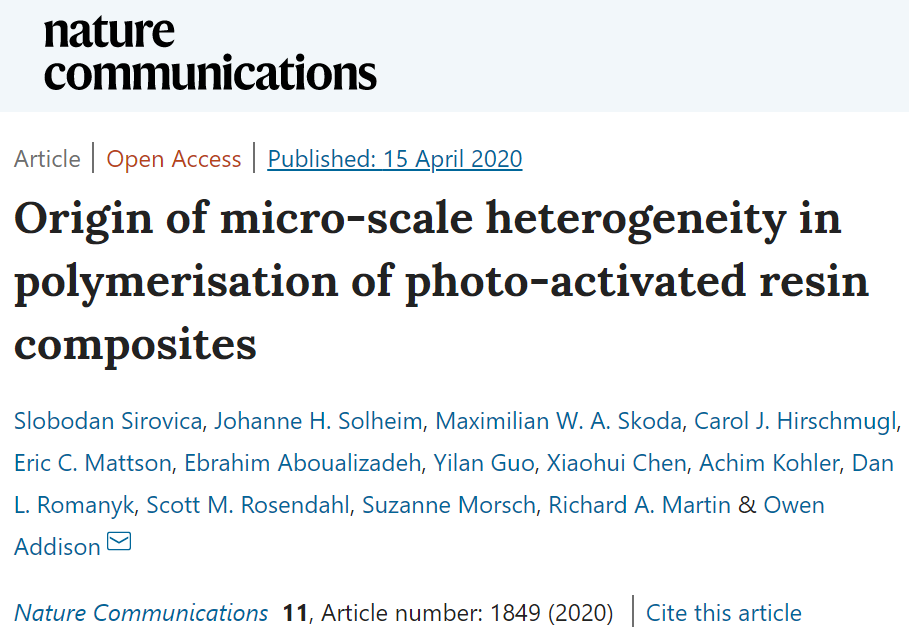 The conversion of a group change between the filler particles

Summary In order to clarify the photocurable group on the conversion of (meth) acrylate composite micro-scale difference and the strainIsobutyl, King\’s College London Professor Owen Addison TF using IRENI technique to study the Bis-GMA TPO and CQ initiated / TEGDMA / SiO2 composite free-radical polymerization photoinitiator difference between groups during the conversion of the filler particles and strain. Group conversion was found at the center of the lowest 40% of the particles, with the distance from the center of the particles increases, increasing rate of conversion, up to 80%. TPO photoinitiator efficient than CQ initiator: 70/30 and 60/40 wt% blend of the system, when the initiator is in TPO, CQ system conversion ratio increased by 20% and 10%. Residual strain in the composite filler particles in the lower center, with the center farther from the particle, the strain increases. For the CQ initiator system, a negligible change in strain, and strain TPO initiator system is large. Original link: https: //www.nature.com/articles/s41467-020-15669-z