Eukaryotic cells in living tissue in a spatially varying alignment order to form a dynamic pattern so important physiological processes such as apoptosis and cell migration. The challenge now is how to provide an alignment sequence of pre-designed pattern on tissue growth. Cells closely contact each other forming a living tissue, often due to mutual alignment of anisometric cells exhibit the sequence alignment. Average orientation direction indicated by the sub-guide in time and spatial change, resulting topological defects called dislocations. These defects movement within the organization, and the compression – stress relaxation and dead cells, such as extraction processes play an important role. In the biomedical field and actuating the active substance, living cells designed for tissue scaffold having a sequence alignment and topology type and a method of controlling the kinetics of defects is very important. 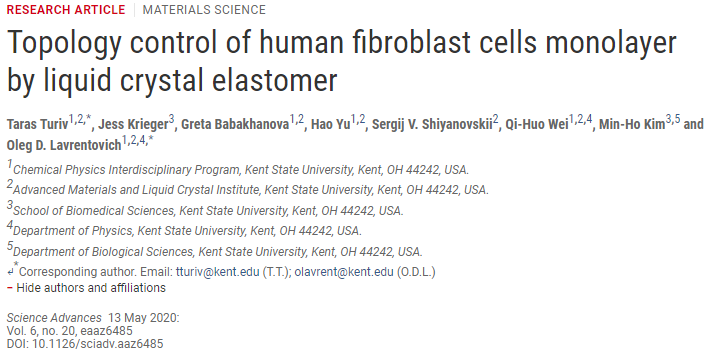 Recently, professor Oleg D. Lavrentovich team Kent State University in \”Science Advances\” describes a method of using the optical alignment of the liquid crystal elastomer (LCE) expansion anisotropy in an aqueous medium to produce a predesigned orientation with topological defects and pattern into a fibrous human skin cell monolayers. LCE pattern engraved on the monolayers are copied, and caused a strong spatial variation in cell phenotype, and fluctuations in the number and density of surface density. Anisotropic surface anchoring suppressed melting kinetics of the intrinsic defects of an active material, so that the elastic characteristics of the tissue can be estimated. This collective behavior of a control method of patterning LCE living tissue cells, the potential for cell differentiation and tissue morphogenesis. On the molecular orientation before polymerization precursor LCE by plasmon patterned photo-alignment. Then precursor by ultraviolet (UV) light polymeric molecules fixed nanometer order. Finally, the aqueous dispersion of the cells deposited on the substrate LCE. LCE anisotropic swelling in water will produce a non-planar topography, the topography guiding elongated human dermal fibroblasts (HDF) after contacting the substrate orientation. Inoculation and cell division organization together to produce fusion, HDF cell arrangement pattern follows the guide sub LCE predesigned pattern. Sequence parameter SHDF results indicate that the sequence orientation is mainly caused by direct interaction of each cell with a substrate of the LCE.

of the elongated elastic LCE is caused by anisotropy, and when the

still remain in the spatial variation. Even very close (~ 10μm) gradient divergent topological defects core grains may still be elongated along the

spatial variation. This function will be extended to the orientation capacity LCE substrate a spatially varying pattern. HDF cells may follow a predetermined guide sub

(r) assembling a self-organize into alignment. By the presence of +1/2 and -1/2 proof dislocations, assembling the alignment order of the non-polar,

. Core core and the median LCE wrong co-localization of these dislocations. In the \”wet\” the activity of a nematic phase and conservation of momentum due to the high mobility of the defect +1/2, + 1/2 and -1/2 defects tend to be unbound. 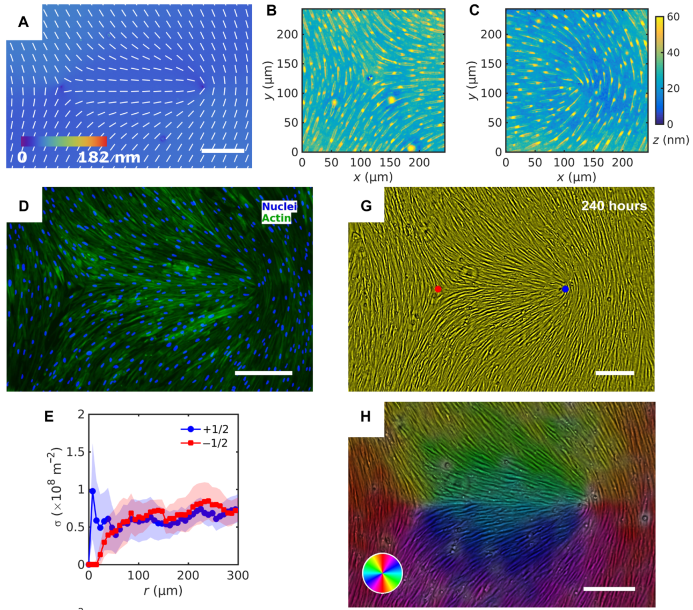 HDFLCE patterned alignment guide sub-cell expanded or curved to follow the pure integer +1 defects. Local cell density increases in the vicinity of the nuclear +1. At a distance of 20μm core, the cell surface density of defects radially +1 σ≈0.5 × 108m-2, away from the core than the density (r = 300μm) is 0.35 × 108m-2 1.5 times higher. +1 circular defects having a higher aggregate capacity of cells: σ≈1.5 × 108m-2. In contrast, the defect -1 +1 HDF cell defect density lower than three times, σ≈0.5 × 108m-2, which is 25% to 30% lower than the density of the core away from the defect. LCE matrix has a significant impact on the size and shape of HDF cells. Because the cells are contacted with each other, with a strong [sigma] LCE vary in different patterns, the differences in size and shape into the cell. +1 defect in the vicinity of HDF approximately elliptical, and the cells near the defect -1 is longer.

On the light pattern demonstrated LCE structure having spatially varying molecular orientation substrate may have a biological tissue for growing arrangement predesigned cells. Future technology may LCE substrate, the further development of the proposed dynamic morphology LCE by chemical functionalization, has manufactured environmental response, a deeper understanding of the basic mechanisms of tissue development and regeneration