Photodynamic therapy (photodynamic therapy, referred to as PDT) as a minimally invasive and localized cancer treatment, the disease has been made in the clinical treatment of esophageal cancer, head and neck cancer, eye cancer, skin cancer, breast cancer and lung cancer, etc. good effect. PDT photosensitizers by toxic (typically a porphyrin derivative) and the light (generally near infrared light) and the role of oxygen, the generation of reactive oxygen species (reactive oxygen species, referred ROS) induced cytotoxicity and promote cancer withered death or necrosis, and further eliciting an immune response in and around the tumor, the tumor regression. Although very powerful as a PDT treatment, but there are the following disadvantages:

As a representative one of the second generation photosensitizer compound, porphin bacteria (bacteriochlorin) has become a candidate for solving all of the above problems. Porphine reducing bacteria as a porphyrin derivative, which has the following advantages:

mainstream and photosensitizers such as porphyrins chlorin, are based on the mechanism of Type II PDT, singlet oxygen is generated by the excited state of the photosensitizer coupled to a ground state oxygen to kill cancer cells, the disadvantage is totally dependent on oxygen. And the bacteria can be porphine type I PDT, i.e., molecular oxygen or other photosensitizer excited state to thereby generate the active oxygen species in the redox reaction, typically including superoxide anion (of O2-), hydrogen peroxide (H2O2) and hydroxyl free group (OH). Due to the nature of the type I PDT lightOxidation leads to the electron transfer reaction initiated reduction can damage redox balance, induce cell death in the tumor microenvironment, and thus can tolerate relatively hypoxic environment. Redaporfin As a second generation photosensitizer, currently based on bacterial products include porphine have been clinically approved in Europe TOOKAD for the treatment of prostate cancer, and ongoing clinical trials for the treatment of biliary tract cancer, both achieved good clinical treatment outcome. At the same time, due to bacterial porphine very sensitive to light and oxygen, as reducing porphyrin derivative, having a lower redox potential, the Type I mechanism while PDT effect, but also makes routine clinical photodynamic bacterial porphine photobleaching under treatment conditions (photobleaching) prone to loss of efficacy. It can be said that contrary to the original purpose of PDT, this would greatly weaken its proper treatment. Is there a way to maintain the stability of live bacteria PORPHINE both, let it not so easy to photolysis, but able to retain all the advantages already has it? To solve this problem, researchers began fine and full of creative exploration. As a new light-sensitive material of nano – nano metal – organic frameworks compound (nanoscale metal-organic framework, referred nMOF), because it has a porous structure is conducive to the diffusion of active oxygen to prevent self-quenching of the regular frame structure, the higher the photosensitizer loads and good biocompatibility, ideal for PDT of nano-drug. Recently, professor at University of Chicago Lin Wenbin laboratory reported Nano MOF stable as a carrier of bacteria porphine, successful synchronization type I and type II photodynamic therapy, and breast cancer in mice with colon cancer model an excellent effect. 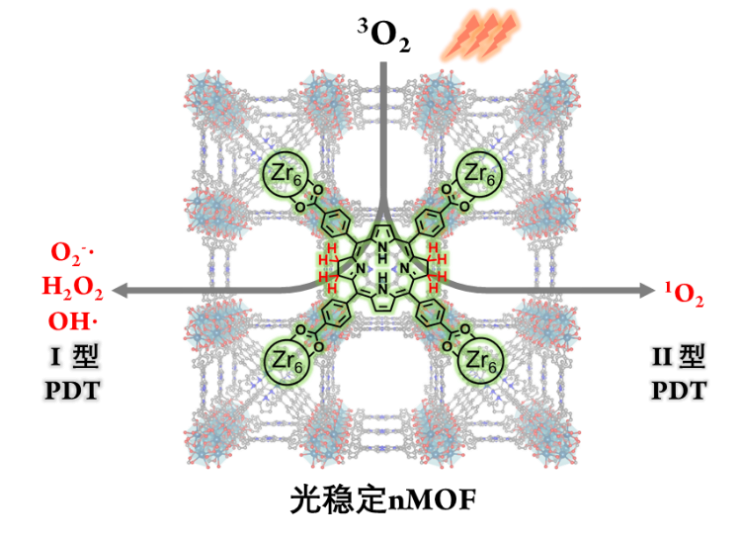 Researchers first Tetrakis acid bacteria as nMOF porphine ligands having a high symmetry (abbreviation TBB), and synthesized having a diameter of approximately 100 nm by reaction with PCN solvothermal of ZrCl4 MOF -224 nano structure (abbreviated Zr-TBB). Zr-TBB ultraviolet absorption spectrum which shows a strong absorption near 740 nm, while the PXRD diffraction pattern and TEM demonstrate good Zr-TBB crystallized, having a potential for a nano photosensitizer.

porphine bacterial oxidation process is a light ring [2 + 2] peroxidation of the double bond from the reaction of starting porphyrin, then will reverse [2 + 2] ring opening diketone structure, a last continuously no decomposition reaction becomes photoactive debris. Throughout the course of the reaction, the bacteria will porphin large conformational changes, in order to meet the geometry transformation sp2 and sp3 carbon center. We hypothesized that the fixed structural framework Zr-TBB nMOF, since four clusters benzoic TBB is coupled zirconyl, TBB difficult to produce conformational changes and structure, and therefore free from bacteria porphine in Zr- TBB photooxidation bacterial porphine ligand is suppressed. Experimental results have confirmed the conjecture researchers, under light illumination LED 740 nm 100 mW / cm2 a, Zr-TBB exhibits excellent light stability. Thus, Zr-TBB photosensitizer as bacteria-based nano porphine, and significantly enhance the stability of the bacteria porphine.

上一篇：The most popular of the past two years, chemistry, materials research what?