\”Nature\” as \”the father of sugar,\” the Seeberger broke the world record in the history of the longest synthetic polysaccharide!

Polysaccharides is a class as nucleic acids, proteins of biological macromolecules, plays an important role in the life processes. Due to the complex structure of the polysaccharide and microheterogeneity exists, and no image synthesis such as nucleic acids and proteins may follow a fixed template, the synthesis problem so long plagued polysaccharides synthetic chemists. Arabinogalactan (Arabinogalactan) is an important polysaccharide, which is an important component of the cell wall of Mycobacterium tuberculosis, related to the viability and virulence of bacteria. The molecule consists of a galactan chain (A-chain) and two close proximity arabinan chain (B-chain) consisting (FIG. 1), having a highly branched structure that is not only chemically synthesized cell wall of Mycobacterium tuberculosis Interpretation of synthetic biological mechanisms provide a basis, but also helps the development of new vaccines against TB sugar. Because of this, the polysaccharide molecule the past two decades has been attracting interest at home and abroad carbohydrate chemistry research team; however, the molecular structure is complex, there is a huge challenge its synthetic.

More recently, inspired by automated synthesis of polynucleotides and polypeptides, Peter Max Planck Institute for H. Professor Seeberger Task Force In automatic synthesis apparatus polysaccharide (AGA) by step 201, only 188 hours to synthesize a polysaccharide carbohydrate segment 100 length, breaking the previous record 92 in a yield of 5 %. They also synthetic oligosaccharide 30 and 31 of the block length [31 + 30 + 30 + 30 + 30] prepared by reacting a branched chain segment length 151 poly mannosidase, yield 41 through coupling %. This study proposes a method of long-chain polysaccharide compound A structure determination of the rapid synthesis of , and the biological material will be conducive to the development of science.

Synthesis of linear polysaccharide of of block length 100

For the synthesis of compound 100 linear polysaccharide chain length, the researchers in the AGA was added Merrifield polystyrene resin containing a photocleavable group and mannose reacting 19 μmol of 2, each process by the step 4 composition: ① acid for 20 minutes to remove residual alkali; ② 20-60 minutes glycosylation, mannose 5-6.5 eq; ③ protective nucleophilic groups unreacted for 30 minutes; ④ removal of Fmoc carbonate protecting groups 14 minutes, to carry out a next glycosylation reaction. The above four steps can be repeated for increasing the chain length of the polysaccharide. When the polysaccharide with increasing chain length, the glycosylation reaction time increases, the chain length of 40, increased to 20 minutes from the time 40 minutes, more than 80, glycosylation time was prolonged to 60 minutes and after 188 hours polysaccharide chain segments 100 to increase. Initially added 9 g mannitol 2, the finally obtained 39 mg of α- (1-6) – poly mannosidase 3, 5% yield . by automated synthesis methods, researchers have synthesized a polysaccharide compound of the longest segment, greatly reduces the synthesis time .

To prepare branched structure of the polysaccharide, researchers resin 5 as the carrier, mannitol 2 as raw material, 45 hours after synthesis of linear α- (1-6) – poly mannoside 6, the light solution, trichloroacetonitrile or post-treatment to give the fluoro-deoxy-7 and compound 8. The researchers then mannose structure 2 and 9 were synthesized branched chain length of 31 to 10 polyethylene mannoside. They silver trifluoromethanesulfonate – ferrocene chloride as activating agent, 6 to 10 equivalents of Compound 8 and 151 were synthesized dendrimer polysaccharide chain length of 11, 78% yield, but also produces a 20 121% byproduct length segments. For 16 h Compound 11 was added sodium methoxide to remove the 148 ester protecting group thereof, and then introducing hydrogen with palladium / carbon catalyst, hydrogenated 72 hours removing 302 benzyl ether and a Cbz protecting group, the final to give the fully deprotected compound 12 in 41% yield, identified by 12 is branched by far longest synthetic branched polysaccharide by 1H, 13C NMR, and MALDI-mass analysis. 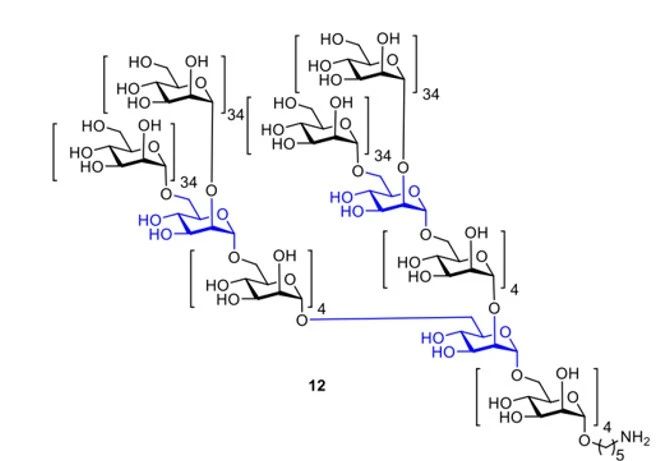 Summary Max Planck Institute Professor Peter H. Seeberger research group in AGA to PS resin as the carrier, mannitol 2 as raw materials, only took 188 hours to synthesize a 100 poly mannoside compounds length of chains, 5% yield, 92 breaking the record length segments. Each pickling process, glycosylation, four protection and deprotection steps, this process can be repeated increasing chain length of the polysaccharide, the polysaccharide with increasing chain length, the glycosylation reaction time increases, the chain after more than 80 long, glycosylation time increased to 60 minutes. They are also at a chain length of 30 linear branched polyethylene mannosidase 7 and 8, a chain length of 31 to 10 polyethylene mannosidase dendrimer synthesized polysaccharide chain length 151 of 11, 148 in addition to removalAn ester group, a benzyl ether and 302 after a Cbz protecting group, to give a far longest branched polysaccharide compound in 41% yield.