In recent years, advances in technology, metal nanowires, scientists have developed a new method for the preparation of a lightweight metal foam under mild conditions, while the density can be customized, also choose a metallic material. In aqueous suspension Cu nanowires, for example, may be prepared lightweight airgel porous Cu or critical point dried by freeze drying. Recently, the California 劳伦兹利弗 Livermore National Laboratory researchers published a study, introduced a new method for preparing a controlled density and pore structure of ultra-light airgel Ag nanowires, the use of this preparation methods for the first time a low density of 4.8mg / cm3 Ag foam performance. Related research published online last week in the journal Nano Letter. ( \”Ultralight Conductive Silver Nanowire Aerogels\”).

Previously, 劳伦兹利弗 Livermore National Laboratory in the field of ultra-lightweight materials many achievements. The researchers synthesized by a modified polyol prepared silver nanowire prototype, then purified by selective precipitation. As follows: Configuration of about 100ml containing 0.05mM NaCl, 0.189M PVP, about 0.0014mM AgNO3 and ethylene glycol solution of 0.017mM CuCl2 was added to a round bottom flask was preheated to 185 deg.] C, oil bath for one hour; then, with vigorous 30mL dropwise with stirring a freshly prepared solution of ethylene glycol added AgNO3 (0.12 M); after completion of the reaction, the flask was removed from the oil bath and cooled to room temperature, to obtain a silver nanowire and a small amount of silver nanoparticles. 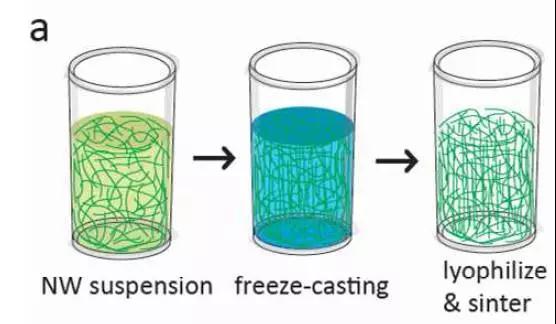 Researchers such silver nanowires aerogels performance test, the conductivity was found to reach 51000s / m. Its mechanical properties test results show that the silver nanowires airgel showed a \”resilient reinforcing\” behavior, the Young\’s modulus of up to 16800Pa. \”Interestingly, the results show that Ag nanowire deformation mechanisms that we prepared with conventional metal foam airgel prepared by different, which is due to bending deformation, which means it has over other foam or airgel higher structural strength, which is another hidden advantage of it, \”the researchers said:\” for such a good performance reasons, it remains to be further modeling to reveal. \”