NMR or will be undermined, nuclear resonance breakthrough!

Years later, several quantum engineering scientist at the University of New South Wales, Australia might also think that an accident had occurred in the laboratory explosion. Day, they created a device comprising an antimony atom and a special antenna, after the optimization means may generate a high frequency magnetic field to control the nuclei. Experimental requirements very strong magnetic field, so that several researchers put a lot of energy, result Antenna explode! at the time of the experiment to continue, they had an unexpected and significant discovery – Nuclear resonance! \”This landmark achievement will open up a treasure trove of discoveries and applications.\” Interview, Professor Morello core team, said: \”We have created this system has enough complexity to study every day we experience the classical world how the quantum emerges from the art. Further, we can use it to build complex quantum electromagnetic field sensitivity of the sensor is greatly improved. all of which are carried out in a simple silicon electronic device, it can be controlled by a small voltage applied to the metal electrode. \”

for a non-zero magnetic moment of atomic nuclei under the action of external magnetic field, the magnetic moment of the corresponding spin level Zeeman splitting will occur, as shown in FIG 1 (b) Fig. At this time, plus a certain electromagnetic radiation, when the radiation energy is exactly equal to the energy difference of adjacent spin nuclei, the nuclear spin resonance can absorb RF radiation of a certain frequency, the physical process is a nuclear magnetic resonance (NMR, Nuclear Magnetic Resonance). Since the NMR technique found that MRI technology has been widely applied in the fields of chemistry, medicine, materials science and mining in recent years, general-purpose applications in the field of quantum computer are also high hopes. However, the coil generating a magnetic field requires a large current and large, and it is difficult to limit the magnetic field in a small space. Thus, a large area of ​​the same nuclear spins will respond to the same signal, thereby preventing spin process alone. As the saying goes, electromagnetic, regardless of home. And NMR similar to the nuclear quadrupole nuclei is not equal to 0 (spin ≧ 1,NUCLEAR non-spherical distribution of charge), under the action of an electric field gradient outer core (EFG), it will form a series of quantized energy level of the source. When energy equal to the applied RF field adjacent quadrupole level, generating quadrupole absorption corresponding check the specific frequency, the corresponding process is referred to as Nuclear Resonance (Nuclear Electric Resonance, NER) . Compared with the magnetic field, a small electric field may be at the tip of the electrode is generated, and starts from the sharp tip of the attenuation, which will control the individual atoms in the nano-electronic devices easier. That is, NMR was compared to a type of atoms detection and control , Nuclear resonance atom may be further achieved a the detection and control . Thus, an ideal way to quantum devices based on the size of the expansion of the nuclear spins of the spin is performed using RF electric field control. As early as 1961, MRI pioneer and Nobel laureate Nicolaas Bloembergen put forward a theoretical point of this strategy is crucial: For a spin I> 1/2 and non-zero electric quadrupole moment qn nuclei, nuclei in the lattice points if the lack of inversion symmetry point of the solid, the nuclear spin resonance field can be induced by adjusting the conversion of nuclear quadrupole effect. However, half a century later, this idea has not been realized in a single nuclear experiments. based on the discovery, Professor Andrea Morello team intensive studies to achieve the local electric field in the silicon nano-electronic devices have on the individual 123Sb (spin -7/2) coherent quantum control of core, which was first mononuclear experiment achieved. The results obtained support the quantitative microscopic theoretical model, the nucleus reveals the electric-quadrupole interaction modulated how lattice strain caused by lead uniquely addressable coherent nuclear spin transition. 0.1 seconds, the spin dephasing time is several orders of magnitude longer than those required by the electrically driven electron spin coupling. These results indicate that the high spin quadrupole approved model of chaotic full electronic control, the strain sensor and the spin mix – quantum mechanical systems, integrated with controllable nuclei quantum dots may be extended based on the electron spin and the nuclear spin siliconPave the way for quantum computer, the computer does not need to operate the oscillating magnetic field. The results related to \”Coherent electrical control of a single high-spin nucleus in silicon\” was published in Nature.

Second, a single high-power coherent nuclei of the spin control

Third, the internal mechanism of Discussion

As can be seen from the foregoing description, a single coherent obtained purely electrical control of the nuclear spins very significant. In order to understand this phenomenon from the microscopic researchers to further explore the effects of the electric field in the end it is how the nuclear spin. EFG a static location means must be present in the core, which requires breaking the silicon crystal Td (tetrahedral type) Symmetry – single observation NER converted – by a nuclear quadrupole splitting apart fQ. Td symmetry by different partiesStrain and the electric field polarization atom destroyed. Experimental studies of known devices, large and uncharged donor atoms into the local lattice distortion, which is equivalent to four Si atoms move 0.2Å, and the polarization charge density (FIG. 4b, d) along the direction key. However, this has not destroyed Td symmetry. Si and Al at the different thermal expansion of the device is cooled to a low temperature due to the strain distribution, the finally obtained EFG. FIG quadrupole splitting space and Experimental Research fQ obtained to give a theoretical model are in good agreement to the predicted position of the body, the external electric field caused by the coupling with a strength calculation R14 = 1.7 × 1012m-1, the literature has also been quantitative support. This series of efforts to show that nuclear power is a real local resonance microscopic phenomena: the lattice strain brought nonzero EFG, by adjusting the applied electric field can be achieved in a single nuclear spin LQSE and NER.

In an interview, Professor Morello parables pool table to explain the importance of the use of electric control nuclear spins. . \”Magnetic resonance is like trying to move above a certain ball by lifting and shaking the entire pool table,\” he said: \”We can move the object ball, but will also move all the other balls.\” However, \”electricity resonance breakthrough is like being handed a real billiard stick, you can get the ball where you want. \” Professor Morello said:.\” this finding implies that we now have a pathway using a single atomic spins to construct quantum computers, without any oscillating magnetic field to operate them . \”\” Furthermore, we can also use these as nuclei extremely precise electric and magnetic field sensors, and [ 123] . \” Professor Andrea Morello, by Dr. Dr. Vincent Mourik they answer fundamental questions of quantum science Serwan Asaad. Source: Lee Henderson / UNSWAndrea Professor Morello long-term commitment to the development of solid-state devices for quantum computing. Team in August 2017 and the New South Wales state government and other partners, launched Australia\’s first quantum computing company Silicon Quantum Computing Pty LtdTo promote the development and commercialization of proprietary technology team. The team plans to develop a 10-qubit quantum prototype silicon integrated circuit in 2022, this will be the first step in the first silicon quantum computer built in the world. 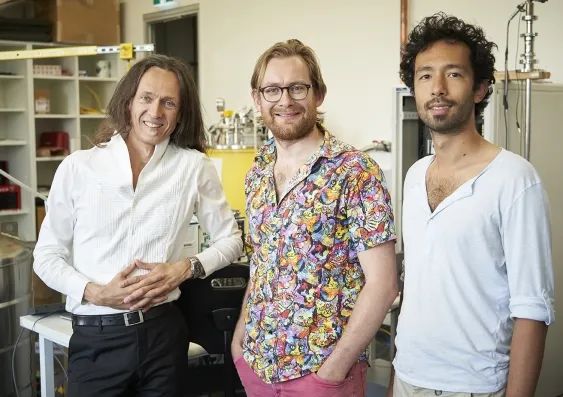 下一个：What Aerogels are? If there is no light matter, spend tip a \”cloud\”