\”Science\”: a record pace, the carbon dioxide is converted to ethylene!

The use of renewable energy to drive the electrochemical fixed gas, which was converted to value-added products, which is the conversion of CO into CO2 and hydrocarbon fuel and chemical raw material an attractive way. The success of this approach will depend on the continuous improvement of energy efficiency to minimize operating costs and increase depending on the current density to minimize the cost of capital. This will require catalysts to proton coupled electron transfer step is performed by promoting adsorption, coupling and hydrogenation. In these reactions, both water-based electrolyte as a proton source and as the ionically conductive medium. However, these gases are limited solubility in water, when gas molecules collide with its environment or reaction, resulting in the gas diffusion restricted. In an alkaline aqueous environment, CO2 diffusion length may be as low as tens of nanometers. Because the mass transfer reasons, limiting the capacity of the catalyst in the aqueous phase of the battery, the current density in the range of tens of milliamps per square centimeter. Design

of the fuel cell catalyst layer

in the gas phase electrolysis cell, the catalyst layer is deposited on the hydrophobic gas diffusion layer, the diffusion of gaseous reactants only a short distance to reach the surface of the electrically active catalyst site (FIG. 1A). Oxygen reduction reaction (ORR) shows that the fuel cell, the catalyst layer of the gas diffusion reactant mass transport become limiting step in the cathode. ORR in order to improve performance, the fuel cell catalyst layer is designed to be hydrophobic balance, to help drain the water and hydrophilic, in order to maintain a sufficient ionic conductivity. With different oxygen reduction reaction generated water, CO2 reduction reaction requires water as a proton source hydrocarbon production. Thus, the catalyst layer is hydrophilic, fully hydrated during the reaction. In this structure, CO2 electrochemical reaction at the reaction interface in gassed (FIG. 1B). When the gaseous reactants and the electrolyte coexist in electrically active sites of the catalyst quickly decays into the volume of the electrolyte, the high pH used in particular in the alkaline electrolyte. At high current densities, due to local generation of OH-, decay further increased. (PH 15 to <2 mM)。由于析氢是一种竞争性的反应，与CO2在相同的应用电位范围内的还原作用类似，催化剂暴露在CO2耗尽的电解液中的大部分表面积促进了不需要的H2生成(图1C)。 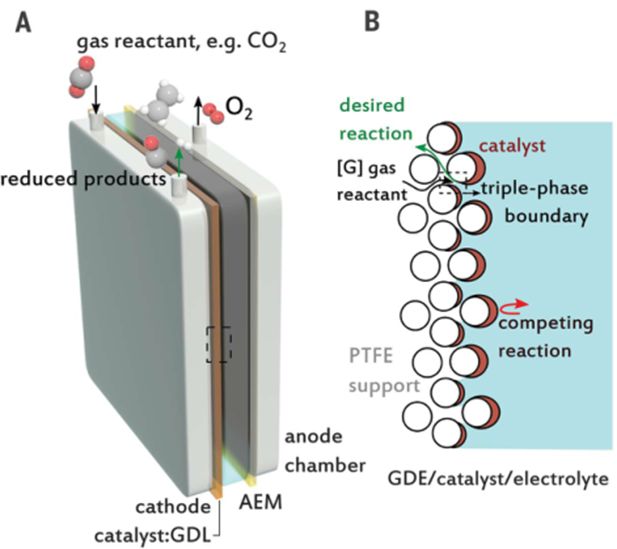 FIG. 1 (A) a schematic flow cell most of the catalyst contact with the electrolyte, wherein the carbon dioxide solubility limit by its effectiveness. The reaction gases via the gas back electrode facing the gas electrolyte diffusion into the catalyst material. anion exchange membrane (AEM) OH facilitate transfer from the cathode to the anode. GDL, the gas diffusion layer. (B) a hydrophobic carrier diffusion in the carrier gas [G] is deposited sodium salt (GDE). (C) gaseous reactants, water and ions and the active site coexistence determines the maximum volume of gas available current electrolysis. Limited the concentration of the reaction catalyst zone promotes reaction by-products, such as hydrogen evolution. (D) When the gas and electrolyte transport (water and ion source) decoupling, three phase reaction interface can be extended, so that all the electrons are involved in the desired electrochemical reaction. David Sinton University of Toronto and Edward H. Sargent and other researchers have proposed a mixed catalyst design, by decoupling gas, transporting electrons and ions of the CO2 and CO capable> current density area cm 2-1 A vapor-phase electrolysis effectively to produce a multi-carbon products. The research results entitled \”CO2 electrolysis to multicarbon products at activities greater than 1 Acm-2\” in the title, published in the top international journal \”Science\”. Here, the researchers used herein, a polymer layer from having hydrophobic and hydrophilic functions, can be assembled into domains having different form, thereby facilitating ion transport gas and metal surfaces routes: via the gas transmission promote side hydrophobic domains, resulting in extension of the gas diffusion, and absorption of water and ion transport is performed (FIG. 1D) by hydration of the hydrophilic domains. Thus, these three components (gaseous reactants, ions and electrons) together are in interfacial reaction catalytically active sites, increases the length of the submicron range from a few microns. 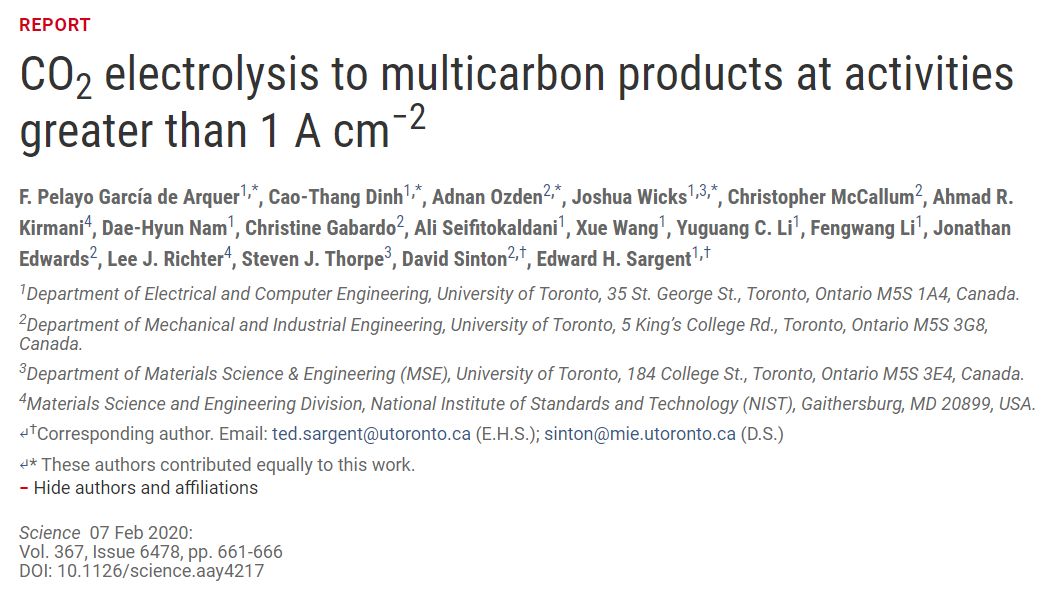 Researchers trying to enhance the transmission system through an experimental design. The researchers turned their attention to perfluorosulfonic acid (a PFSA) ion, which combination of hydrophobic and hydrophilic function and ion transport. Provided that they are controlled assembled into different layered hydrophobic and hydrophilic domains, will provide different means to promote gas transfer, a hydrophilic domain facilitates transport of water and ions (FIG. 2A) by a hydrophobic domain. PFSA ion, such as the Nafion,-SO3-containing (hydrophilic) and -CF2 (hydrophobic) group. Nafion is a widely used fuel cellThe binder and catalyst material film, has a strong structure – functional dependency. In a polar solvent. PFSA colloid-forming ions in a solvent exposed hydrophilic group -SO3-. When PFSA ion solution is coated on the surface of the metal catalyst, researchers expect -SO3- preferentially exposed polycrystalline metal surface hydrophilic, hydrophobic electrolyte to provide a continuous permeate channel (FIG. 2B) by -CF2 hydrophobic region.

Researchers designed a new catalyst, with gas – separating the electrolyte beyond the two-dimensional transmission catalyst. Ideally, such a reaction catalyst to maximize the three-phase interface on a three-dimensional configuration, it is possible to efficiently run in a higher current region. Researchers PTFE / Cu / ionomer (CIPH) of the gas diffusion layer supports the 3D Catalyst Preparation: ionomer bulk heterojunction (CIBH), which is cast of copper nanoparticles and PFSA mixed and injected together, form and a metal having a 3D shape (FIG. 3A) ionomer penetration path. Shows a cross-sectional SEM image of the catalyst in different layers CIBH (FIG. 3B). High-resolution TEM images using cryosections and energy dispersive X-ray spectroscopy elemental FIG obtained was further revealed a continuous and Cu nanoparticles (FIG. 3, C and D) from the present domain ionomer. Mer schematic metal catalyst from the heterojunction

a record rate of catalysis

Researchers first by adjusting the deposition conditions, and Cu: optimizing CIBH form ionomer blend ratio was found that the mass ratio of 4: 3 is the best of. With this ratio, the electrolytic solution in 7 M KOH and 50 cm3 min-1 CO2 flow rate, researchers have explored the effects of the thickness of the catalyst layer. EffectiveCIBH of the catalyst, is expected to increase as the current CO2RR catalyst loading is increased, until the length of the path from the gas permeation reaches a homopolymer phase diffusion length of the gaseous reactants. With increased catalyst loading and the respective thickness observed CO2RR total current monotonously increases, the load exceeds 3.33 mg cm-2 when 1 A cm-2 (5.7 μm thick), when the load reaches a higher saturation current density 1.32 A cm-2, and decreased energy efficiency (Figure 3E). In 7 M KOH electrolyte solution, the best products at different CIBH catalyst showed that the current density distribution, from 0.2 to 1.5 A cm-2, H2 generation rate was maintained at 10% or less. At the highest current operating conditions, the catalyst ethylene optimized for maximum yield of 65 to 75%, in the case where the cathode efficiency can be 46.3%, the peak bias current density was 1.34 A cm-2 (FIG. 3F). In thin flow cell for an optimal CIBH catalyst (no reference electrode, the smallest catholyte channels ≈ 3 mm, water is oxidized at the anode nickel foam), at 1.1 A cm-2 and no iR under compensation, energy efficiency of the whole battery of C2 + products is estimated at 20% (FIG. 3G). Current density portion

上一个：Who ranked the world\’s first chemist? What are you up to?