Polymer films are used in a variety of gas separation polymeric gas separation membrane permeability and selectivity generally negative correlation. A polymer film is designed primarily based on empirical observation, the discovery of new materials which can be separated to a specific gas is a limitation. Therefore, a new generation of synthetic polymers challenge is to design a gas separation membrane having both high permeability and selectivity of the material. Using chemical synthesis methods and test possible and potential polymer structure chemically modified very expensive and time consuming. Several theories have been developed methods and models to understand the diffusion and solubility of the polymer material, which can be more rational design of a new generation of materials. 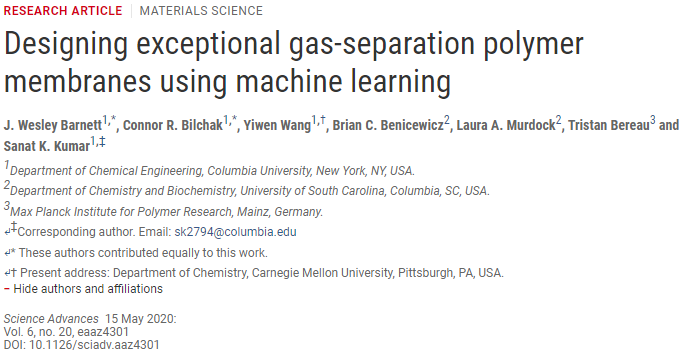 Recently, Professor Sanat K. Kumar joint team of University of South Carolina at Columbia University, and other researchers at the Max Planck on \”Science Advances\” describes a topology, hash-based polymer of repeating units of machine learning path ( ML) algorithms. The authors used about 700 species of six different polymers gas permeability of experimental data to predict more than 11,000 untested homopolymer gas separation behavior. To test the accuracy of the algorithm, two of the most promising synthetic polymer film of the prediction method is found to exceed the upper limit of the separation performance of CO2 / CH4. This technique uses a smaller ML experimental data sets were trained is a new means of polymer membrane design exploration.

On the fingerprinting used to digitally represent chemically linked repeating units in the polymer. In the group contribution method, all of the building blocks must be defined a priori and remains constant; is dynamic in nature fingerprinting, which can evolve to include a synthetic material. Fingerprinting also contemplated chemical connectivity between the different units. The authors used similar Daylight fingerprint algorithm implemented RDKit Each polymer into a binary \”fingerprint.\” This analysis of the various segments comprising a certain number of molecules bond topology based method, and then each segment is hashed to generate a binary fingerprints, which indicates a fingerprint of the molecule to be calculated.

Synthesis of the two polymers P432095 and P432092, and tested for their CO2 / CH4 transmission performance, in order to verify the experimental data ML. The polymer synthesized by the doctor blade to cast a thin film (≈30μm) from the solution, and using a constant volume / variable pressure testing experimental techniques. As predicted ML model, the polymer exceeds the upper limit of the gas Robeson 2008, and at the same permeability value, P432092 and P432095 selectivity were approximately 7 times and 5.5 times the upper limit. Also found to have relatively good agreement between the experimental data points and the prediction data points to each other, indicating that ML model may be used to identify the polymer untapped tools for predicting the separation of gases.

ML algorithms currently used only for testing of polymers have been synthesized. A better approach is to include a polymer architecture in the algorithm, and then applying \”synthetic be\” bound polymer as a means of selection for further study. This method for predicting having bondedThe new value into the polymer is very important.