According to foreign media reports, recently, scientists from the National University of Singapore have discovered a new use cotton waste – they made Aerogels . It is understood that this ultra-clean materials that can be used to cool water bottles while the wound to stop bleeding. By the Hai Minh Duong, associate professor and professor Phan-Thien Nhan co-led the research team extracted from the cotton fiber textile waste out, and then through a fast, low-cost, green way to be made into an airgel. 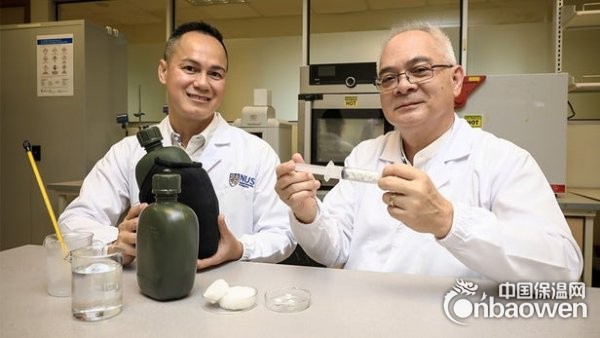 with airgel as obtained by other methods, they are made of an airgel Duong only very light but also have a high porosity, high absorption and low thermal conductivity. Aerogels with the other difference is that the airgel made by the cotton fertilizer production cost is very low and fast – about 20 times that of conventional manufacture. Scientists manufactured for military bottle containing a layer of thermal insulation jacket airgel cotton and other fabrics used in one other experiment. When it is placed on a bottle containing the ice slurry, which makes the inside temperature of the liquid remains at 0.1 to 1.0 ° C over 4 hours. Although this sounds similar performance with thermos on the market, but the latter more weight to weight, cost is also higher. In addition, researchers also prepared for such battlefield haemostatic airgel is capable of absorbing capsules. After the capsule is injected into the wound and will be absorbed by expanding the blood pressure is then applied to the wound to stop the bleeding from the inside of the turn. Duong describes that each cotton airgel beads may be expanded in 4.5 seconds to 16 times the original size – than the active fiber sponge is much larger, much faster absorption rate – this same time, it can maintain the integrity of the structure. Now, the university is looking for partners hope to commercialize the technology.