SEM can do that play? Graphene to \”bath\” to achieve atomic cleanliness

In addition to electron microscopy is used to take pictures, but also to do more cool do you want? Germany Erlangen – Nuremberg University Professor ErdmannSpiecker and his colleagues recently demonstrated a new play electric mirrors. By adding them in a scanning electron microscope (SEM) and transmission electron microscopy (TEM) apparatus piezoelectric arm to achieve a surface of the graphene film in situ cleaning, the cleanliness of its atomic level . In addition, the authors adsorbed graphene grown on a clean surface with a specific surface of the graphene. 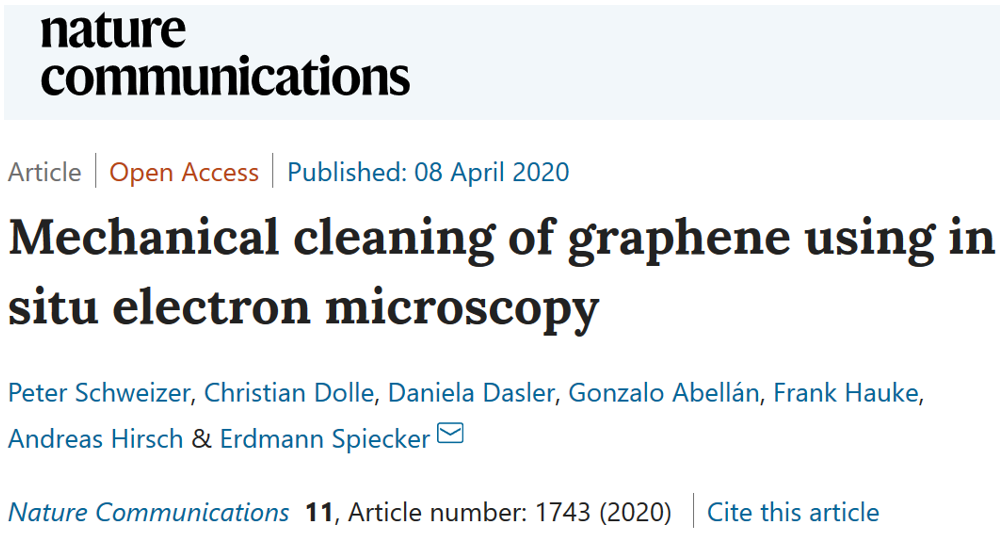 Cleaning using graphene and graphene surface dust weak force characteristics, such as a cleaning process which mop (Figure 1a). On the front end to join two SEM apparatus is connected with a piezoelectric tungsten probe arm (FIG. 1b). A probe up and down, is accessible from both above and graphene film, and moved over the surface. When cleaning, first carefully probe the graphene film in light contact, and then move in a plane. Since the dust between the graphene weaker than the urging force acting between the graphene layer, so that the probe can be adsorbed on dust from the release surface of the graphene, whereby the graphene cleaning (FIG. 1c, d).

Cleaning graphene film may be observed in real time by SEM. SEM pictures showed that the untreated surface of the graphene attached to a large elongated dust particles (FIG. 2a). Cleanliness level achieved atom (video and FIG. 2b-h) by the movement of the probe on the graphene surface, without damaging the graphene may be film premise. In addition to an outer SEM, TEM may likewise graphene \”bath.\”

the clean surface of the graphene can be used as a two-dimensional study of the growth behavior of the material internet. For example, the intention of the authors introduced a clean surface of the graphene Cu (II) – tetraphenylporphyrin (CuTPP) molecules, and by electron beam irradiation induced diffusion of these molecules at the surface (FIG. 3a). Molecules containing a benzene ring CuTPP gathered after diffusion with the energy of the electron beam crosslinking and gradually formed a monolayer having a defect in graphene network (FIG. 3b-d). by regulating the time and the crosslinking density of the surface adsorbing molecule, it can be synthesized in situ multi-graphene.

inspiration comes from I do not know whether this work the authors of a particular sweep the courtyard. For more information (e.g., the graphene surface recontamination kinetics, etc.) See text: https: //www.nature.com/articles/s41467-020-15255-3