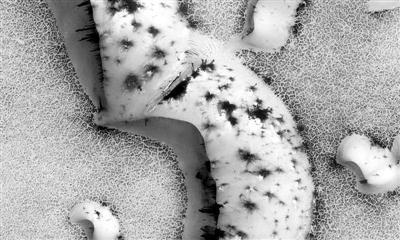 polar ice caps on Mars is a combination of water ice and frozen carbon dioxide. Source: physicist organizational network of Science and Technology Daily Beijing July 16 (Reporter Liu Xia) According to physicist organizational network reported on the 15th, people have dreamed of reshaping the Martian climate, making it suitable for human habitation. Scientists have proposed various methods, but can not be realized. Now, from Harvard University, Jet Propulsion Laboratory and the University of Edinburgh researchers have proposed a new method carried out in the local: add a thin layer of silica airgel on the Martian surface area. By modeling and experimental studies have demonstrated that a silica airgel can be 2-3 cm thick for sufficient visible light transmission of photosynthesis, blocking harmful ultraviolet radiation, which will permanently at elevated temperatures above the melting point of water, and, to achieve all without any internal heat source. Harvard University Environmental Science and Engineering Assistant Professor Robin Wordsworth said: \”This makes regional approach to Mars livable than change the whole atmosphere of Mars is easier to implement, and use of existing materials and technologies.\” And on the earth by the different polar ice caps made of ice-cold water, polar ice caps on Mars is a combination of water ice and frozen carbon dioxide. Frozen carbon dioxide may allow sunlight to penetrate, while trapping heat. In summer, this solid state greenhouse effect will produce some warmth in ice, is expected to make water into a liquid. Inspired by this natural phenomenon, Wordsworth said:. \”We began to consider this solid state greenhouse effect, the problem is to find a material that can minimize thermal conductivity, but can still transmit as much light as\” they eyeing the silica airgel – one kind of heat insulating performance is excellent lightweight solid amorphous nanoporous material, having a porosity of up to 80% -99.8%. Experimental simulation using the surface of Mars, researchers demonstrated a thin layer of silica airgel can raise the average temperature of Mars in latitude to a temperature similar to the Earth. Wordsworth said that this material can be used in the construction of the biosphere on Mars habitable dome and even self-sufficiency. Next, they plan on regional climate similar to Mars on Earth – such as dry valleys of Antarctica or Chile and other testing. Laura Kober\’s Jet Propulsion Laboratory, said: \”Mars is the most desirable in the solar system except Earth living planet, but its environment is still hostile to most life to survive, to create livable island this approach will enable us to canControl and scalable way to transform Mars. \”