Spider teach you how to prepare high strength hydrogels

We\’ve all seen cobwebs, spider web spider silk is formed, no matter what flies, it is difficult to escape once hit. According to reports, the composition of spider web silk is five times, it has been considered the production of steel armor US military material. Natural spider silk is a structure formed based on natural polypeptide, its excellent mechanical properties due to the spatial arrangement of amino acids within the polypeptide, are arranged by a hydrophobic amino acid residue (i.e., alanine) formed mainly of a high hydrogen bond β- order folded structure. Around these β- sheet structure is a semi-amorphous, glycine-rich region of the arrangement, a special arrangement (spatial component) extending in height so that spider silk exhibits incredible toughness – Tensile strength between 0.88-1.5 GPa, elongation at break of 21-27%. This incredible potential mechanical aroused great interest in synthetic materials are widely used polypeptide (such as hydrogels, films and fibers) in, including tissue engineering and drug delivery. In the synthesis of β- folded to form a peptide, the synthesis process or both molecules need to be carefully considered. The method of transfer by conventional solid state synthesis and microbial synthesis gene peptides are produced, but the former requires a keen awareness of the genes derived from the peptide sequence, which is limited to the preparation of short-chain peptides. N- carboxy anhydride ring the ring-opening polymerization (NCA ROP) is a more inexpensive and simple method for the synthesis of large quantities of the polypeptide, have greater potential for long-chain polypeptides. When designing polypeptide β- formed by folding, hydrophobic associations control is essential, but it is difficult to achieve in a laboratory. This often results in ambiguous, uncontrolled and poorly soluble aggregates greatly affect the formed structure (e.g., bulk hydrogel) mechanical potential. In general, hydrophobic residues are usually used in an attempt not controlled by the associative and non aggregates are introduced to ease the formation of a high proportion of hydrophilic component polypeptide, incorporated hydrogel employed in subsequent peptide grafting- to law, but because of the destruction of hydrophobic association, join them extremely detrimental to the mechanical potential polypeptide. Natural spider silk module is formed using β-alanine in the natural silk folded fiber production process, which involves changes in the particular environment to promote the formation of β fold. However, β-alanine formed folded at a low molecular weight (small block), but the high molecular weight (large block) is formed α helix. In this case, the University of Melbourne, Australia Professor Greg G. Qiao Task Force reportIt reported a simple way by creating localized β folding zone spider silk to simulate the bulk hydrogel formed have superior mechanical properties. Amino side chain is introduced in the polymer backbone and crystal gum hydrogel to boot NCA ROP, such that these fold domains using β nanocrystals enables effective utilization of these conformations. This method is an average of up to 79 repeat units of a long chain Valine graft, and further folded to form a continuous β nanocrystalline network . The hydrogel obtained experimentally compressive strength increased by 3 orders of magnitude, to 9.9 MPa, compressive strength cryogel increased two orders of magnitude, to 30 MPa. Furthermore, the nature of these networks can be easily adjusted glycine, poly (glycine-valine -r-) graft such that the compressibility of from 40% to 60%, without significant loss of toughness. The network display improved corrosion resistance to acids, alkalis, and protein denaturing agents within 28 days. This simple method provides a powerful tool for preparing β unique hybrid networks with the folded, and further for adjusting the other mechanical properties of materials for biomedical science and functional hydrogel and degradation of performance. In related work \”Spider-silk inspired polymeric networks by harnessing the mechanical potential of β-sheets through network guided assembly\” was published in the Nature Communications on. 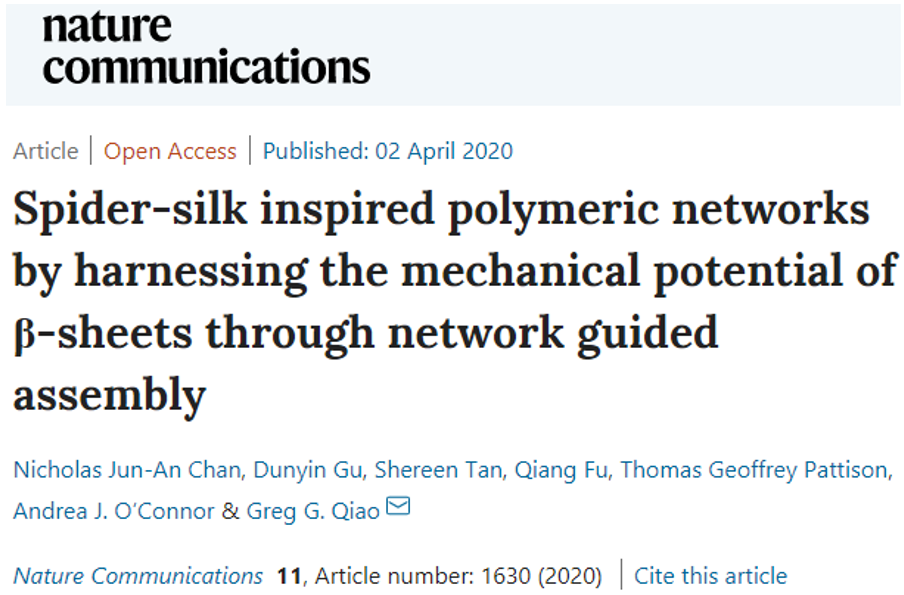 aNCA root conversion of monomersAccording integral residual monomer and solvent peaks NCA method than that specified calibration curve, using the 1H NMR measurement. Plus or minus standard deviation (n = 3) based. b The average DP is the average of each group -NH2 graft Val network backbone repeating units, the initial molar conversion between the network and the NCA Val -NH2 group than estimated (assuming the whole network, and polymerization initiation efficiency the same rate).

上一个：Liu Fu Team: Series made progress in the field of anticoagulation self dialyzer