matchless auto News According to foreign media reports, in order to meet future demand for electrification, a need to develop new battery technology, one option is a lithium-sulfur battery, compared with the lithium ion battery, in theory, such a battery energy density 5 times higher. Recently, Swedish Chalmers University of Technology (Chalmers University of Technology) researchers with the help of sponges graphene (graphene sponge), the use of catholyte, won the breakthrough in the development of such cells. Researchers very novel idea, a porous one kind of a reduced graphene oxide made of sponge-like airgel, as individual electrodes of the battery, so that better use of sulfur to improve the utilization. Traditional cell consists of four parts. First, there are two support electrode active material covered, i.e., anode and a cathode; an electrolyte therebetween, usually liquid, that allows ions transfer back and forth; The fourth part is a separator, as a physical barrier, while preventing the contact of both electrodes allows ion transfer. Previously, researchers have tried to combine the cathode and the electrolyte, a \”catholyte.\” The concept helps to reduce battery weight, while the charge faster, stronger power. Now, thanks to graphene aerogels have been developed, the concept has been proven to be effective and feasible, and good prospects. First, researchers injected graphene thin layer of porous airgel in a standard battery box. Principal Investigator Department of Physics, Chalmers University of Technology and the present study Carmen Cavallo said: \”airgel is a type of long thin cylinder, it will be the same as the cut salami cut into thin slices, then slice squeezed into the battery. then let one sulfur-rich solution, i.e. catholyte added to the cell. the porous airgel as a support, would like a sponge and the solution. \” 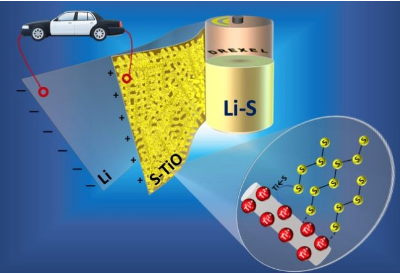 In order to play its role catholyte electrolyte separator is also added to the catholyte portion, which maximizes the sulfur content of the cell. Currently, most commercial lithium ion batteries are batteries , but the development of such cells close to the limit, in order to meet higher demands, search for new chemical processes become more important, while the lithium-sulfur battery has several advantages, such as higher energy density. currently, the best on the market lithium the efficiency of ion battery is 300 Wh / kg, in theory, up to 350 / kg. theoretically, a lithium-sulfur battery energy density of about 1000 to 1500 when W / kg. Chalmers University of Physics the professor and research-driven person Aleksandar Matic, said: \”In addition, sulfur is very cheap, abundant, and more environmentally friendly. In addition, lithium ion batteries generally harmful to the environment comprising fluorine, and lithium-sulfur battery does not. \”So far, the problem is that lithium-sulfur batteries is not stable enough, resulting in a short cycle life. But researchers at Chalmers University of Technology when testing new prototype battery and found a new battery after 350 cycles, remained 85% of capacity the new design avoids the two major problems of degradation lithium sulfur, a sulfur dissolved in the electrolyte is lost, the other is a sulfur molecules migrate from the cathode to \”shuttle\” effect of the anode. in this design, such implications have been greatly reduced, however, the researchers pointed out that the technology to take full advantage of the market potential is still a long way to go .Aleksandar Matic said:. \”Because of this mode of production differs from most normal cells battery, it is also necessary to develop new production processes to commercialize the battery. \”

下一个：Airgel felt embodied in the pipe insulation applications worth