Photochromic materials has become an important molecular Advanced Photon applications, including fluorescence imaging, intelligent lens, an optical data storage and security. Current research focus in this area is to develop new photochromic molecules and photochromic control the behavior of these materials to meet different standards for photovoltaic applications. However, it may be photochromic coloring material (or may be colored photochromic steady state refers to the ratio of light absorbance in the initial state A∞ / A0) and adjusting the rate colored little attention. So far, by introducing the photochromic electron donor or acceptor molecule substituents, progress has been made in regulating the rate of coloring and coloring. However, the preparation of photochromic material generally having a constant color and rate of color development in the same light conditions. Further, the adjustment of the photochromic behavior often requires a complicated chemical synthesis and purification process complicated, which makes the adjustment of the photochromic behavior inconvenient and inefficient. Recently, Nanjing University of Posts and Telecommunications Professor Huang Qiang and academicians on \” Science Advances \” published an article entitled \”On-demand regulation of photochromic behavior through various counterions for high-level security printing\” the article reported their latest discoveries in photochromic materials. By changing their crystal violet lactone salicylaldehyde hydrazine (CVLSH) zinc complex counter ion, to achieve the coloring speed and coloring photochromic molecules demand fine control. Complexes of zinc controllable photochromic properties, preparation intelligent photochromic film, and the successful implementation of multi-level security printing. Their strategy is to build a light-responsive material paves the way for photochromic behavior of this material can be controlled as needed. 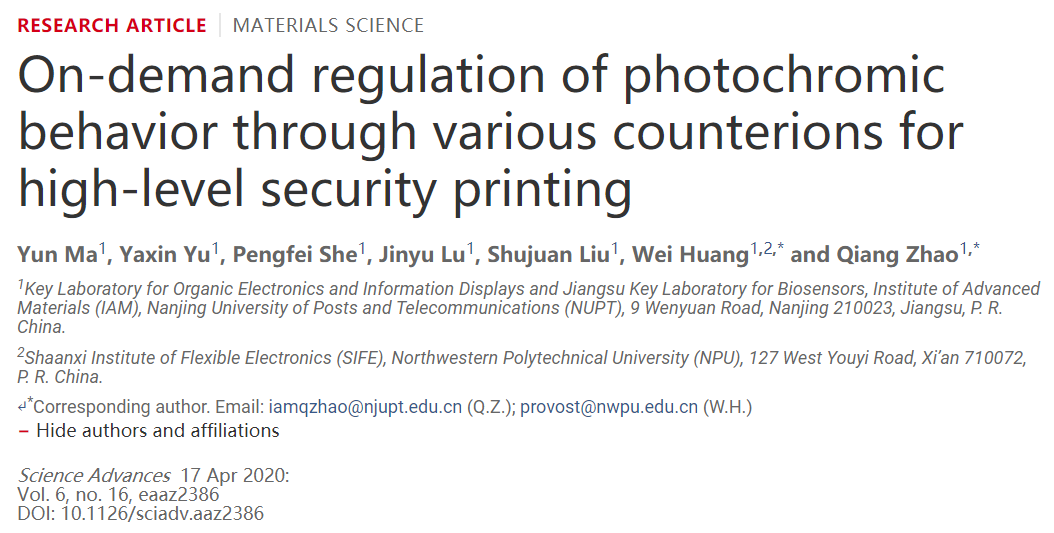 1. Counterion influence on the photochromic behavior of the

Since ultraviolet radiation is promoted salicylal isomerization from one type to the enol form, CVLSH zinc complex by ultraviolet light in CH2Cl2 irradiating the formation of an open loop state, exhibit photochromic behavior. For example, CVLSH-Zn-Br colorless solution gradually turned dark blue in the continuous irradiation of 365nm, as shown in FIG. In the case without the light source, when the complex is heated, closed back zinc complexLoop state, the solution becomes colorless. Thus, CVLSH zinc complex having a reversible photochromic behavior.

Considering the different counterions have different effects on the charge density of the metal center, which may lead to different photochromic properties. Thus, the effect of different counterions discoloration properties CVLSH-Zn-X (X = Br, Cl, NO3, CF3SO3, CH3COO) of the photo. The photochromic activated zinc complex with alkaline counterion decreases significantly improved. CVLSH-Zn-Br photochromic properties up to 112.3, while CVLSH-Zn-CH3COO about 1.0. Counter-trend may reflect basic ion induced effects. Since the ring-opening states have significant charge separation characteristics inducing effect will lead to the metal center of open-loop stable isomers. As counterion basic, less acidic, zinc effects induced increase causes the center of a stable open loop state.

and reversibility using the Zn2 + CVLSH metal ligand coordination bond, to achieve the dynamic control of the photochromic behavior. Since the fluorine ions and zinc ions has a strong binding affinity of the added fluoride ions will dissociate and Zn2 + coordination bond occurs between CVLSH derivative. Thus, CVLSH may cooperate to form a new photochromic complexes having different coloration rate (FIG. 4B) with other zinc salts. For example, CVLSH-Zn-CF3SO3 under UV irradiation with a first color ratio 0.00216s-1, but will form a precipitate when treated with ZnF2 tetrabutylammonium fluoride. Subsequently, ZnCl2 to the ligand and form a ligand CVSLH CVLSH-Zn-Cl, a clear color development rate (0.01122s-1) (FIG. 4B).

CVLSH-Zn-X complexes significant adjustability in the photochromic rate shows its enormous potential in a multistage CRYPTOGRAPHY. OF construct a color mode information storing microarray according to the ASCII binary code, colorless and blue represent 0 and 1. Initially, with different zinc salts CVLSH in the cuvette is colorless; therefore, according to ASCII binary code, \”00000000\” is translated into a null character. Subsequently, when the cuvette is exposed to UV light for 10 s, rapid color change from colorless to blue, but other colors cuvette maintained. Thus, as shown in FIG. 4D, the decoded information is \”AAA\”, and then irradiated for 50s these cuvettes, and then to its closed CVLSH-Zn-NO3 open loop, so that as shown on FIG. 4D binary code information changed to \”IAM\”. When the irradiation time was extended to 200s, the new \”KAO\” information is decrypted. For these micro-array mode, different information is decrypted at different ultraviolet irradiation time; therefore, only those who know the correct encryption algorithm authorized and accurate irradiation time individuals can gain access to confidential information. Thus, because of significant dynamic adjustable photochromic properties, the binary-coded security system has been more improved.

introducing strongly basic counterion photochromic is significantly reduced. Accordingly, different zinc salts and CVLSH ligand may be a photochromic film prepared according to different needs intelligent light transmittance. Figure 5Shown, when the smart photochromic film exposed to solar simulated light, the different counter-ions-containing polymer film of the photochromic material from a colorless to bluish or even clear dark blue. The light transmittance of the photochromic film were 77%, 58%, 45% and 20%, corresponding to CVLSH-Zn-CF3SO3, CVLSH-Zn-NO3, CVLSH-Zn-Cl and CVLSH-Zn-Br complex. This demand control characteristics of the photochromic film has a transmittance in a wide range of applications or smart glass window. In addition, also containing CVLSH-Zn-Br polyethylene glycol – propylene – polyethylene glycol (PEG-PPG-PEG) films were rewritable information recording experiments. They printed pattern on the film is irradiated with ultraviolet rays through a photomask. 365nm after UV irradiation for 2 minutes, exposed areas turned blue, while the unexposed regions remain colorless. For 1 minute to completely erase the printing deg.] C in air of 70.

using zinc discoloration properties CVLSH-Zn-X photoinduced regulate, developed a security paper having practical value. 6, the security paper consists of three layers. First, on parchment coated PEG-PPG-PEG as a passivation layer. Second, as the CVLSH layer data on a first recording medium coated. Finally, the PEG-PPG-PEG as a protective layer coating on the surface. Next, an inkjet printer and an aqueous solution of a commercially available zinc as an ink to the recording confidential information. Initially, the printed text is invisible under ambient light. 365nm ultraviolet irradiation after 1min, appears hidden information visible. By heating the sheet for 1 minute information is hidden again rapidly at 70 ℃; or, under ambient conditions, the information gradually disappeared after 1 hour. 6C, the cycle can be repeated at least 15 times, but no apparent loss of contrast, indicating that the potential of the proposed security papers for encryption and decryption of information.

In addition, using different zinc salt as an ink, to achieve higher security information protection. For example, the aqueous ink ZnBr2, Zn (NO3) 2 and Zn (CF3SO3) 2 as a security recorded information. 6D, the information recorded in the natural visible light is invisible. However, when the sheet exposed to UV light for 10 seconds, the \”Nanjing\” characters would clearly apparent. After the irradiation of more than 30 seconds, and the emergence of two additional \”university\”, which becomes the decrypted information \”Nanjing University\”, and then, when the ultraviolet irradiation time was extended to 200 seconds, the naked eye can see the \”Posts and Telecommunications\” new characters, therefore, the information disclosed has become the \”Nanjing University of Posts and Telecommunications\”, using different UV irradiation time to read different information.