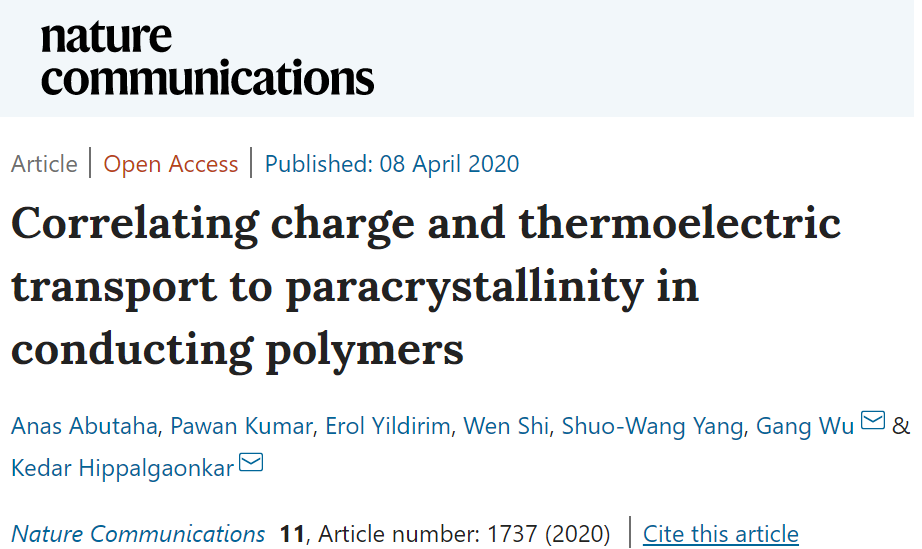 degree of crystallinity (g) is used to indicate the proportion of area occupied by the polymer crystallinity, crystallinity of the polymer in a wide range of variation, typically from 30% to 85%. The same material, generally the higher the degree of crystallinity, the more regular arrangement of molecular chains, it is necessary to destroy a higher temperature, so the higher melting point. Confuse the basic understanding of the conductive polymer in the charge transport from different forms obtained by different processing methods. The conductive polymer and the known relationship of the charge transport super crystallinity showed that the higher the g induce electron band gap of the material more states, thereby limiting the charge-transporting conducting polymers. The electronic state is displayed in the shape of a Gaussian distribution of energy in the room, its width (w) is defined as a high energy barrier. Although some of the charges have been established transmission model based on Gaussian DOS, but the charge carriers in the energy dependence of the scattering has been ignored. Energy conducting polymers disorder is caused by many factors position disorder, dynamic effects, such as polarization and polarization effects. However, they studied because organic systems varies contribution to the total energy of disorder. Based on this, Kedar Hippalgaonkar Nanyang Technological University and Singapore Technologies Research Service, Gang Wu (co-author) Coverage of the relationship between the charge transport in conducting polymers, electronic density of states and scattering parameters, in order to deepen understand this issue. Density functional theory (DFT) and molecular dynamics simulations (MD) study (TB) model of two-dimensional (2D) tightly bound, the density of states confirmed traces of a Gaussian distribution. Further, with the Boltzmann transport equation (a BTE), charge transport can be found scattering parameters (r) and an effective density of states understood. Experimental Model and transport properties of various conductive polymers herein are in good agreement, the scattering parameters affect conductivity, the carrier mobility and the Seebeck coefficient, the effective density of states only affect conductivity. The findings facilitate a basic understanding of the electrically conductive charge transporting polymer, thereby further improving their performance in electronic applications.

Since the electronic coupling (inter-chain, π-π) between the polymer backbone dominate the transmission characteristics of the actual macro-polymer system. Thus, g w impact on the more relevant in this study in the direction between the chains. The researchers explored the prototype of conductive polymers (3-hexyl thiophene) (of P3HT) at different values ​​of gElectronic band structure. In order to determine the electronic structure of P3HT, perfect crystal (g = 0%) were intensive DFT calculations. Since the DFT simulation with realistic structure of the conductive polymer intrinsic disorder of the challenges of the time, the researchers established the 2D TB model to simulate the behavior of a particular value of g bulk polymer. For spacing between the chains having a random sample real probability distribution function (PDF), and h were calculated average value and a parameter between t jump within the chain and chain. 2D TB model well reproduced DFT band dispersion, thereby forming a P3HT perfect crystals possible of the higher g values ​​P3HT 2D TB further calculation.

In order to understand the impact of a quasi-crystal of the electronic structure, the researchers used MD simulation generated different P3HT configuration, a position to introduce more confusion. The study found that all of these configurations can make best suited PDF Gumbel having different values ​​of w (proportional g) distribution. Figure 2a shows a distance between g = 7.93% of the chain PDF. As other studies considered, symmetrical Gaussian PDF is not a good representation. P3HT in order to study the electronic structure within a wider range (0-20%), researchers model to 2D TB microcrystalline 100 π-π stacking of chains, each chain having the direction along the chain 150 bits point. Figure 2b shows an electron different DOS values ​​g tail. DOS 2D TB tail obtained from a Gaussian model can be fitted, with which the value of g w increases exponentially. Thus, the tail can be seen that the electronic DOS well represented by a Gaussian distribution, and may be, for example, experimental measurements g related to its width.

Next, a detailed study of researchers relationship between the three prototypes conductive polymer PEDOT, between the S and σ P3HT and the PBTTT. The study found that when r = 0.5, the polymer-based PEDOT is the best model, and in the case of r = 1.5, the model deviates significantly from the experimental observations. PEDOT-based polymer obtainedR unique value, because of the form of linear chains containing PEDOT EDOT monomer, but lacks the side chain of the backbone to promote the rigidity, and therefore more chain vibrations (phonons) will be present in the polymer in a similar PEDOT. In addition, of P3HT and PBTTT structure with additional monomers having unique side chain, by promoting skeletal arranged in a 2D plane, contributes to enhance electron coupling π-π stacking direction. Found, P3HT and PBTTT of r = 1.5, indicated that the main mechanism of scattering is determined by the ionization of the counterion. Meanwhile, discussion will expand to occupy the Gaussian traces DOS carrier charge mobility (μ). Researchers have their field effect transistor (FET) Mobility (μFET) and experimental measurements associated g. Found, μFET did not show any significant dependence on g, and is generally considered the molecular order can enhance μFET the opposite. This indicates that depends only on the degree of polymerization μFET; and saturated with increasing molecular weight, μFET will increase.

As described above, by solving the complete OF Boltzmann transport equation, provides a common framework for understanding the conductive polymer in the charge transport. Computing the DFT and MD TB model suggests that in the conductive polymer, the DOS traces can be well described by a Gaussian distribution, with a width which increases exponentially the amount of quasicrystals. In addition, the frame also well explain the experimental observations and Hall field effect movement of such materials. This study reveals the basic physical properties of the conductive polymer in the charge transport, will help design better conductive polymer having the desired functional in many electronic applications. References: Correlating charge and thermoelectric transport to paracrystallinity in conducting polymers Nature Communications, 2020, DOI:. 10.1038 / s41467-020-15399-2.

下一个：How to make a drop of water suspended in the water?