Lighting consumes annually about 20% of the civilian power, of which 40% is consumed by the incandescent inefficient. Faced with an increasingly serious energy crisis, scientists are trying to develop efficient lighting modes such as light-emitting devices (LED) and so on. In the LED, the emitter plays an important role in the device. However, an LED-based fluorescent material of the internal quantum efficiency (the IQE) only 25% (the number of singlet excitons and triplet excitons ratio of 1: 3). Therefore, most of the energy is wasted, the development of more efficient emitter significant energy-saving significance. Recently, very collected triplet and singlet excitons by thermally activated delayed fluorescence (TADF) at room temperature phosphorescence (RTP) transmitting, to achieve 100% IQE. For phosphorescent emitters, the common metal complex-based phosphorescent material because of its high cost, toxicity, instability, etc., are often limited varieties. In contrast, there is no pure organic RTP these shortcomings emitter is attracting more and more interest. However, since the RTP purely organic intersystem crossing (ISC) forbidden, so rarely observed in the organic phosphorescent emitter at room temperature. Therefore, how to promote formation and increased from the ISC S0 T1 to the development of efficient radiative relaxation is critical RTP long organic molecules. Recently, the Institute of Chemistry Peng Qian researcher and Don Tadahiro Fellow South China University of Technology, Professor Zhao ancestral gold in \”Nature Communications\” published an article entitled \”Tuning molecular emission of organic emitters from fluorescence to phosphorescence through push-pull electronic effects\” of the article, a simple substituents changes, free of heavy metals and synthesis of a series of metal-carbonyl light, from the phosphor to achieve a tunable phosphorescent emitter molecules. All molecules are in solution and solid emits blue fluorescence. After removal of the excitation source, fluoride phosphorescent phosphor showed significant. Carbazole synthesized in the laboratory because of the presence of molecules isomers, as compared with commercially purchased molecules, exhibit great differences in life. Between the singlet and triplet energy gap smaller and lower restructuring can help enhance inter-crossing, thereby promoting radiation from the triplet state to the ground state of the process. They fluorinated emitter is a light emitting layer,Preparation of blue and white organic electroluminescent device.

TCz-F, TCz-H and TCz-OH structure as shown in FIG. Since the electron acceptance fluoro group, TCz-F electrons readily transfer to the carbazole ring-difluorophenyl. When the electron-donating substituent to (D) group (-OH), resulting molecule (TCz-OH) photophysical properties TCz-F TCz-H, and a greater difference compared. Due to the great steric hindrance adjacent carbazole unit, all molecules have a twisted conformation. TCz-F due to its lower twisted structure exhibits than TCz-H TCz-OH and better conjugation. On the other hand, these structures will prevent distortion due to inter-molecular interactions emit strong self-quenching in the crystalline state.

carbazole commercially available (Cz-Cm) in the [f] indole, carbazole and synthesized in the laboratory (Cz-lab) compared to the photoluminescence (PL ) showing a high discoloration. TCz-F-Cm, TCz-H-Cm TCz-OH-Cm, and a THF solution of 330 nm excited fluorescence in the blue light generated nm, 405 nm and 390 nm at 420, the quantum yield was 16.3%, respectively, 9.0% and 13.5%. However, in THF, with the water content gradually increased to 60%, since the inner twisted intramolecular charge transfer (TICT) effect, the emission intensity TCz-F-Cm is reduced, accompanied by red from 423 nm to 438 nm of shift. All emission lifetime in the nanosecond range, exhibits fluorescence emission properties of the light. Compared with the emitter electrode based on Cz-Cm, TCz-F-lab TCz-H-lab and in the solid state and solution exhibited bluer emission, Cz isomer showed little effect on the fluorescence efficiency. TCz-F-Cm crystalline powder that emits at 365 nm ultraviolet light irradiation blue fluorescence (FIG. 2B), after removal of the light source 2.0 s, still distinguish the yellow emission, showed TCz-F-Cm is a super long afterglow material with RTP. TCz-F-Lab appear blue and green fluorescent yellow phosphor before and after the excitation source turned off, much shorter than the persistence TCz-F-Cm (FIG. 2c, d). TCz-F-Cm, TCz-H-Cm, TCz-F-Lab and phosphorescence quantum yield TCz-H-Lab is respectively 7.4%, 4.6%, 0.8% and 0.7%. These results indicate that, although Cz-Cm isomers can significantly improve the emission efficiency and extend the life of the RTP RTP, but different emission behavior of the emitter Cz function mainly by its effect in various electronic push-pull system is controlled. 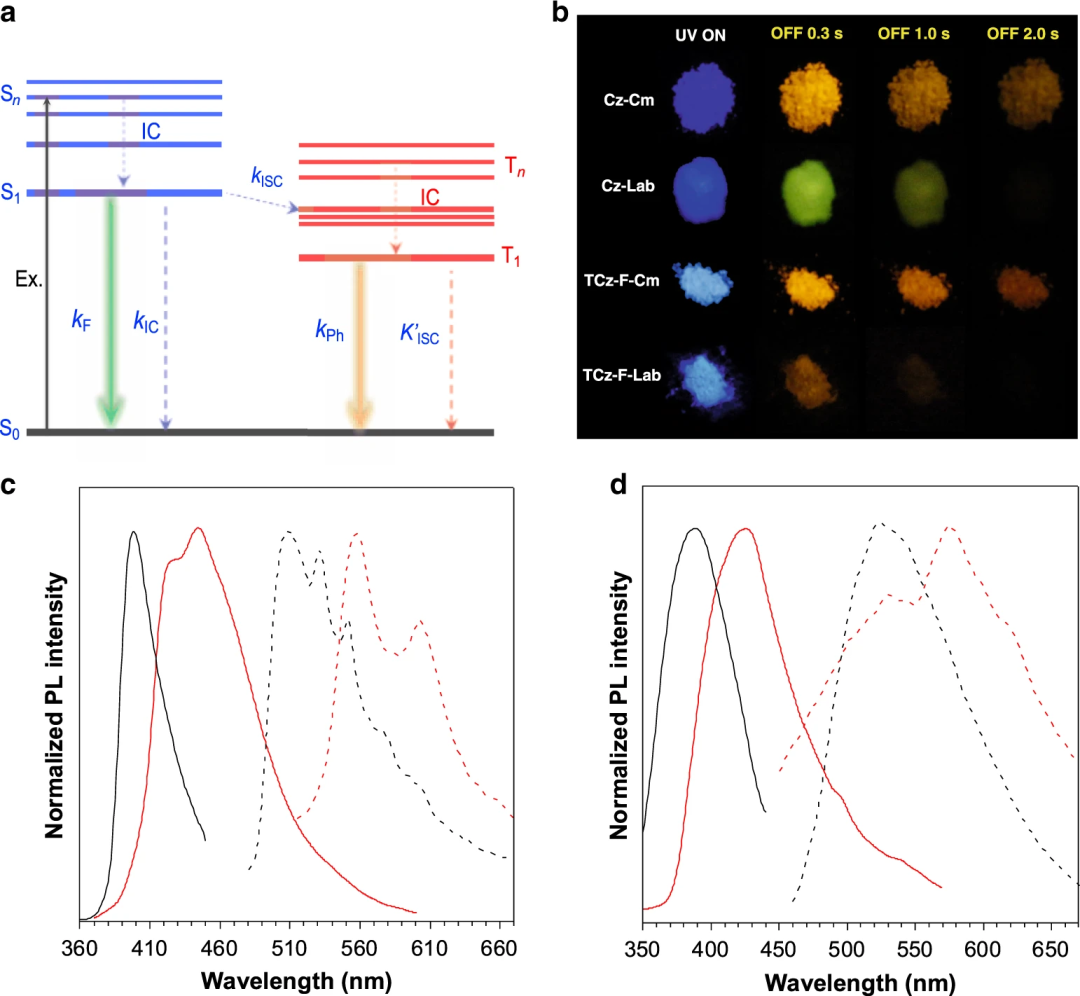 They TCz-F-Cm as an example, it is studied the optical properties in the crystal. Preparation of a rod-shaped crystallites emitted intense blue laser light irradiation at 375nm. When the laser light source is placed at a distance (D) at a distance from the rod tip 6.5,12.2,21.6,25.9,32.5,38.7 left and 49.4μm observed a strong blue emission edge. Left edge PL intensity with increasing distance from the edge to the point of excitation is gradually decreased (Figure 3b). No crystallites phosphorescence clearly observed, as triplet excitons is easily transferred to the surface of crystallites or crystal defects acting inactivated. The curve of the ratio of the distance D of the tip of the PL intensity at 415 nm, optical loss coefficient calculated ([alpha]) value as low as 0.031 dBμm-1, the micro-organic crystal rod produced show good optical performance.

They use TCz-F-Cm produced phosphorescent electroluminescent (EL) device (FIG. 4). To reduce the impact bimolecular quenching, such as triplet – triplet annihilation, TCz-F-Cm is doped at low concentrations (of respectively 3,6 and 10 wt%) at a high triplet energy of the host DPEPO ( bis [2 – ((oxo) diphenylphosphino) phenyl] ether, 3.00 eV) in the. Meanwhile, the use of 9,9 \’- (1,3-phenylene) bis 9H- carbazole (mCP, 2.90 eV) and DPEPO as an exciton blocking layer, to avoid the generation of excitons in the structure. EL device is turned on at 4.6-4.8 V, the deep blue emission peak at 420 nm, and at 580nmOrange detected peak. As the current density increases, the orange emission peaks become stronger. For devices I, at a current density of 3.6mA cm 2-, may be generated as CIE coordinates (0.357,0.317) emitting white light, the maximum external quantum yield was 0.33%. TCz-F-Cm in the deep blue emission peak at 420 nm is attributed to radiative transitions S1 → S0, the orange emission from TAPC dimer T1 → S0 radiative transitions.

stacking interactions and their photophysical properties closely related model crystal molecules observed that many C-H ··· π interactions in these crystals. TCz-F crystals also present a strong C-H ·· F interactions. We observed π ··· π between adjacent two carbazole units stacked TCz-H and TCz-OH crystals. Further, a pattern structure formed in the crystal structure TCz-F, the other two molecules form a grid-like structure. The interaction between all of these conformations and the plurality of twisted help limit the molecular movement of molecules to activate the radiative transition. In addition, using the density functional theory (DFT) and time-dependent DFT (TD-DFT) on TCz-F, TCz-H and TCz-OH were theory. For TCz-F and TCz-H, many triplet energy level very close to S1, and the spin-orbit coupling of solid phase considerably, both of which contribute to Tn between S1 from crossing. On the other hand, spin-orbit coupling TCz-F and the recombination energy between T1 and S0 are the smallest three solid state system, which leads to non-radiative decay process slowest (FIG. 6b). These factors contributed to a more competitive radiative processes from T1 to S0, resulting in efficient phosphorescence.

In summary, the design and synthesis of a series of commercial / carbazoles synthesized in the laboratory emitter (TCz-F, TCz-H and TCz-OH), stepwise and then adjusted to a hydroxyl group from a fluorine-hydrogen substituent, emitted from the phosphor to achieve the control of the fluorescent molecule. Meanwhile, the emission lifetime which decreases from the second level to the nanosecond range. TCz-F crystals have a strong blue fluorescence, an optical waveguide having excellent performance. After removal of the excitation source, TCz-F-Cm TCz-F-lab and were observed to clearSignificant phosphorescence lifetimes are 727 ms and 48.65 ms. (HPLC) analysis by high performance liquid chromatography, the great differences in their emission behavior due to the isomer of commercial carbazole, can significantly improve the luminous efficiency and lifetime thereof. Theoretical studies have shown, Tn between S1 and small energy gap, the weak spin-orbit coupling and lower recombination between T1 and S0 can facilitate enhanced inter-crossing, to facilitate more competitive between T1 S0 of the radiation process. In TCz-F-Cm is a light emitting layer, a blue successfully prepared, a white light emitting OLED. The full text link: https://www.nature.com/articles/s41467-020-16412