Additive for producing high melting point metal material (3D printing) method in the aerospace and biomedical fields has been widely used, it can be produced in moderate yield high value and complex geometry of the member, but has not yet reached the optimum operating reliability . An obstacle to the application face is understood that the melting phenomenon deposited layer by layer in the process of heating the powder beams occurring. For example, the energy of the powder layer thickness of only a few particles in the absorption problems. In order to address the shortcomings of randomly generated during printing, reproducibly produce high quality parts, an urgent need to understand and control the interdependence between laser parameters and the complex powder puddle dynamics.

Recently, the US Lawrence Livermore National Laboratory Saad A. Khairallah and Wright – Patterson Air Force Base Air Force Research Laboratory and other researchers on \” Science \” reported a the relationship between items and stainless steel powder kinetics defects formed in the metal 3D printing process. 3D printing process for the metal droplets or powder particles discharged from the pool formed by \”splashing\” by using a powder X-ray synchrotron kinetics and in situ observation combining observed during high-resolution printing of spatter events, coupling and the thermodynamic and fluid dynamic model, but also on the \”presintered\” powder bed modeling, 3D printing to study the metal powder particles during scale energy absorption phenomena. Metal 3D printing requires a high energy laser beam or an electron beam melting the powder particles, which will make the particles move. It requires the use of X-ray imaging and modeling to understand the relationship between the beam energy and particle motion. In the powder bed printing, laser or electron beam melting is repeated according to a pre-designed location pattern may be formed of metal layers. Printing typically requires continuous adjustment of process parameters to achieve the desired material structure in the region of the printing member. At the macro level, the laser power must be adjusted, the shape of the beam, the scanning speed, pulse duration and a scan mode, in order to achieve good local melting conditions. In the vicinity of the melting, a laser beam for heating the powder and printing a strong base will produce steam plume, the plume will cause the particles to steam, \”pop\”, away from the heating zone.

initialize the state of pre-sintered powder, to prevent the accumulation of negative charge on the powder due to electrostatic repulsion of the powder motion. 100% of the incident laser power reaches the powder bed surface and energy reflection loss. At low power (92 W), the laser penetration by multiple reflection energy efficient deposition of the powder. Thus at low power, relative to the plate without powder, the powder can increase the presence of laser light absorptance. However, with the power close to 200 W, the overlapping absorbance data indicates lowering effect of the powder. At high power (365 W), the beam center of the top of the bath, the laser focus within the recess, the laser interaction with the powder becomes less noticeable.

relatively high power (300W) of the laser light was suspended in the powder bed particle clusters formed boiling surface of molten ball, and the laser scanning path acceleration expelled. Low power (150W) only a laser particle clusters on the surface of the boiling, and the recoil force which was pressed into the molten bath in the bath depth is reduced by 90%. Since less heat transfer, offset from the center of the cluster can not completely melted, so that the clusters at a height of 111μm projecting portion, which may cause reduced shedding and uneven manufacturing quality. When discharged particulate cluster falls on the laser scanning path, four clusters generate new splash rupture site. Unsintered powder bed, molten spatter may loose powder particles coalesce and form larger clusters and, this process may be repeated.

the laser powerRecoil rate of large transient change will have a huge vapor. When the laser starts to move the beam back and forth will have a great pressure difference causing large size (~ 200μm) to splash. When the scanning is not generated when at constant power of 132 W to splash, but the laser beam moving speed (1m / s) close to the critical limit, this results in a hotter, more volatile, deeper bath. And because large temperature difference at the gas-liquid interface, at the start of pore formation. FIG power end of the power that the recess decreases the display remains liquid, the surface tension which gives time to make the surface smooth. Laser abruptly shut down rapid cooling generates a frozen recess of 43um. 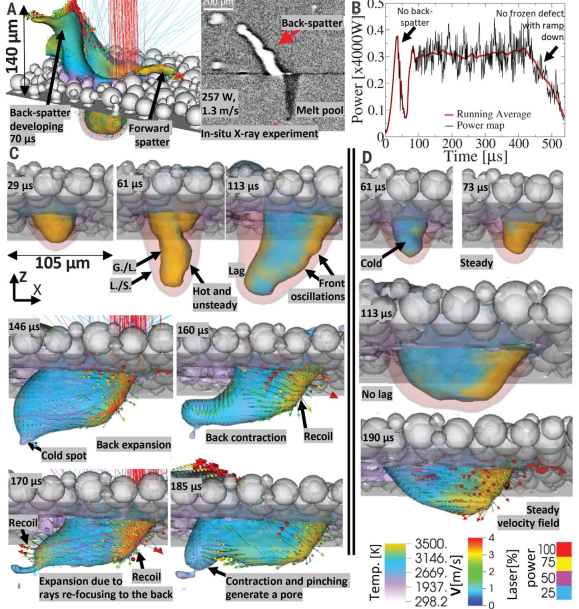 On a macroscopic model was developed, the expulsion of the powder can be drawn according to state laser power and laser scanning speed. This kind of development can solve complex physics phenomena occurring in metal 3D printing process. Such understanding can also help design a new type of metal alloy specifically for 3D printing, thus expanding the current limited printable metallic material. The full text link: