April 24, reporters learned that the Yushu Hong professor at the University of Science and Technology of China (corresponding author) published an article entitled \”Superelastic Hard Carbon Nanofber Aerogels\” in the Advanced Materials. Researchers inspired by nature, by the use of resorcinol – formaldehyde (RF) resin as a hard carbon, a hard carbon airgel and superelastic (an HCA) has a fatigue resistance of the network structure of nanofibers prepared. In this method, a plurality of one-dimensional (1D) nanofibers, including bacterial cellulose nanofiber (the BCNF), tellurium nanowires (TeNW) and carbon nanotubes (the CNT), is used as the structural template to prepare nanofibers RF airgel. Thanks to the structure of the nanofiber web and weld the hard carbon, the resulting HCAs having excellent mechanical properties and structural stability, such as: super-elastic, high compressive strength, high rebound speed and low power consumption. Notably, an HCA\’s rebound velocity (860 mm s-1) than the fastest previously reported rebound velocity lamellar airgel graphene almost 50% higher than the compressive strength of the airgel layered graphene nearly six times. The new HCA achieves a balance between flexibility and strength, can be used as wide-range piezoresistive sensors, and the sensor stretchable and bendable. 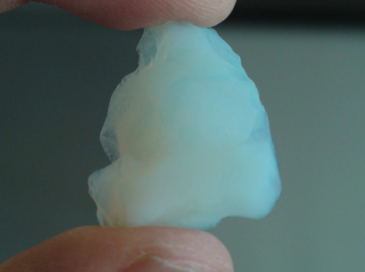 \”Carbon soft\” and \”hard carbon\” is generally used to describe the pyrolytic carbon material prepared from organic precursors by. In the pyrolysis process, the remaining carbon atoms constituting the two-dimensional weight graphite layer graphene sheet structure, if these microscopic graphene sheets are arranged in substantially parallel, then the graphene sheet can easily be rearranged into the graphite layer at a high temperature structure, i.e. graphitization, so that the carbon is called \”soft carbon\” or \”carbon graphite.\” However, if these random microscopic graphene sheets stacked and highly crosslinked carbon atoms formed by the edge, then the transition could not graphitized at a high temperature, the carbon is called \”hard carbon\” or \”non-graphitizable carbon.\” . Different carbon component and the structural unit resulting in huge difference in performance between assemblies (e.g., airgel). 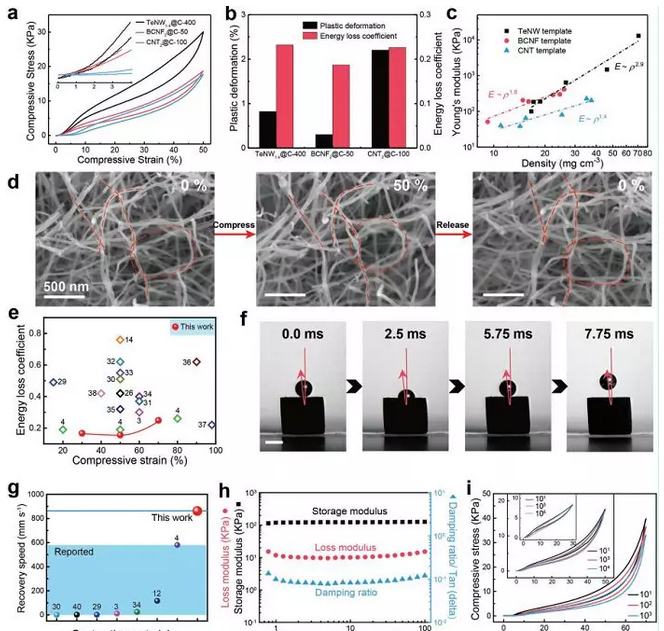 a) BCNF2 @ C-50 carbon airgel current response to stress, illustration shows two linear regions having different sensitivities; b) a change in resistance (ΔR / R0) and the relationship between compressive strain ([epsilon]); and c) a carbon airgel under load current applied to the different – voltage curve; D) at different strain, carbon airgel compression resistance change cycle; E) at 50% strain, elasticity at 100 cycles – resistance response response test; F) comparison between different sensors valid range, detection percentages represent the maximum strain, the numerals in parentheses relevant references; G) carbon airgelAt 1 Hz, viscoelasticity of between -70 to 300 deg.] C; H) indicates that carbon airgel can work effectively in a cryogenic (liquid nitrogen) below. 1D nanomaterials as a template to obtain a phenol resin by a simple nanofiber airgel hydrothermal reaction, followed by carbonizing the airgel can be obtained a solid carbon-based hard fibers airgel. When in BCNF, TeNW and CNT structure as a template, can control physical properties (e.g., diameter nanofiber airgel density and mechanical properties) by simply changing the amount of starting material. Thanks to a large number of welding points between the hard fibers and the carbon nanofibers, the hard carbon aerogels exhibit excellent stability and mechanical properties, including super-elastic, high strength, high rebound velocity (860 mm s-1) and low energy loss factor (<0.16). After the test 104 cycles at 50% strain, carbon airgel displays only 2% of the plastic deformation, and maintain 93% of the initial stress. Hard carbon aerogels may be under severe conditions (e.g., in liquid nitrogen) remains superelastic. Based on their excellent mechanical properties, such a hard carbon aerogels having a high stability is expected to be applied to a large number of process (50 kPa), and a tensile stress sensor or bendable. This method is expected to be extended to the preparation of other non-carbon-based composite fibers, and provides a new method of designing the microstructure by converting nanofibers into a rigid material or a flexible elastomeric material.

下一个：The original airgel material is not only light and warmth, you can also do \”cloak of invisibility\”