Waves constantly! After 5 90 bursts of five CNS brother and sister division within a month! One for all, \”waves are\” How to Make?

May 6, after known as \”graphene pilots,\” the boy genius Cao original 95 respectively in 2018 following back to back in Nature published a major research results, again the first author and co-corresponding author on the Nature even issued two papers. Moment maxed circle of friends, known as the \”tsunami.\” Cao was originally a Chinese HKUST Youth Class 10 students, university teacher Lan Rong teacher. Cao more than the original, in recent days, China HKUST Youth Class is a \”choppy.\” May 1 and May 14, the former Cao\’s two brother and sister division, junior class 09 and 10 Wu Wang Zhai, Jizhu run, first author who has published papers in top international journal \”Science\”.

May 14, \”Nature\” cover the results presented the results of laser radar, unmanned prospects in the future technical outlook. Liu Chun autumn one of the key contributors to this achievement, but also the University of Science and Technology of China 08 Junior College class alumni. He is responsible for the preparation of silicon nitride chip core technology of the Nature results. The silicon chip is based on April 20 published in \”Nature Photonics\” (Nature Photonics) papers. Liu Jun is the first author after the fall of paper. He Jijun (China HKUST Alumni 0938) is among the co-first authors.

Although \”natural\”) the Journal may be more interesting, but many experts also recognized Liu Jun and other autumn as \”Nature Photonics,\” the paper\’s first author. Liu Chun autumn had participated in the 2019 European integrated photonic Assembly by the Belgian Ghent University and the Microelectronics Center (IMEC) organization (ECIO), and do a report on introduced after this was published in \”Nature Photonics\” results. The judges gathered in the General Assembly the authority of the industry. They almost unanimously agreed to grant Liu Chun autumn report of the game\’s only the best students report. The \”Nature Photonics\” paper introduces the silicon chip, brought three Nature papers (which is a cover of the outcome of May 14 Nature published). 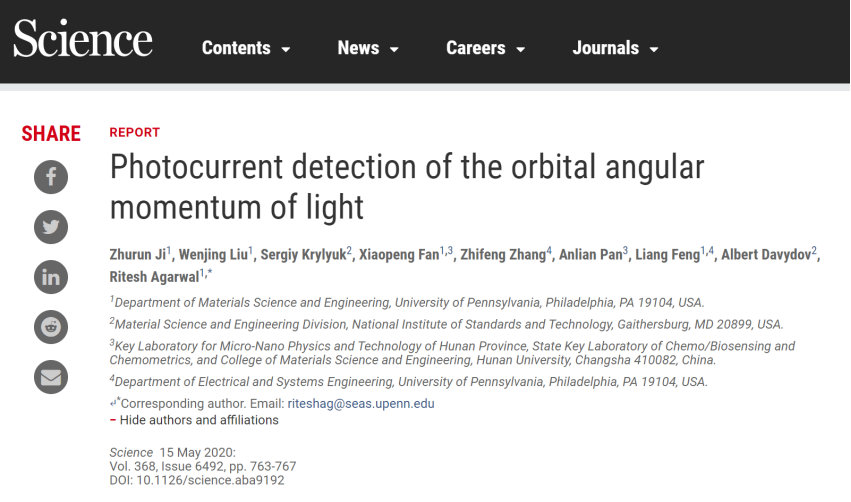 The first author of the study, is from China HKUST Youth Class 10 of Jizhu run. Jizhu run 22 years old, he is one of the first author of the Science article youngest women. According to People\’s Daily reported Jizhu Run is a native of Beijing girl, 13 years old (14 years old may) from Beijing Lixin school admitted to Chinese HKUST Youth Class 10, was the penultimate small class young students. Skip beads as commonplace quarter profit, it does look a lot more mature than their peers. With small, bead-run season is junior class vice squad, as well as innovative research team led by people. \”Probably because I am tall, not when the young girl, Sister had to do.\” Jizhu run so ridicule. Playing the piano since childhood, Jizhu run university time and taught himself to play the guitar and composer, regulars at USTC, or the Festival of school. Jizhu family run background research, a study of biological parents, a geochemical study. When the original study for the platform, advised her: why not pick the field of study of their parents, the future of great help. But in the run beads quarter and teachers to analyze their own interest, the expertise, decisively chose Applied Physics, \”I enjoy the most, is the junior and senior bubble in the laboratory sense, only physicalI really love. \”By 2015, she went to a doctorate in Applied Physics University of Pennsylvania to study American Ivy League universities, student at Dr. Ritesh Agarwal group.

May 1, on-line Science research article entitled \”Evidence for an edge supercurrent in the Weyl superconductor MoTe2\”, and the first author of the study is the USTC Youth class 09 Wu Wang Zhai, the study found that he and his mentor, MoTe2 superconducting material that can carry current, and the superconducting current flow is limited at its edges, the significance of topological superconductivity extraordinary. 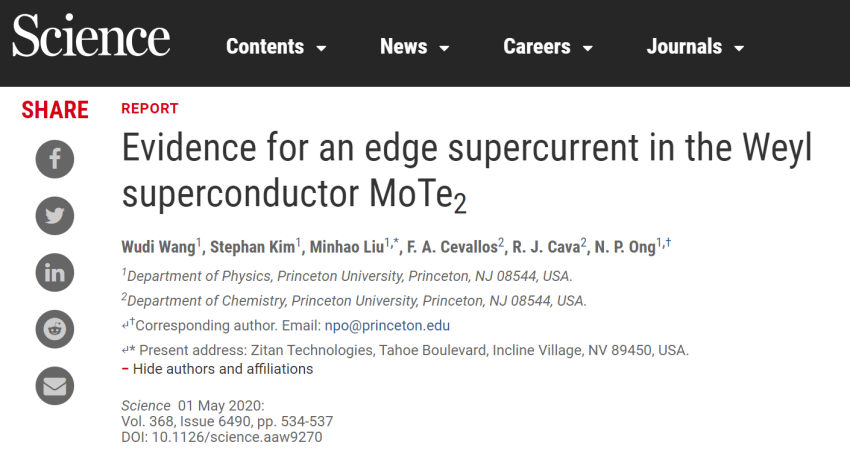 Wang Wu Zhai also from \”learning Pa family\”, according to News Network Fuyang, Wang Wu Zhai\’s father and mother at school also learn Pa. When the mother college entrance examination, the first class, the village became the only college students, high places his father was admitted to the Anhui Agricultural University. This \”school bully\” House, also won the 2015 Fuyang City, \”the most beautiful family.\” In an interview, Wang Wu Zhai mother said: \”My husband and I on the education of children, not just focus only on learning, but also pay attention to the child\’s social skills, thinking quality.\” Wang Wu Zhai kindergarten, parents support him more books, For example, \”A Hundred thousand Whys\”, \”Science fiction World\”, \”five thousand years.\” \”Read more books, reading speed would be increased, but also the child\’s ability to respond to change faster.\” King Wu Zhai mother said they will not suppress the child\’s nature, Wang Wu Zhai love paper cutting, stitching, they support, let him participate in school activities, more students and teachers exchange. Later, they found that Wang Wu Di of science is obsessed with her and her husband to accompany Wang Wu Zhai finished ahead of the third year of the course. During Cao former school in China HKUST Youth Class, elected to the \”excellence Yanjici physics class.\” Like this class scientific and technological excellence HKUST China has built 16. Since its 2009 inception, the elite class has cultivated a large number of \”waves.\” These \”other people\’s children\” success secret?They had studied the \”scientific and technological excellence class\” is what kind of existence? 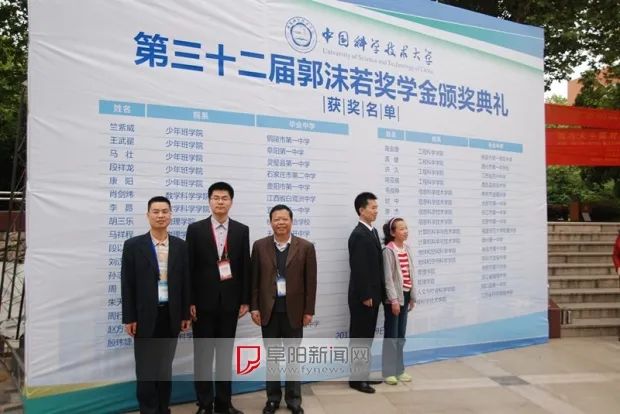 03 USTC Youth Class, \”is how the waves were tried in a professor at MIT mentor Pablo Herrero into? \”

Chen Yang is China HKUST first contact Cao teacher to the original. In 2010, when he was president of Junior College Class of him, when Cao Shenzhen to see the original, the original is learning Cao knowledge of chemistry contest. \”After some understanding, I feel that students of all aspects of the quality is very good, so they encouraged him to apply for China HKUST Youth Class.\” Cao original into the school at the beginning was originally going to study chemistry, then gradually found himself more interested in the physical, then go to the this physical realm, into the \”physical excellence Yanjici class.\”

.\” I received from the student students point of view, China HKUST undergraduate students is the best: high quality of students, with a solid theoretical foundation and a strong research interest. This is the \’class excellence\’ foundation and an important guarantee. \”The evaluation for the China Science class excellence, from the school,\” Zhao Zhongyao Applied Physics class excellence \”and\” in conjunction with the Department of \”school tutor, Chinese Academy of Sciences Ma Yugang\’s mouth. According to reports,\” Real generosity basis \”is the Chinese HKUST 60 years of school precipitation and distinctive characteristics. class more attention to strengthen scientific and technological excellence in mathematics, physics undergraduate foundation and thinking skills. in class excellence training program, the school scores of students of mathematics and physics basic course of not less than 30 credits, accounting for graduation total credits required for the course 20% in the curriculum depth than ordinary students have higher expectations. Zhou Cong photos, said scientific and technological excellence classes focus on individualized and personalized training and strive to break through the limitations of personnel training \”pipelined\”, matching the best teachers , the full implementation of academic tutorial, all-round construction of scientific and technological excellence class management and support system, into a \”focus on basic, enhanced cross, highlighting the forefront\” of excellence class curriculum, the formation of \”science and education, the Department of combination of theory and practice combination\” scientific and technological excellence class training modeformula. 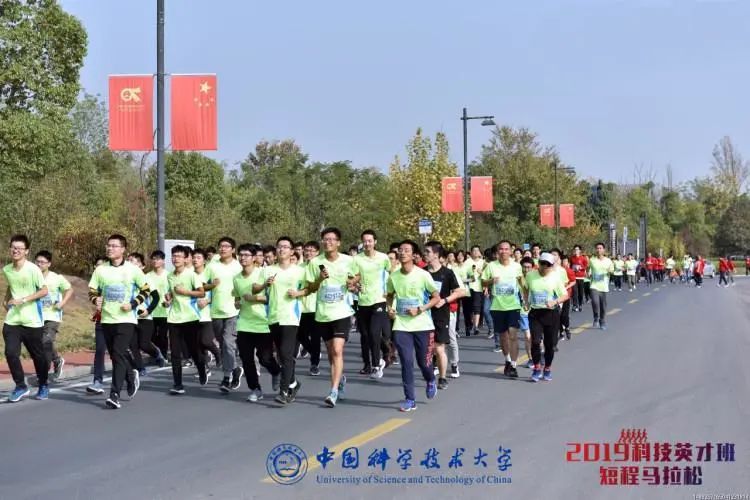 In addition to academic ability, vision, pattern, feelings, these qualities are China HKUST scientific and technological excellence class personnel training an important focal point, but also help graduates of the class of excellence on the road ahead in life continued superior power. Send undergraduates to domestic first-class universities and research institutions to broaden their horizons, is standard practice Chinese HKUST undergraduate training, for the undergraduate class excellence is to strengthen the requirements in this regard. \”In addition to the normal teaching excellence classmates has been to the Institute of Mechanics, Chinese Academy of Sciences, Space Hospitals, five branches and astronaut training center, China Academy of Engineering Physics, etc. to visit and learn.\”