Zhejiang University, Wu Zailiang \”AM\”: When the hydrogel encountered art of smart materials look like?

composite hydrogel principles generally achieved by gel intelligent response to the differential expansion of different materials, and thus have different deformation, such as wrinkling, wrinkling, bending, buckling. But these composite hydrogel typically has a continuous surface, results in a displacement geometric continuity between adjacent regions is relatively limited, resulting in less deformation amplitude. Inspired by cutting art, it is the introduction incision to break the continuity to solve the above problems, i.e., paper cutting (kirigami) method. The multi-step method and the external force of the shape memory combination to achieve conversion between different configurations. The study also shows that, based on paper-parylene film structure can be uniformly wrapped rat heart, thereby enhancing the sensing function of the flexible electronic components. These structures are generally achieved by applying mechanical forces 3D structure passively. However, by limiting the application of these external deformable structure. Recently, Zhejiang University Wu Zailiang et al. designed A composite hydrogel having a paper cutting structure, realize programmable material deformation. Researchers by introducing a series of cuts, separate adjacent composite gel geometry of the connection unit, so that in response to gel band with a higher degree of freedom of deformation and large deformation amplitude. And produced a multi-contact switch, which demonstrated a potential application of the composite hydrogel multistable deformability. The experimental data and numerical simulations show that the design and control strategy of the deformation structure has a certain reference value in different areas of application to other smart materials.

In FIG 1 an example design concept will be described, the hydrogel is a rigid rectangular frame, in order to limit the expansion of the high in-plane Gel Soft expansion; hinge not swollen gel is a soft, it acts to connect a high swollen gel strip and a rigid frame. Thus, four high swollen gel obtained cross bar can be connected by a rectangular frame shape, forming a multi-stable composition. In the absence of pre-treatment, four Gel bent in the same direction after expansion, so that the total elastic energy is minimized (FIG. 1b). After pre-expansion by the step of controlling the direction of each of the high swollen gel buckling strip, the same composite hydrogel can be achieved in different conformations (FIG. 1c, d). Thus, The method may produce a relatively large reflection amplitude, andAnd by pre-treating, to achieve the desired modification effect.

Researchers apply the policy to flexible electronics, a multi-contact switch is designed to control the LEDs. Circuit shown in Figure 3, the expansion member determines the direction of the two ON / OFF state of the electrode, which results in four possible combinations of light emitting diodes.

In addition, the shape of the rotating platform imparting chiral high swollen gel strip may be implemented. As shown, after expansion in water, the gel strip is bent out of the plane through the expansion and twist 4, Will cause the center of the square gel clockwise rotation of 15 °. Such rotation may be superimposed in a multilayer structure, having different configurations to obtain a partial rotation. 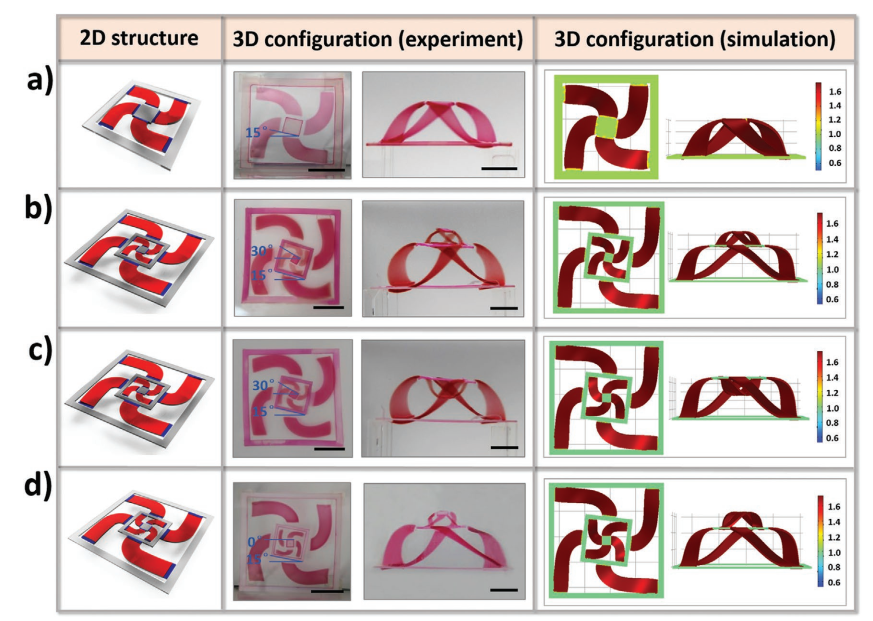 in the hydrogel, to implement the example multi-stable by deformation are rare paper cutting structure, which researchers have proposed concepts and strategies are also applicable to other smart materials, I believe in the future of flexible electronics, biomedical equipment and software robots will also have a certain value. Related content \”Kirigami-Design-Enabled Hydrogel Multimorphs with Application as a Multistate Switch\” was published in Advanced Materials The full text link:. Https: //onlinelibrary.wiley.com/ doi / 10.1002 / adma.202000781